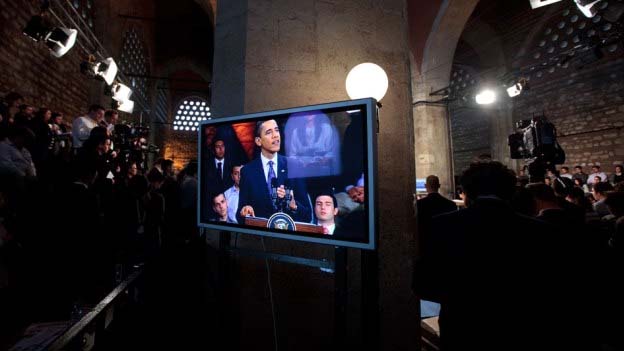 ANKARA, Turkey —President Obama, directly addressing a majority Muslim country for the first time in his presidency, said Monday that the United States “would never be at war with Islam.”

In a wide-ranging speech before the Turkish Parliament in the capital, Ankara, Mr. Obama extended his campaign of outreach to the Muslim world, painting himself as a man who understands it and would seek to build a bridge between Islam and the West.

“America’s relationship with the Muslim world cannot and will not just be based on opposition to Al Qaeda,” he said. “We seek broad engagement based upon mutual interests and mutual respect.”

He drew applause when he said, “The United States is not, and will never be, at war with Islam.”

And in a move with potential political risks at home, he drew on his personal ties to Islam. Introduced as “Barack Hussein Obama,” he told the Parliament that the United States had been “enriched by Muslim-Americans.”

“Many other Americans have Muslims in their family, or have lived in a Muslim-majority country,” he said. “I know, because I am one of them.”

Then he paused. And waited. And, after about five seconds, as the translator caught up, the applause came.

The line was a bold one for Mr. Obama, who has been falsely labeled a Muslim by detractors. The accusations persist on some right-wing Web sites, which may try to interpret the last sentence as proof of those views.

But Mr. Obama, who has become increasingly confident and sure-footed as his one-week maiden overseas trip is drawing to a close, is seeking to use Turkey as an example of the type of relationship that can be struck between the United States and a Muslim country. Turkey is a secular Muslim democracy that is pivotal to American foreign policy goals from Iraq to Afghanistan to Middle East peace.

Earlier in the day, Mr. Obama paid tribute to the memory of modern Turkey’s founding father, laying a wreath at the tomb of Mustafa Kemal Ataturk. In his speech, he lauded Ataturk’s political legacy.

“It is also clear that the greatest monument to Ataturk’s life is not something that can be cast in stone and marble,” Mr. Obama said. “His greatest legacy is Turkey’s strong and secular democracy, and that is the work that this assembly carries on today.”

Mr. Obama also threw his weight firmly behind Turkey’s accession to the European Union, an issue that has split Europe, with France and Germany lobbying against it. “Let me be clear: the United States strongly supports Turkey’s bid to become a member of the European Union,” Mr. Obama said. “We speak not as members of the E.U., but as close friends of Turkey and Europe.”

The comments drew an immediate rebuff from President Nicolas Sarkozy of France. “I work hand-in-hand with President Obama, but regarding the E.U., it’s up to the E.U. member states to decide,” Mr. Sarkozy told French television.

Mr. Obama also waded into the fraught issue of Turkey’s relations with Armenia, and the genocide of more than a million Ottoman Armenians beginning in 1915. Turkey acknowledges the killings but says they were casualties of war, not a systematic genocide, and has vehemently opposed the introduction of a bill in the United States Congress that would define it that way.

When he was a Senator, Mr. Obama said he supported that view, but during a press conference with Turkish President Abdullah Gul before the Parliament speech, he did not use the word genocide and said that Turkey and Armenia had made progress in talks.

During the Parliament speech, he spoke eloquently of the Armenia issue, saying that “history unresolved can be a heavy weight.”

“Our country,” he said, “still struggles with the legacy of our past treatment of Native Americans.”

Many Turks took pride in the fact that Mr. Obama had chosen Turkey for his first visit to a Muslim country, and said that recognition would help Turkey in its relations with the West and with other Muslim countries.

“It makes me happy that the Islam lived in Turkey is seen as a better version compared with other countries and that the message would be sent out from here,” said Samet Yildirim, a 26-year-old sandwich shop worker in Ankara.

The visit was the latest of Mr. Obama’s efforts to change the tone of American relations with the Muslim world. In his inaugural address in January, Mr. Obama pledged to extend a hand of respect to the Muslim world, a sentiment which he also repeated in his interview with the Al Arabiya satellite television network later in January.

This story has been posted in the following forums: : Headlines; COS - Turkey; Obama; Islamic Issues