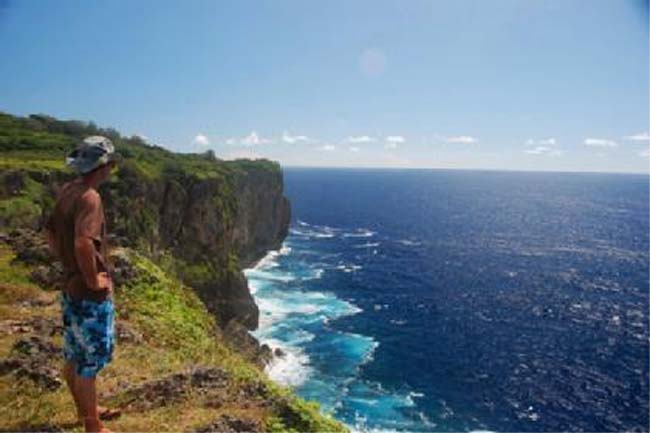 Jason has explored more of the island during his two-year posting than anyone else I encounter. He agrees to accompany me and we set out the next morning in the Hideaway's four-wheel-drive across the partially paved roads that dissect the island. As a result of Eua's isolation and Tongans' general disinterest in development, vast tracts of jungle around us remain untouched, underwater paradises are left to flourish below the cliffs and authentic island life has stayed untainted for generations.

Bones of a great story
Island of intrigue ... the views are worth the journey.

Caption: Island of intrigue ... the views are worth the journey. Photo: Ben Stubbs

Islander folklore hits home when Ben Stubbs stumbles upon evidence of a savage past.

The haunted squawk of a red-breasted koki parrot thrums through the jungle and I look up at the limestone scars on the cliffs; the only indication there is a way out of this canopy. With my eyes off the trail for a moment I run straight into the back of Jason. He is standing motionless before what looks to be a pile of white branches in the mulch. As I take a step closer I see what has stopped him; it is a human jawbone.

Eua is an island of legends. It is a place of Tongan folklore where locals tell stories of gods carving great archways with their spears and Samoan virgins being taken by giant octopuses off the rocks.

As is often the case with extraordinary tales, I hear mine surrounded by drinkers in a bar. I am at the Hideaway Guesthouse in eastern Tonga as the owner, Taki, recounts the stories his parents told him as a boy.

As our beer cans clatter at the feet of the resident cat, Taki tells me the legend of Fangatave, the north-east area of Eua that I want to explore the next day.

"Once when the island clans of Tonga were at war, the Euans were known as the most ruthless opponents in the Pacific. While facing a warrior in battle on the cliffs of the island, the Euans used to kill their enemies and rather than go to the effort of burning or burying them, they would throw the dead into the vast caves of the island or off the cliffs on the north-eastern coast," he says, rubbing his bald head, waiting for my reaction.

I want to see this mysterious escarpment but with the next day being a Sunday, Taki is confined to his guesthouse by law. Tongans are prohibited from engaging in work of any kind, playing sports or swimming in the ocean. I know that Sunday is traditionally known as the day of rest but the 5000 inhabitants of Eua adhere to this suggestion aggressively.

I doubt the jails are full of disobedient Sunday trekkers but I find Jason, an American Peace Corps volunteer stationed on the island, to help me out just in case.

Jason has explored more of the island during his two-year posting than anyone else I encounter. He agrees to accompany me and we set out the next morning in the Hideaway's four-wheel-drive across the partially paved roads that dissect the island. As a result of Eua's isolation and Tongans' general disinterest in development, vast tracts of jungle around us remain untouched, underwater paradises are left to flourish below the cliffs and authentic island life has stayed untainted for generations.

Heading towards the jungle inside Tonga's solitary national park, Jason and I skid through the terracotta mud to reach the cliffs at Lakufa'anga. Walking through knee-high grass we pass the "rock garden", an unexplained collection of coral boulders that sit hundreds of metres above the ocean.

At the edge of the rock face I watch the vast Pacific as the waves smash against Lakufa'anga where giant sea turtles frolic in calmer weather. These cliffs in Eua are the last land barrier before the Tongan Trench, an unfathomable underwater cliff that drops 10,000 metres towards the Earth's core.

Walking back to the vehicle we spy a group of wild horses grazing under the trees.

As they wrestle with mouthfuls of pandanus leaves, they barely pay us any attention. Jason tells me they have never been tamed and they wander through the thick vegetation around the southern tip with the odd fisherman being their only disturbance.

Across the red dirt road in the centre of the island, we drive past Jason's village of Ha'atu'a. It is nothing more than a few tin roofs and a larger-than-usual congregation of pigs but Jason tells me his village is quite well-known because the inhabitants are the descendants of the people from the island of Ata in the south, who were relocated here in 1860 because they were the target of Peruvian slave traders who pillaged the islands for workers.

Parking the four-wheel-drive in a clearing above the Kahana Spring we make our way to the cliffs above Fangatave to begin our trek. With no path to follow, we navigate using nothing other than the far-off sound of the ocean and choose the least intimidating descent when faced with a dead end.

Jason is attempting to set up a walking track that will traverse the brittle spine of the island's escarpment, to provide an established tourist attraction. Last year 3000 foreigners visited Eua.

As we tramp through the clay at Matamahinahopo lookout and through spider webs that stretch and cling to our faces, Jason warns me to watch out for the salato, a nettle that will leave me in agony for days if its barbs scrape my exposed legs.

Jason sets the pace at a slow hike, allowing me to experience the utter isolation of the place and also to let him conserve energy after his latest bout of dengue fever.

After trudging for hours through the tangle of vines and fossilised coral we come to the caves. All along the coast of Eua the cliffs are riddled with limestone caves leading to vast underground reservoirs that provide the villages with potable drinking water. The cavern at Fangatave is 30 metres deep with dripping stalactites and stalagmites.

While we sit under the enclosure against the cool limestone Jason tells me of a sinkhole further towards the interior called the Smoking Cave, where a plume of mist constantly rises from its depths.

A few years ago two climbers from New Zealand decided to be the first to abseil to its bottom. One of the brothers was killed in the descent and no one has dared explore the cave since.

Just beyond the caves we reach a deserted beach that is hemmed in by a wall of coral, and gratefully jump in to cool off. Beyond the sand, Eua hides dive sites that are said to be the best in Tonga.

There are migrating whales throughout the year, schools of gigantic deep-sea fish that navigate the currents around Eua and an underwater cathedral, 30 metres below the surface, which is home to placid sharks and coral gardens seen by only a handful of experienced divers.

Content to establish the trekking side of things for the moment, Jason hacks through the foliage as we traverse the jungle again and search for our path back up to the vehicle. The fungus-covered scrub is devoid of any real wildlife and the unnatural silence gives us chills, despite the humidity.

Walking at even the slowest pace, the humidity draws every bead of moisture from us as we tramp over jagged boulders that tear at our exposed skin and a gnarled varicose knot hangs from the banyan tree blocking our path into the jungle.

Stumbling over lumps of dead coral that poke from the leaf litter, we continue looking for a way up the cliffs as the afternoon light begins to dissipate.

Just as we find a fissure we can climb, Jason spots the body. We pause for a moment over the collection of moss-covered ribs and a jaw that confirms at least part of Taki's story.

White-striped mosquitoes appear and begin to gnaw at my legs and with Jason's dengue fever already slowing him down, we do not linger. Climbing cliffs 15 and 20 metres high, we cling to frayed safety ropes and catch the view across to the vacant ocean and the cliffs of Eua in brief glimpses before we scurry to the top.

We reach the car and make the drive back into civilisation. Family groups of Tongans leaving their church services for the evening wave goodnight.

Content with our trek, Jason and I are looking forward to an ice-cold Ikale beer when we return to the guesthouse and I think we might just have a story of our own to tell around the bar tonight.

The writer travelled with assistance from the Tongan Visitors Bureau.

Air Pacific flies from Sydney, Brisbane and Melbourne to the main island, Tongatapu, with a connection in Fiji. See airpacific.com. Eua is reached by the ferry that leaves every day, except Sunday, from the port in Tongatapu, or by an eight-minute domestic flight with Chathams Pacific, www.chathamspacific.com.

The Hideaway guesthouse has double rooms priced from 70 Tongan pa'anga ($45) a night, which includes breakfast; other meals can be cooked on request. See kalianet.to/hideawayeua, email hideawayeua@gmail.com.

Details on guides and maps, horse riding and whale-watching opportunities on Eua island are available fom the Hideaway.

This story has been posted in the following forums: : Headlines; COS - Tonga