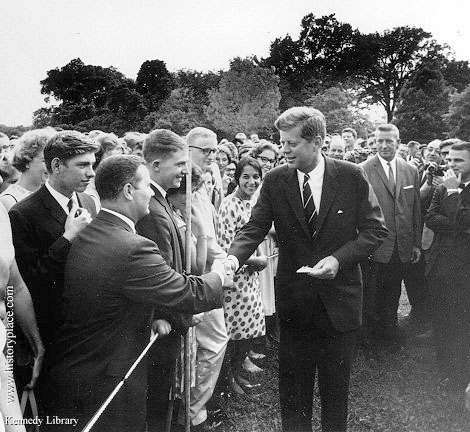 "One easily forgets just how dramatic a departure the five-year rule was. In the early 1960s the conventional wisdom said that a long-serving cadre of proven managers was key to organizational success. Corporations were led by thirty- and forty-year veterans who had worked for only one employer; the military depended on a regular officer and non-com corps, each member of which had dedicated his adult life to the armed forces; academia and the church were no different. Even the houses of congress, despite the requirement of regular elections, were led (at times with an iron fist) by members who measured their incumbencies in decades not years. In such a setting Shriver's policy was not just innovative, it was tradition shattering."

Author P. David Searles served three years as the country director for the Peace Corps in the Philippines in the early 1970's, and two years at Peace Corps headquarters as a Regional Director for North Africa, Near East, Asia, and Pacific (NANEAP) and as Deputy Director under John Dellenback.

When now-legendary Sargent Shriver founded the Peace Corps, he incorporated a number of significant departures from prevailing organizational norms. None was more innovative than the personnel plan he called 'in, up and out'. Later called the five-year rule, the plan required members of the management and administrative staff of the Peace Corps to leave after five years to make room for new people. The aim of this policy was to insure that the Peace Corps was led by a staff that was constantly refreshed by new blood and to prevent the bureaucratic calcification that handicapped so many institutions.

One easily forgets just how dramatic a departure the five-year rule was. In the early 1960s the conventional wisdom said that a long-serving cadre of proven managers was key to organizational success. Corporations were led by thirty- and forty-year veterans who had worked for only one employer; the military depended on a regular officer and non-com corps, each member of which had dedicated his adult life to the armed forces; academia and the church were no different. Even the houses of congress, despite the requirement of regular elections, were led (at times with an iron fist) by members who measured their incumbencies in decades not years. In such a setting Shriver's policy was not just innovative, it was tradition shattering.

Throughout the forty-plus years of the Peace Corps' existence the five-year rule has been followed with only a few exceptions. In 1970 the third director, Joe Blatchford, discovered that a very large number of the overseas staff, especially those serving as country directors, were well beyond their five-year limitations. Motivated partly by his obligation to enforce the existing regulations, but more importantly by the fact that many of these Peace Corps veterans were blocking his efforts to change the organization, he replaced them all. In the ensuing furor over his 'politicization' of the Peace Corps his critics forgot that the five-year rule was designed specifically to remove the 'nay sayers' whose natural inclination was to block new initiatives.

In the 1980s, and to a lesser extent in the 1990s, a few of the highest-ranking staff members exceeded the five-year limitation. The most prominent of these was the beloved Loret Ruppe Miller, whose eight-year reign as Peace Corps director is remembered as a high point by those who served with her. To the extent that anyone complained, her long tenure was explained away by her status as a presidential appointee rather than a Foreign Service Reserve officer.

A somewhat more worrying practice, worrying at least to those who supported the spirit of the five-year rule, also appeared as the organization matured. Former staff members who had been away from the agency for a period equal to the time of their service - as permitted under the legislation - began to reappear on staff rolls. These men and women were quickly dubbed by the first-time staff members as 'retreads.' (In this connection it is interesting to note that a recent New York Times crossword puzzle asked for a one-word definition of "hackneyed work based on an old idea." The answer was 'retread.')

An indication of the immense appeal of serving on the Peace Corps staff -- for me it was the most satisfying job I ever had -- was provided, somewhat indelicately, a few years ago by a departing staff member. In explaning why he favored the five-year rule, he said "otherwise we'd be tempted to hang on to those bountiful tits forever."

Now the Congress is asking itself if the five-year rule and the resulting high turnover of staff is compromising volunteer safety in a world that is very different from the one that existed in 1961. For the first time Shriver's innovation is being reconsidered seriously.

The drawbacks to the five-year rule are widely recognized:

1. There is precious little institutional memory in the Peace Corps. The wheel is constantly being re-invented. (I was astonished to read recently that a program had failed because of inadequate job preparation, faulty host country involvement, poor training, and a high volunteer dropout rate. These are the same problems we had twenty-five years ago! Surely they should have been fixed by now.)

2. The quality of host country participation is eroded because the development of personal relations between the Peace Corps staff and key host country officials is made far more difficult when the American half of the equation keeps changing.

3. Almost invariably the typically short Peace Corps tour provides too little time for mission accomplishment. The staff member who initiates a program is rarely there to supervise its implementation.

4. New staff members need time - in some countries a lot of time - to become familiar with and comfortable with the language, customs, and conditions of service. Just when they master the situation they leave.

There are also well-recognized advantages to the current policy:

2. The bureaucratic ossification that bedevils so many institutions is kept to a minimum. Nothing would so diminish the agency's effectiveness as an 'old corps' mentality that sees the past as sacred.

3. Faced with the Herculean task of achieving -- or at least contributing to -- world peace, in time staff members encounter burnout just as do others in high stress positions. The constant influx of new, unjaded staff members maintains the level of enthususiasm and optimism essential to Peace Corps success.

We must take seriously the security issue highlighted by the recent Peace Corps assessment. Volunteer service has always entailed a certain amount of risk. But, as the research report indicates, volunteers are being targeted at a historically high level. The key question - to which I do not have an answer - is what should be done about it. My only caution is to avoid the tendency to blame the increased anti-volunteer incident level on an irrelevant factor - staff turnover. To my mind high staff turnover is what statiticians call a coincidental indicator. It really has nothing to do with the increase. In fact, I could make a case that a new staff member is far more likely to be super-cautious concerning safety than is the old hand who has seen it all, knows the terrain, and takes pride in being in touch with local issues.

On balance, the advantages of the five-year rule outweigh the disadvantages. This is especially true now that many staff positions are held by former volunteers. They bring with them two or three years of Peace Corps experience, which significantly shortens the learning curve. Add to this the possibility under existing legislation of a sixth year of service in special circumstances - and the presence of some retreads - and the agency's need for stability is being met. But without regular staff turnover both abroad and in Washington, one can almost predict a gradual hardening of the bureaucratic arteries that will eventually make the Peace Corps another of those government entities that do not listen, are not responsive, and seemingly do not care. Prevent that outcome; keep the five-year rule. 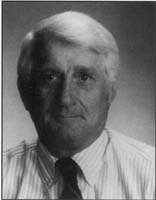 P. David Searles' career has included periods during which he worked in international business, government service and education. After service in the United States Marine Corps (1955-58) Searles worked in consumer goods marketing and in general management positions in the United States, the United Kingdom, Canada and Latin America. His business career was interrupted by a brief stint as a high school teacher (1969-71) and longer periods of service with the Peace Corps (1971-76) and the National Endowment for the Arts (1976-1980).

Searles served three years as the country director for the Peace Corps in the Philippines, and two years at Peace Corps headquarters as a Regional Director for North Africa, Near East, Asia, and Pacific (NANEAP) and as Deputy Director under John Dellenback.

Following the end of his business career in 1990 Searles earned a Ph. D. from the university of Kentucky (1993), and published two books: A College For Appalachia (1995) and The Peace Corps Experience (1997), both by The University Press of Kentucky.

He and his wife live in Owensboro, Kentucky