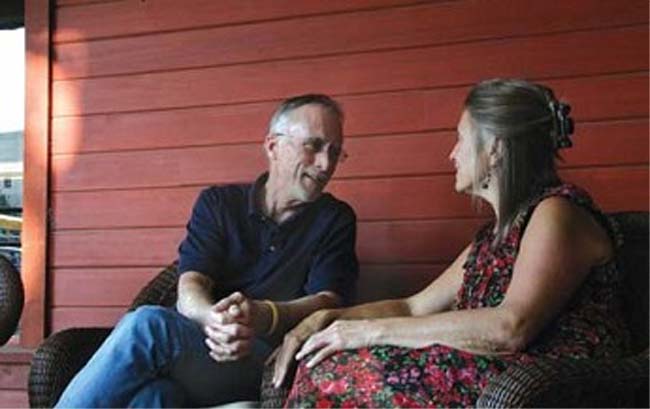 Via e-mail, Rob wrote that last month's tsunami caused no blips in their intention to travel to the South Pacific nation. The couple did, however, surf the Internet in search of blogs written by Peace Corps volunteers in Tonga. One blog, in particular, yielded an interesting description of havoc caused by the huge wave and helped the Becks live the experience vicariously.

By KATHY ANEY
The East Oregonian

Rob and Kathy Beck, a Pendleton couple recently featured in an East Oregonian story, arrived in the island kingdom of Tonga Wednesday. On Sept. 29, several days before the Becks planned to leave Oregon, a tsunami hit the archipelago of 171 islands, wreaking havoc and killing nine people. The mammoth wave also smashed into nearby Samoa and caused 183 deaths.

Via e-mail, Rob wrote that last month's tsunami caused no blips in their intention to travel to the South Pacific nation. The couple did, however, surf the Internet in search of blogs written by Peace Corps volunteers in Tonga. One blog, in particular, yielded an interesting description of havoc caused by the huge wave and helped the Becks live the experience vicariously.

The blogger, Kate Asleson, lives on the island of Ha'apai with her husband Brett, the same island where the Becks will train for two months. That morning started with a call from the Peace Corps warning of an 8.3 quake close to Samoa, just north of Tonga.

The Aslesons brushed it off since little danger had materialized with previous warnings. Brett sat on the back steps eating a papaya and gazing out at the ocean. At first, everything looked normal, but then he noticed some oddities in the surf. He called to his wife to come see.

"It got really still and the water swirled around eerily," Kate recalled later. "...the water started draining out to sea. We could see rocks and seaweed clumps, then almost the whole bottom."

Frightened, the couple grabbed their satellite phone and raced to the road with their dog Lucky and a neighbor. They got a ride with a Tongan reporter who headed up the hill, then to their bafflement, turned around and drove back toward the wharf. Driver and passengers gawked at the scene.

"It was crazy," Kate wrote. "The harbor had almost drained out. (We saw) lots of rock formations that we'd never seen before."

One "big oil boat" sat at an angle on the ocean floor. They caught sight of a huge wave, maybe 15 feet high, approaching the harbor.

"That's when Brett yelled 'Go, go, get out of here' at the driver," Kate wrote.

With dozens of others, they headed to a high spot to wait for things to calm.

Yesterday, in an e-mail to the EO, Kate described the adrenaline-charged retreat further.

" ... it was an intense experience because we didn't know at the time how big the wave would be here - everyone was scared," she wrote.

Ultimately, the damage at Ha'apai turned out to be minor, just harming boats in the harbor. Another island, Niuatoputapu, which is closer to Samoa, reported greater devastation. Three giant waves severely damaged two of the island's three villages, demolishing 90 percent of homes and damaging the hospital, airport runway, schools and other locations.

The Becks seem unfazed by reports of earthquakes in the region Wednesday and a several-hour tsunami watch that followed.

" ... that passed and we proceeded to enjoy our welcome ceremonies, which included traditional dancing, our first kava ceremony and then a big meal," Rob wrote Wednesday night in an e-mail.

The Becks are soaking in the local ambience before the intensive work of learning the Tongan language begins. Ultimately, Rob will teach English to Tongan students and Kathy will instruct teachers.

"We're out exploring the town, about to enjoy a glass of wine and enjoying this perfectly pleasant evening in our tropical paradise," Rob said.

During their time in Tonga, the couple will share experiences in their own yet-to-be-created blog. A link will appear at www.eastoregonian.com sometime in the near future.


When this story was posted in November 2009, this was on the front page of PCOL:

This story has been posted in the following forums: : Headlines; COS - Tonga; Older Volunteers