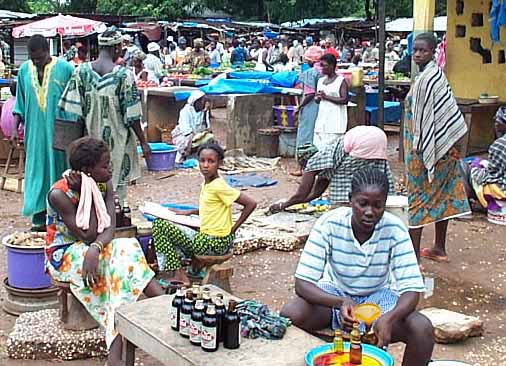 "I'm here for another year. The sense of adventure has faded. I've learned enough about the people to satiate my curiosity. My french is pretty darn good, though I'm still not satisfied by my versatility in it. I've seen a lot of foreign things, but they've become daily for me. I often don't recognize their strangeness unless I force myself to. But I'm staying. I'll stay because (a) I have to: it's a two-year deal and I ain't a quitter; and (b) I still like the place, and don't have such a hard time recognizing the strangeness, embracing it and interacting with it. My being here is equally strange to these people, and often, we don't need much more than to look at each other, recognize our differences, and laugh about them. I have tons of fun in class (when it's not a test week). My students continue to impress me with their curiosity and their devotion despite so little to work with."

Well, it's not quite June 10th-the day I left America last year to come to Burkina Faso and teach Science for the Peace Corps-but it's close enough. By the time I get this posted on the blog, it might be past that date. My thoughts on an entire year of being in Burkina are unlikely to be drastically different three weeks from now. (Plus, given all the running around I'll be doing, I doubt my mind will be in the right set for reflection.)

So, what I have I learned, living for a year in a foreign country? Why did I come in the first place? How have my reasons for coming been affected? And what's going to keep me here for another year? It's due time for some essay-guided reflection.

I wanted to join the Peace Corps for a few reasons. The professional reputation of the service is undeniable. Two years as a volunteer with so much "hardship" is seen as a measure of diligence, devotion, and determination in many arenas. Not to mention, the humanitarian implications of working so hard, and giving up so much to better the lives of a people so distant from us-a people so slightly affected by our daily-doings at home, whose daily lives so minutely affect those of ours in the West over sea, further North over land, and higher up in our skyscrapers. To be concerned for the well-being of such peoples is said to show a lot.

This is, in part, the professional perspective for me. Certainly, I care about these people. I worry for their health and their environment and their education, their self-betterment. But, it's this very spirit that drives me towards my professional goals. The two are in many ways inseparable. So, yes. I joined Peace Corps to help people, but I joined it also to help myself.

Professional opportunities aside, there are many other reasons I joined. Curiosity factored in equally, if not more so. I've traveled in my life. I've checked the Louvre and the Outback off my list. I've seen fjords and beaches, skied down mountains and across water. I've stayed up all night in the place where the sun doesn't set. I've done a lot to satiate my curiosity for new experience by travel. Yet, I was always frustrated at how quickly I had to leave. How I only got to see the surface of things. I only struggled with language long enough for an English speaker to walk in the door behind me. My curiosity drove me to seek new places in a different sense. I wanted to see a place, but get past its surface. I wanted to meet its people and learn about them. A place and it's people are co-dependent, and it's absurd-I thought-to just see a place and keep your feet moving. I wanted to understand the place. The place didn't particularly matter, as long as it was new and shocking. So, I came to Africa. (Yet, I've realized that this word is that of a passer-by-someone who takes in all of "Africa" in one fell swoop, throwing it all together into one general category. I've realized that the peoples of Africa are so diverse themselves that I no longer feel comfortable saying "I came to Africa." I came to Burkina Faso is more precise. And still, the ethnic groups here are diverse enough that even those terms seems insufficient.)

I also came for the adventure. There is no insurance in the 3rd world (well, hardly.) There are few hospitals. There are snakes and torrential rains and scorching heat, vicious sunrays, HUGE language barriers, strange foods, strange music, strange faces. And I wanted to be thrown in the middle of it all. I wanted the exhilarations and utter confusions of in-your-face foreignness.

I also came just because. And because it's the best time to do so. No mortgage or debt or kids to raise. No job left behind. Plus, there were peripheral benefits: the opportunity to learn another language, to have a change in perspective, to maybe pick up some sweet souvenirs.

But I never thought very much about what this service would do to me. I thought, a year ago, that you can't understand a place until you understand its people. And I still think this is true. But back then, I didn't think about those people's affect on me-or maybe even the effect I'd have on them. It was the disposition not of a worker or a volunteer, but of a traveler, still just passing through, albeit slow enough to taste it.

Well, a year being here, and I've found a few things out. I'm reassured in my conviction that you've got to live there to understand there. But understanding is not synonymous with embrace. There are many things I've come to understand about this place and its people, much of which I will never embrace myself. I've found that in a culture like this, so far removed from my own, there are things I'll never reconcile-basic, believed truths that aren't shared, nor capable of embrace by an outsider (at least, this one). Things like gender equality, work ethic, or even the role we play in our own future or demise.

There's no doubt gender roles are different here. Women do an awful lot of work, and their education is often not a priority (despite a government agenda very much in favor of the latter). It's hard to work in the heat sometimes. But I was raised to do my job anyways. To go to school despite a fever of 103, to brave the cold or the heat, to stay up all night studying if there's still a lot left to understand. I'm not saying so much work is a positive thing. There IS such a thing as excess. But, the contrary is (I'd say) worse. Most people here take a mid-day nap. That's an awful lot of wasted sunlight in a place without electricity. The heat is often an excuse to just sit and stare. If it's not the rainy season, and therefore there's no farming to do, many don't work at all: not towards their own betterment (when they'd have the time!), nor to the betterment of their communities. And, finally, there's a short-sightedness: people often do not (or…refuse to?) see the role they play in the world they live in. They see neither the positive effects they could cause, nor the negative effects they perpetuate. An old man with three wives who do all the work doesn't stop and think that by doing nothing, the inequalities of gender perpetuate (if not progress). The same goes for a teacher who speaks to his or her students in local language outside of class (and not French, which is-perhaps unfortunately-the language of education and development.) Furthermore, that man doesn't realize that he can be an active agent of change; that he can, for example, send his daughters to school, relieve them of housework so that they may study. Or, god forbid, even help them to study and understand their schoolwork. The same goes for a man cutting down trees in a region in danger of desertification. (This is happening behind my house as I write this.) It won't dry up today or tomorrow. He doesn't see 50 years down the line-his suffering grandchildren.

Being here this long, I realize that I am so very different in the way I'm raised. I can, in fact, connect with these people on many levels. And then, there are so many ways I can't. This is a frustration, but also a consolation-it reassures me of where I belong, making me proud of where I'm from, makes me love my own people despite what faults they have. There are positives here that Americans lack-close family ties and friendly relationships between professionals (speak to my father about "lawyers nowadays…"). And, yet, I'm okay with what we lack. Perhaps as a result of this service, I'll be more an advocate of the good things I learn here. And my people will embrace that it me.

But I'm here for another year. The sense of adventure has faded. I've learned enough about the people to satiate my curiosity. My french is pretty darn good, though I'm still not satisfied by my versatility in it. I've seen a lot of foreign things, but they've become daily for me. I often don't recognize their strangeness unless I force myself to. But I'm staying. I'll stay because (a) I have to: it's a two-year deal and I ain't a quitter; and (b) I still like the place, and don't have such a hard time recognizing the strangeness, embracing it and interacting with it. My being here is equally strange to these people, and often, we don't need much more than to look at each other, recognize our differences, and laugh about them. I have tons of fun in class (when it's not a test week). My students continue to impress me with their curiosity and their devotion despite so little to work with.

And the adventure hasn't totally worn off. There are days, yes, when it all seems old-news and jaded. Days I don't want to go outside and struggle in another language. Days I just want to grab a cold one with chips and salsa from the fridge, park my ass on the couch and turn on Seinfeld. But there are also days I walk outside, excited to take it all in-realizing that my time here, while long, IS limited. Knowing that inevitably, no matter how much I do here, I'll soon be looking back, wishing I'd done more.

I'm staying because now, after a year teaching, I'll be so much more effective next year. Because I'm less a traveler than a teacher. I'll connect so much more quickly with my students. I'll open doors to them that their Burkinabe teachers never thought to, or never knew how to. And I'll stay because my french will still get better, and I'll pick up some very strange (to Westerners, at least) local language on the way. And I'll stay because there's still so much more to see.