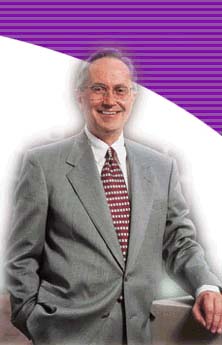 Dean Sullivan's Bio
Dr. Robert S. Sullivan, an acknowledged leader in global business education, the application of technology to learning, entrepreneurship and the commercialization of new technologies, has served as dean of Kenan-Flagler since January 1998.

From 1995 to 1997, Dr. Sullivan served as director of the University of Texas at Austin's IC2 Institute, a nontraditional international center for research and education on innovation, creativity, capital and commercialization. He held the J. Marion West Chair for Constructive Capitalism in the university's Graduate School of Business.

Dr. Sullivan served as dean of the Graduate School of Industrial Administration at Carnegie Mellon University from 1991 to 1995. During his tenure, the school's rankings rose dramatically. He led a complete reengineering of the school's educational programs, including integrating advanced technology into the field of finance and creating experiential and international distance-learning opportunities for students.

From 1976 to 1991, Dr. Sullivan served in a variety of posts at the University of Texas, including the Joe B. Cook professor of management and associate dean for research and academic affairs in the Graduate School of Business. He was co-director of the Center for Technology Venturing, director of the Bureau of Business Research and director of the Manufacturing Systems Engineering Program in the College of Engineering.

It's 1976 in Ethiopia. The Great African Drought is robbing an impoverished population of what little food it has. The devastation leads to political strife, an overthrow of the government and violence.

This is not just a story from a page in a history book; Kenan-Flagler's new dean has lived it. Dr. Robert S. Sullivan went to Ethiopia in 1968 as a Peace Corps volunteer. During the last days of his seven-year stay, Sullivan wasn't most concerned about his safety or the historic political events taking place around him. Bob Sullivan was too busy for that - busy adopting two Ethiopian children, ages 3 and 4. "They were neighborhood children," Sullivan says. "I felt a need to do something, whatever I could, to make a difference." Sullivan says he hopes also to make a difference at Kenan-Flagler, where he assumed the post of dean Jan. 1. "I'm not interested in going to an organization or community to maintain the status quo," he says. "What I enjoy is giving an organization a new direction that hopefully others will buy into."

Setting the Vision
Sullivan's vision for Kenan-Flagler is to build on its strengths and focus its efforts to fulfill three roles: that of a knowledge organization, a member of a global network and an innovator, teaching students not only how to create ideas but how to create wealth and contribute to the community. "All of the organizations we deal with, whether in manufacturing, health care or in the public sector, are also knowledge organizations," Sullivan says. "Their ability to compete successfully depends on the ability to gain and use knowledge successfully - better than their competitors. We must be able to access information in real time all across the world. If we are not doing that in our programs and with our students, we're not doing them a service."

Kenan-Flagler is well on its way to becoming a leading global business school, Sullivan says. Most noticeably, the School made a commitment to technology in the new McColl Building, installing an extensive fiber-optic network and giving every desktop Internet access. That infrastructure will support his efforts to expand student and faculty participation in the global business community. "A focus for us will be developing unique programs that build on best strategies to create alliances worldwide," Sullivan says. "We have the responsibility to do it for the sake of our students and the value that they'll bring to their careers and the organizations they join." Sullivan recognizes the challenges to going global. First, it requires defining a clear vision of what it means to be a global business school. Second, the School must make sure the local community supports its ventures far away. "We must clearly articulate what makes a global business school a good thing and an absolutely necessary thing for the citizens of North Carolina. The state benefits substantially from the global links established at Kenan-Flagler." "Responsibility" and "service" are two words Sullivan uses frequently when describing his vision for Kenan-Flagler. Sullivan wants to strengthen the School's relationship with companies locally and worldwide, and believes his background as an academic and a businessman will help the faculty and students meet that challenge. "It's time for us to lead - to define business education for the 21st century," he says. Sullivan's third focus for Kenan-Flagler is innovation, specifically, innovating to create market value. "It's the entire issue of how a job, company, venture or industry occurs; how economic development occurs," Sullivan says. "Even though we may be educating individuals who will go into a Fortune 500 company, they have to behave in an innovative or entrepreneurial way. They have to be able to take an idea and create market value. They have to create jobs."

A Passion for Innovation
Sullivan comes to Kenan-Flagler after serving as director of the University of Texas at Austin's IC2 Institute since 1995. IC2 stands for innovation, creativity and capital, which sum up Sullivan's major interests and experiences in business education. "The Institute focuses on taking science and technology discovery and creating market value," he says. "It focuses on how we can take discovery to the marketplace so jobs are created, companies are created and industries are created, all of which affect economic development. These issues, ultimately, impact community well-being." Business students, then, must learn not only about innovation but be able to innovate, Sullivan says. They must be able to reinvent themselves, as well, to adapt to the marketplace and keep the economy growing. Sullivan has reinvented himself throughout his career to meet the challenges he's undertaken. He began with a mathematics degree from Boston College, later earning a master's degree in production management and quantitative methods from Cornell University and a doctorate in operations management from Pennsylvania State University.

From Penn State, Sullivan went to the University of Texas at Austin for the first time in 1976, where he became associate dean for research and academic affairs in the Graduate School of Business and helped design new graduate programs. As a professor of management, he won both undergraduate and graduate awards for teaching excellence. Sullivan left Austin to become dean of the Graduate School of Industrial Administration at Carnegie Mellon University from 1991 to 1995. After returning to Texas, Sullivan led not only the IC2 Institute but cofounded the Texas Telecommunications Policy Institute and the Institute for Computational Finance. Sullivan also developed a graduate course that is delivered via videoconference to Lima, Peru - the University of Texas' first foray into international distance learning. "One of the greatest ways to learn is not by lecture but by immersion in issues, in culture and in diversity," Sullivan says.

A World View
Sullivan's commitment to diversity and his desire to link business students with people and activities worldwide stem from his own experience, dating back to at least 1968, when he joined the Peace Corps in Ethiopia. The Peace Corps pulled out of the country in 1970, as political upheaval began, but Sullivan stayed behind and worked for National University until 1976. Sullivan adopted his daughter Almaz, now 25, and his son Tadesse, now 26, as a single man. Sullivan's Ethiopian children (a third son, Keith, 25, came with his marriage to Selena Sullivan, a North Carolina native whom he met at Penn State) are back in their homeland these days, but not far off their father's path. Tadesse is setting up export businesses for Ethiopian artifacts. Almaz, perhaps not so coincidentally, led the first Peace Corps delegation back to Ethiopia. She's in her second year as a Peace Corps volunteer.

"We all have something to gain by association and interaction with those who are different from us," Sullivan says. "What we often learn is that we're not so different - except in terms of the opportunities and environment we inherit. We'd be doing all of our students a disservice if we were homogeneous. We'd be a stagnant and stale environment." While Sullivan holds ambitious plans for Kenan-Flagler, he is not prescriptive at this early stage. "What I really need to do is to be listening to students, alumni, industry and faculty to have a better understanding of where we are today. I'm not going to be precipitous about what needs to be done." Based on what he learns from the School community, Sullivan will seek to expand the School's horizons and achievements. "Certainly, the role of information, the role of being international and the role of innovation all are going to be important for us," Sullivan says. "Secondly, what will be important is for us to develop an identity so when someone says in Berlin, 'the Kenan-Flagler Business School,' a light bulb comes on and they say, 'They are the very best in the world.'"

hello,
Very interesting ... however there is an error about when the Peace Corps left Ethiopia. I and my family went to Ethiopia as PCVs in 1970. I worked on the Smallpox Eradication Programme and my wife worked in several health facilities.
Our four children went to Good Shepherd School in Addis Ababa. We returned to the USA in 1973 and the Peace Corps was still there when we left.
leo landkamer
>
Sullivan's commitment to diversity and his desire to link business students with people and activities worldwide stem from his own experience, dating back to at least 1968, when he joined the Peace Corps in Ethiopia. The Peace Corps pulled out of the country in 1970, as political upheaval began, but Sullivan stayed behind and worked for National University until 1976.

Hi!
My name is Aster Weyessa and I was one of Dr. Sullivan's students at Business CollegeAddis Ababa. I would like to get in touch with
Dr.Sullivan.

Dear Dr. Sullivan,
My name is Seifu Tirfe,a student of HSIU,CBA 1969-1973. You taught me Operational Reascearch(OR). Presently working as UNV/UNDP in Malawi. Iwould like to get in touch with you.