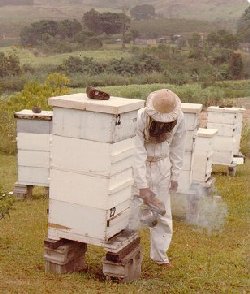 In the mid-1980's, I had an opportunity to serve in the Peace Corps doing rural development work in Fiji. My employer granted me a leave-of-absence. I sold my house and car in Houston, Texas, said goodbye to friends and began my service as a Peace Corps volunteer. Here are a few photos from my experiences.

Fijian beekeeping is described on this page, and Fijian culture on the following pages.

The climate and floral souorces in Fiji are good for bees, but access to equipment and transportation is difficult.I was in Fiji for two years, mainly to provide beekeeping technical assistance to a village cooperative and farmers who were interested in beekeeping.

Beekeeping was viewed by the Fiji government as a potential source of rural income that did not require a big investment to get started. Fiji was a honey-importing country and the country's goal was to be self-sufficient in honey production.

An agricultural worker from New Zealand established some bee hives in the early 1980's and proved the area's potential for honey production. The U.S. Peace Corps was then asked to provide technical assistance.

The cooperative had two employees for me to work with on a honey project called "Saivou Honey." I also worked with several farmers and a shopkeeper who owned their own hives.

We worked entirely with deep hive bodies, since we were rapidly expanding our colony numbers. The hives were on concrete blocks to reduce losses from cane toads.

Finding the queens in colonies of black bees sometimes required us to remove every frame from the hive.The wild bees on the island were the German "black" bee that were brought to the South Pacific by the early European visitors in the 1800's. They are a mean, nasty, bee! They were very defensive, ran on the comb, and the queens were hard to find.

We imported Italian queens and raised our own Italian-German bee crosses that were good producers, though a bit cranky at times.

A woman in the village made our veils from window screen wire and cloth. We made our hive tools from spring steel.

Making equipment locally allowed us to keep more money in the local economy.We made all of our woodenware except frames. A hand-held power saw mounted to the underside of a table became our table saw. We were fortunate to have a generator to provide electricity for the saw and our radial extractor.

Once we had a jig set properly on the saw, we produced many pieces very quickly.

We tried several methods of making wax foundation, but were not very successful. We imported frames and foundation.

Deep frames were used in honey supers as well as brood boxes.Our honey house building and equipment was funded in part by a grant from the U.S. Agency for International Development (USAID).

In the photo at left, Sekove uncaps with a steam knife while Amani extracts and handles the supers.

The selction of available honey bottles was very limited.

Our honey was sold to local shops and also to supermarkets. The honey color ranged from medium to dark amber, and was a fair grade of table honey.

Some of the people that I worked with succeeded at beekeeping, while others failed. The hardest things to teach were regular colony maintenance, and the need to reinvest some money back into the business.

The kitchen houses are separate from sleeping houses, with shelves above the fire to dry wood.Fiji is located in the South Pacific Ocean. It is home to about 800,000 people. Almost half the population are indigenous Fijians, and the other half Indians. A few percent of the population are people of Chinese or European ancestry.

The houses are close together in the village, with farms surrounding.Fiji is a beautiful country and has weather that rarely exceeds 90f degrees in the summer or 60f in the winter.

Housing is increasingly being upgraded with metal roofs and concrete or wood walls and floors.


Most foods are grown locally.

Bamboo is a common building material.

The Fijians children are usually very happy, socially well-adjusted and well-behaved. Many parents in the U.S. could learn valuable lessons on child-rearing from Fijians.

Pride is as important here, as anywhere.Ratu Isikele (left) was my village chief.

He showed me where the "old" village was on a hilltop. Before the European influence, the hilltop provided more protection during war. The old village was near a cave where the women and children hid during battles.

Fijian villages are great places. One's worth is measured more by one's contributions and generosity than by the wealth one retains. There are no taxes. No home mortgage. No insurance payments. The aged are respected. The culture is rich. Nothing brings this out more than the traditional ceremonies held for weddings, funerals, and other inter-village gatherings.

The gifts are presented with a moving speech.There is no way to convey the complexity of fijian culture on these pages, so I will explain a few photographs.

The man at right is presenting baskets of food and a whale's tooth (tabua) to the nearby village where his wife was raised. They had several children, and he is thanking her village. This strengthens the bond between the two villages.

The women, especially, seem to enjoy village gatherings. These women prepare to give a gift of many yards of cloth material to the village they are visiting as part of the same ceremony described above.

Old wars were typically fought with clubs and spears.The creation of a new village was cause to celebrate with a traditional war dance and a feast (right and below).The older people had interesting stories about wars in the old days.

The Fijian meke has some similarity to the Hawaiin houla.Everyone had a great time. The women and a few men performed a meke (story-songs).

I will always treasure my experiences and friends in Fiji.

Children often help with gathering firewood and cooking.My village is Nayaulevu, Ra, located in the interior of Viti Levu island. The people at Nayaulevu grow sugar cane and most of their food crops.

I was often amazed at the resourcefulness of the Fijian people. In the photo at left, some dough is being baked into tasty buns by heating from above as well as below. Coconut husks serve as fuel.

Fishing is most often by spear, net or hand line.The seas surrounding Fiji are rich with life. Fishing by spear, net and hook are skills that most Fijians have.

Mosese and his mother, Uma, (right) are about to prepare our evening meal. Mosese and I speared these sea creatures at night.


No fish size limits or seasons here!The little talapia at left will make a tasty meal at Merevakauca, Ra. The women typically do most of the net fishing.

Sometimes groups of 20 or more women would wade into the sea with big nets to herd and capture the fish.

Almost every part of a killed animal is used.Mariana Nabutu (right) cuts cattle intestine into bite-sized pieces using a sharp piece of bamboo. She has metal knives, but finds the razor-sharp bamboo more effective.

Most homes have mats covering the floor.Making mats from Pandanus leaves (left) was a common skill among women.

My Other Peace Corps Projects

Peace Corps gave me the opportunity to act on ideas outside of my initial assignment and develop them. Some projects were successful and I had a good time trying all of them!

I quickly learned that convincing people to try new ideas can be very difficult, and that doing something myself was often the best way to get projects started.

The key to raising chickens is getting them past the first few weeks.Chicken mortality was very high among young chicks due to hawks and mongoose predation. I built a chicken house to provide protection to the chicks until they were old enough to sleep in the trees.

The village chickens were scrawny but well-adapted to free-ranging. I introduced some fast-growing Cornish-Rock meat birds to the village, but found the hens to be poor mothers. The good news was that crosses between a Cornish-Rock rooster and village hen produced chicks that were faster growing than the village birds. It also had more meat and were still good setters and mothers.

If you're reading this, my web host is too slow!!

Following the success of my chicken house, the local youth group followed with their own chicken coop.

Growing watermelons in a sugar cane field seemed similar to growing pumpkins in a corn field, so I tried it. It worked, but I learned that the young sprouts needed protection from rodents! Unfortunately, watermelons are heavy and hard to bring to market.

The steel mesh in the concrete was also used to join sections.

A reliable clean water supply is not taken for granted in rural Fiji. Pierre (the light-skinned guy below) lived a few hours away in Rakiraki and was one of the nearest volunteers to me for most of my service. He and I worked together on a gravity-fed water supply project for the nearby village of Nabalabala, Ra.

We built this tank to store spring water for the village in the valley.

Toilets were moved every few years.The Fiji Health Department encouraged changing the usual "hole in the ground" out-houses to ones with toilets that had a water seal. The water seal prevented critters from entering and leaving the pit and protected one's butt!

The toilets were flushed with a can of water from the tap or rain barrel.

For a nominal cost, we bought plastic toilet traps, and borrowed molds to build the concrete toilets and base. A few volunteers from my village built about twenty toilets. At left, my Turaga ni Koro (mayor) takes pride in our concrete handicrafts.

i would like to know the present bee farming done, where in fiji, at wat scale it is done, wat r the markets of it,people engaged in this project and problems they face. it would be also good if u add on the type or species of bees used.
actually iam doing a research project on bee farming in fiji and i feel that if this information supplied by you would help me alot.
i would be happy to get information as soon as possible.

I am very much interested in setting up a bee farming project on a medium to large scale production and I don't know where to start looking.
I need assistance and would like to contact the right people involved

I want financial assistance to start bee farming. I have taken studies and as a result I have learnt all the things regarding bee farming. I just need financial help.please contact me on sheikhaltanzil@gmail.com