Author Shay Youngblood joined the Peace Corps and was stationed on Dominica. 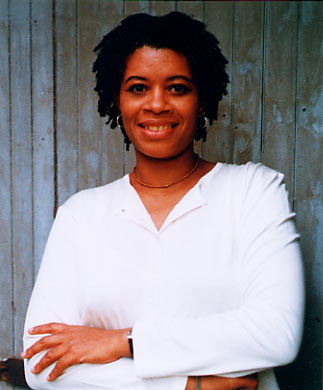 Author Shay Youngblood joined the Peace Corps and was stationed on Dominica.

The cable guy is due to arrive at Shay Youngblood's New York City apartment any time now. That's important to the author of the new selection of the Mercury News Book Club, ``Black Girl in Paris,'' for two reasons: the Fashion Network and the Food Network.

"I'm finally joining the 21st century," she says on the phone. "I'm addicted to the Fashion Network; there's such a glamour queen hidden inside of me! And actually, my other vice is the cooking channel. `The Iron Chef!' I watched the `Iron Chef' marathon for two days at a friend's house on New Year's.''

The food interest doesn't come as a big surprise to anyone who's read her books, which include ``Soul Kiss'' and ``The Big Mama Stories.'' In ``Black Girl in Paris'' there are a couple of recipes, for Pommes Tarte Tartin and Gratin Dauphinois. And readers can be assured that Youngblood has tested the recipes, unlike one she had in a previous book, which turned out to be a disaster when hosts at a reading made her a cake from the recipe: The ingredients were all wrong.

``I love to cook. I was considering a new career as a chef. Then I read `Kitchen Confidential: Adventures in the Culinary Underbelly' (Anthony Bourdain's dishy look at what really goes on in the kitchens of gourmet restaurants) and realized I'd have to be a lot younger.''

Youngblood, 41, has other interests as well. A year ago, she took singing lessons and became immersed in the world of opera. So her next book will involve life in the opera at the turn of the 20th century. She also has been an au pair, an archivist and an artist's model, and she has worked in a library, delivered telephone books and cleaned houses. She drew on all these experiences when creating Eden, the heroine of ``Black Girl in Paris,'' who also had many of these jobs while living in the City of Light. So, yes, Eden is partly Youngblood, but Eden is also many people the author knew when she lived in Paris for a year in 1986.

``I arrived with about $200, having sold everything I owned, and thought, `Now this is it.' I looked around, and it was just not as I imagined. Knowing it was the training ground for the writers I admired -- Langston Hughes, James Baldwin -- I thought I could just breathe the air there and something would happen. I don't know what I was thinking! But I had a wonderful adventure there.''

Like Eden, she usually had just enough money to stay in one place for a few weeks. She found that the young people she became friends with shared everything they had, and they didn't really care where they slept at night. ``Who needed to be inside? Everywhere you look, there's something beautiful to see.''

Youngblood wanted to be an actress, but once integration became an issue and she was bused to a white neighborhood, ``nobody in my family was going to drive to a white neighborhood at night to pick me up'' if she stayed late for rehearsals. Feeling constrained in her small town, she spent much of her time in the local library, reading about other countries and waiting for her chance to travel to them.

She thought about being a journalist or a lawyer, but after getting a degree in mass communications, she joined the Peace Corps and was stationed on Dominica. She kept journals because she knew she wanted to write. And write she did, in an artists' colony in France, in a little cabin in the woods for four months. The stories she wrote became ``The Big Mama Stories,'' inspired by all the women who had helped raise her.

When she came back to Atlanta, she says, ``I suddenly became a playwright.'' When her play, ``Shakin' the Mess Out of Misery,'' was optioned for a film, she wrote the screenplay and got paid lots of money, enough to go to graduate school at Brown University. Her film still hasn't made it to the screen, but Youngblood got to work with Paula Vogel, the Pulitzer Prize-winning playwright of ``How I Learned to Drive.'' Youngblood calls Vogel ``a goddess'' who inspired her. Eventually she tried her first novel, ``Soul Kiss,'' then ``Black Girl in Paris.''

Now Youngblood lives in New York, which she finds vastly different from the small town in Georgia. ``Where I grew up, people were black or white. Now here, there are all these different languages, music. I love the energy; I love the food.'' It's the perfect environment for a full-time writer who also teaches writing. She lectures and conducts workshops, and will be teaching at New York University this summer.

``It can be difficult financially, sometimes. I try to tell all my students to follow your dreams, but keep it simple. I live as though I make $100 a week. It's a very simple life.'' Youngblood is unmarried and childless and says spending several months a year at writers colonies makes relationships difficult.

At many book readings, Youngblood is approached by women who tell her that they, too, were black girls in Paris. And she's always asked if she ever met Baldwin. She tells them no. He lived near where she lived in Paris, and his books were inspiration enough for her.

``By reading them, he made me want to change the world. That's why I joined the Peace Corps. He helped me believe it was possible,'' she says. ``If I met him, what would I have said? What could he tell me? How to write as wonderfully and eloquently as he did?''