Swearing in new volunteers in Russia in November 2000 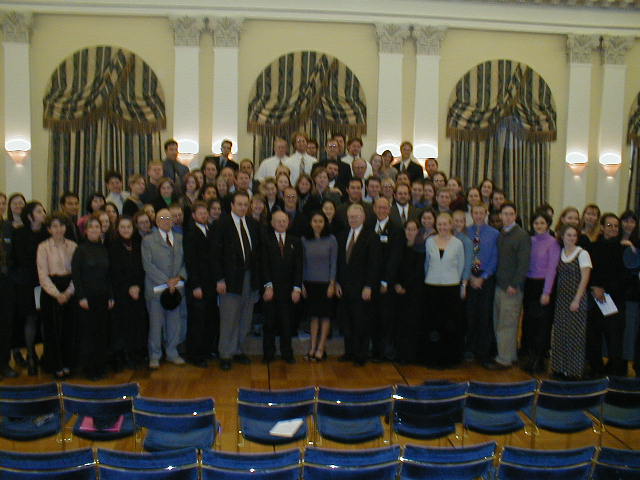 A Message from the Director of the Peace Corps, Mark Schneider: Dear families and friends of Peace Corps Volunteers in Russia

A Message from the Director of the Peace Corps, Mark Schneider

Dear families and friends of Peace Corps Volunteers in Russia:


Mr. Schneider, Peace Corps Director
One of the most rewarding parts of my job as Director of the Peace Corps is to visit with Volunteers at their sites in the countries where they are serving. Since I became director almost one year ago, I have traveled to 20 countries and talked with hundreds of Volunteers. They have told me wonderful stories about the important work they are doing, the friendships they are establishing, and the challenges they face living and working in another culture. What I have learned from the Volunteers has been an inspiration, and it has often reminded me of my own experience as a Volunteer in El Salvador from 1964-66.

A few weeks ago, I had the opportunity to travel to Russia, where I met with a dozen Volunteers who have been working in the country for some time. While in Moscow, I also swore in the 80-strong new class of Volunteers at Spaso House, the residence of the U.S. Ambassador. I thought you might find it interesting to read a little about what I saw in Russia. Most importantly, however, I wanted all of you to know that your family members and friends in Russia are doing an outstanding job as Volunteers, and you can take great pride in the contributions they are making to Russia's development in education, the environment, and small business development.


Ambassador Collins & Volunteers
At the Spaso House ceremony, one could feel a bit of the history of America's relationship with Russia-on the walls you can see photos of negotiators meeting in the Ambassador's residence in the early l940s to finalize arrangements for the "Lend-Lease Program" after the Nazi attack on Russia. As the new Volunteers and I stood in front of the U.S. and Russian flags at their swearing-in ceremony, I recalled how 40 years ago-at the height of the Cold War-John F. Kennedy first launched the idea of a Peace Corps in a brief speech at the University of Michigan during his 1960 Presidential campaign. I thought that even he would have been stunned that Peace Corps Volunteers actually were being sworn in to serve the cause of peace in the heart of the Soviet Union.

The enthusiasm, excitement, and pride of the new Volunteers beamed from their faces. Some were surprised with how much Russian they had learned after just three months of pre-service training; others spoke of the new teaching methodologies they had mastered; and some were even more amazed at their experiences living with Russian families.


Swearing In Ceremony
I told the group that they were breaking the 600-mark for the number of Volunteers who had served in our still-new Peace Corps program, and I reminded them that they would be contributing to the challenging and near revolutionary transition to a more open society taking place in the largest nation on earth, a country whose history had oscillated between tragedy and greatness.

Last year alone, for example, Peace Corps Volunteers working on education projects taught more than 12,000 students in Russia. They trained 1,800 Russian teachers in new participatory teaching methods and contributed to the Ministry of Education's establishment of three teacher resource centers and a center of excellence at the Lipetsk Pedagogical University. Volunteers helped develop four textbooks, along with a workbook on American lifestyles, and at seven sites they obtained grants to finance Internet and education resource centers. And this didn't even count the youth baseball leagues a few Volunteers had started in their villages!

I told the new Volunteers they were about to embark on a great adventure, one that would change their lives and would help change the lives of people in their Russian communities.


The Spaso House
The morning following the ceremony at Spaso House, I drove three hours north of Moscow to Kaluga, site of the North-West Academy of Public Service, to meet with two Volunteers who were well integrated into their academic community: Michele Nelson, a native of Raleigh, NC, with a masters degree in advertising from Michigan State, and Stephanie Hockman, from Lansing, KS, who has a degree in history from the University of Virginia.

The Academy provides senior training in public administration and management to municipal and state-level government officials and business managers. As Russia tries to decentralize power and move more responsibility to local governments as part of its reform program, having transparent, efficient, and accountable systems of administration will be a key factor in its success.

Russian officials have also determined that they need to expand the use of English, the language of international commerce. To help these officials and managers to reach their goal, Stephanie is teaching business English, organizing English language clubs, and exposing her students to new ways of communicating about complex ideas in another language. Michelle delivers lectures on marketing management and has helped the academy obtain a grant to purchase textbooks and multi-media equipment.


First Snow in Uglich
After returning to Moscow, I took a bouncy overnight train (which was a very interesting experience) south to Penza, a beautiful, Peter the Great-era city crossed by broad rivers, and one that legitimately prides itself on its artistic heritage. Sharing the train with me were five new Volunteers who were making their way to their assignments in Penza: Rachel Boynton, a Doane College graduate from Randolph, MA; Sami Hermez, a Duke economics graduate from Durham, NC; Jill Hughes, who is from Northfield, MN, and graduated from Cornell University; Blake Stabler from Carrollton, GA, who graduated from Ogelthorpe University; and Joyce Wiehengn, a University of Missouri graduate from Barnhart, MO.

We were warmly greeted by the city's education chief, ministry officials, and several "veteran" Peace Corps Volunteers-David and Kristin Reinhardt, Simone Bonneville, and Brenda Hrbeck. They told about the contributions they are making in Penza by teaching business education at a resource center, teaching English as a foreign language (TEFL) at primary and secondary schools, and working at a teacher trainer institute. And in every meeting, Russian education officials all reaffirmed the high regard they have for our Volunteers and conveyed their appreciation for the work that our Volunteers are doing.

Russia still has many challenges ahead of it, and our Peace Corps Volunteers are helping the people of Russia meet those challenges. Just as importantly, by living and working at the grass-roots level, by adapting to Russia's culture and learning about its history, and by exposing Russians to Americans and our culture, our Volunteers are fulfilling the Peace Corps' mission and changing the way Russians view our country. After talking with some of our Volunteers in Russia, I also got the sense they are learning a great deal about themselves, just as I did as a Volunteer in El Salvador.


Director Schneider
It was an honor and a pleasure to meet some of your family members and friends in Russia. They are now part of the Peace Corps' legacy of service, and we thank them for the important work they are doing.

I wish all of you very happy holiday season.

For more photos go to the Photo Journal Page