With the Peace Corps in Pakistan, Abbe had poured concrete while helping the Pakistanis build schools and that experience led to his creation, with Louis Kingscott, of the Conceptual Creative Sculpture Division of Kingscott Associates.

Dave Person | Special to the Kalamazoo

NOVI - Whether it was supporting the students and staff of the Parchment schools, which his son attended, or helping a struggling young comedian, William C. Abbe made it his business to help others.

Abbe, 69, an architect with a passion for restoring historic structures, died of cancer June 16. 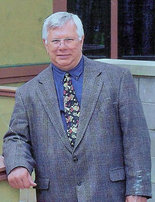 He had been a resident of Novi since moving from Kalamazoo in 2001 and, as an employee of SmithGroup in Detroit, was field architect a few years later for the construction of Ford Field, where the Detroit Lions play football, his son said.

That building, which has undergone a subsequent face lift by architect Jon Stryker and now houses the Arcus Foundation, was restored as a nightclub and reception hall under Abbe, and was the place that actor and comedian Skyler Stone got his start.

Stone, a former Portage resident who now lives in California, said he wanted so badly to have a chance to take the stage at Abbe's Whistle Stop Comedy Club that he told Abbe he had previous experience as a comedian, when he actually had none.

"He knew when I got on stage that I didn't have the experience I said I had," Stone said. "But he didn't say anything."

Instead he put his hand on Stone's shoulder in a way that told Stone, without words, "You've got something; keep going," Stone said.

"He took me seriously when no one else would," said Stone, who now performs in movies and on television.

Brand and Stone both said Abbe and his wife, Mary Jo, who survives, worked in tandem, and had the same passion for Kalamazoo and its residents.

"If there was a need (in the schools or in the community), a financial need, (or) a need for anything, the Abbes would step up and take care of it," Brand said.

A graduate of Bay City High School with a degree from Lawrence Institute of Technology, Abbe came to Kalamazoo in 1973 to work as an architectural project designer for Kingscott Associates Inc.

With the Peace Corps in Pakistan, Abbe had poured concrete while helping the Pakistanis build schools and that experience led to his creation, with Louis Kingscott, of the Conceptual Creative Sculpture Division of Kingscott Associates.

In 1978, Abbe joined Gove Associates, and later owned his own company, WCA Design Build, for many years.

Before the Americans With Disabilities Act went into effect in 1992, Abbe started a business called ADA Group Inc., which determined where and how facilities were in noncompliance with the law and developed plans that would put them in compliance.

In addition to his wife of 34 years and his son, both of whom live in Novi, Abbe is survived by a sister, Rosemarie Abbe, and brothers and sisters-in-law, Robert and Nancy Abbe and Daniel and Sue Abbe, all of Bay City.

A family memorial service will be held at a later date in Bay City. O'Brien / Sullivan Funeral Home in Novi is handling arrangements.

This story has been posted in the following forums: : Headlines; COS - Pakistan; Obituaries; Architecture