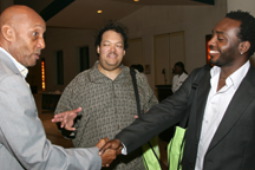 "Wer home is on one of the prettiest streets in the most picturesque towns in the world. Judy Gates loves Marblehead. But, she just spent 27 months in Mongolia, with no central heat, where wintry temperatures linger eight months of the year and the wind cutting across the grasslands can drive the thermometer to 50 below zero. Yet, she said, "I felt more a part of the community there than I do here." Gates, 67, a widow with two grown children and grandchildren, went to Mongolia as a Peace Corps volunteer in 2008. "We all have to figure out what is meaningful in our lives," she said before departing. "One of the most important ways to find meaning is by trying to do things for others." Renting space in a wooden house, Gates enjoyed three rooms to herself but kept to one in order to stay warm. Her biggest challenge, however, wasn't weather. It was the language. It gets tougher to learn, she conceded, as you get older. "But I was able to make myself understood," she said. "I managed fine. And I was able to make many friends." It helped that the Mongolians are now taught English in schools and seem anxious to use it. Further, Gates found them wonderfully hospitable, a trait seemingly belied by their photos - most Mongolians believe it inappropriate to smile for the camera. She was also struck by their respect for elders. "If I go along the street in Marblehead, would teenage boys speak to me?" she asked doubtfully. In Mongolia, Gates heard greetings all day from strangers and from a growing list of friends. "I felt welcomed by little kids," she recalled. We had a very short production period, so planning was of the essence. We could not go over and we could not reshoot. We had to get it in the can in 16 days and we did it. We put together a strong crew who knew how to work under extreme circumstances - people who think on their feet - a virtual "A-Team" led by my DP Danny Vecchione and my sound recorder Allison Jackson. It must have been like this during some of the films in 70s like "Sweet Sweetback's Baadasssss Song," when it felt like the system was against you. But we could not stop, because the film was bigger than all of us. In this case the "system" was time, money, history, language, resources, rain, and grasshoppers."

Fresh, insightful, and profoundly moving, "Kinyarwanda," the first dramatic feature film conceived and produced by Rwandans, is an extraordinary telling of the 1994 genocide that expands the common victim/perpetrator narrative to illuminate the complex fabric of life during the tragic event, and the even more complicated process of redemption in the truth and reconciliation process.

Director/writer Alrick Brown and cowriter/producer Ishmael Ntihabose elegantly interweave six stories based on true accounts-a Tutsi/Hutu couple, a small child, a soldier, a pair of teenage lovebirds, a priest, and an Imam-as they are affected by the Muslim leadership of the time. Little is known about how the Mufti of Rwanda-the most respected Muslim leader in the country-forbade Muslims from participating in the killing of the Tutsi. As the country became a slaughterhouse, mosques became places of refuge where Muslims and Christians, Hutus and Tutsis came together to protect each other.

"Kinyarwanda" plumbs the shades of gray to find humanity in every perspective and offers a rich understanding of what it means to survive unimaginable terror, and the astounding resilience of the human spirit to find ways to heal and forgive. [Synopsis courtesy of the Sundance Institute].

Changing the world through a bigger classroom…

I love movies. I love teaching. I became a filmmaker because I wanted to have a bigger classroom and wanted to change the world using the medium of film.

A script that evolved from the stories of survivors…

The film's Executive Producer, Ishmael Ntihabose, and a former Peace Corps buddy (now co-producer) invited me to Rwanda. They asked me to help out on a film about a priest who sought shelter in a Mosque and worked with an Imam to save lives. When I got to Rwanda, met the real survivors and heard some of their stories, our script evolved.

We had a very short production period, so planning was of the essence. We could not go over and we could not reshoot. We had to get it in the can in 16 days and we did it. We put together a strong crew who knew how to work under extreme circumstances - people who think on their feet - a virtual "A-Team" led by my DP Danny Vecchione and my sound recorder Allison Jackson. It must have been like this during some of the films in 70s like "Sweet Sweetback's Baadasssss Song," when it felt like the system was against you. But we could not stop, because the film was bigger than all of us. In this case the "system" was time, money, history, language, resources, rain, and grasshoppers.
"Kinyarwanda" director Alrick Brown. Image courtesy of the Sundance Institute.

Wait, did you just say Grasshoppers?…

We shot during grasshopper mating season, rainy season, had about 1,000 extras, limited equipment and a sixteen day shooting schedule. The hardest part, however, about making this film was the emotional impact our scenes had on all of our cast and crew, particularly the Rwandans struggling with their own memories.

After a four-hour delay on a deserted road under the heat of the African Sun Cassandra Freeman (Lt. Rose) got the unplanned tan she needed to play the role. No one could figure out why all of a sudden she looked so intense. When she tried to put her make-up on, it wouldn't blend because she was a shade darker. Most people don't recognize her from her previous roles.

Walking away with a little bit more…

Because of the structure and storytelling style, the film will transfix audiences as a whole, as well as connect with the individual characters and storylines. Our audience should walk away with a little more hope, a little more love, a little more appreciation for life and the power of forgiveness.

Sly, Sigourney, The Beatles (via Taymour), narrative structure and the "Armageddon" soundtrack…

The films that inspired me while making this film, content-wise, are very different. I watched them more for inspiration and motivation. They include "Rocky Balboa" (to pump me up), "Aliens" (to inspire my female soldier lead), a music scene from "Across the Universe" (to inspire me to write) - particularly the rendition of the Beatles classic "Let it Be". Artistically, I had the structure of "Pulp Fiction," "Amores Perros" and "Crash" in mind as I wrote. Emotionally, I carried the weight, innocence and joy of what I felt during my first screening of "Life is Beautiful." And every morning before breakfast? A shot of Aerosmith's "I Don't want to Miss a Thing" from "Armageddon" blasted to the ceiling!

I have a few scripts going right now and I am negotiating my next feature with a very prominent independent film producer. We should be going into production mid-2011. I am also co-writing another feature slated for production in 2011. It should be a fun year.

[indieWIRE invited directors with films in the Sundance U.S. Dramatic & Documentary Competitions as well as the World Dramatic & Documentary Competitions and NEXT section to submit responses in their own words about their films. These profiles are being published through the beginning of the 2011 Sundance Film Festival. To prompt the discussion, iW asked the filmmakers about what inspired their films, the challenges they faced and other general questions.]

This story has been posted in the following forums: : Headlines; COS - Sierra Leone; Film; Documentaries; Television; Black Issues; COS - Rwanda