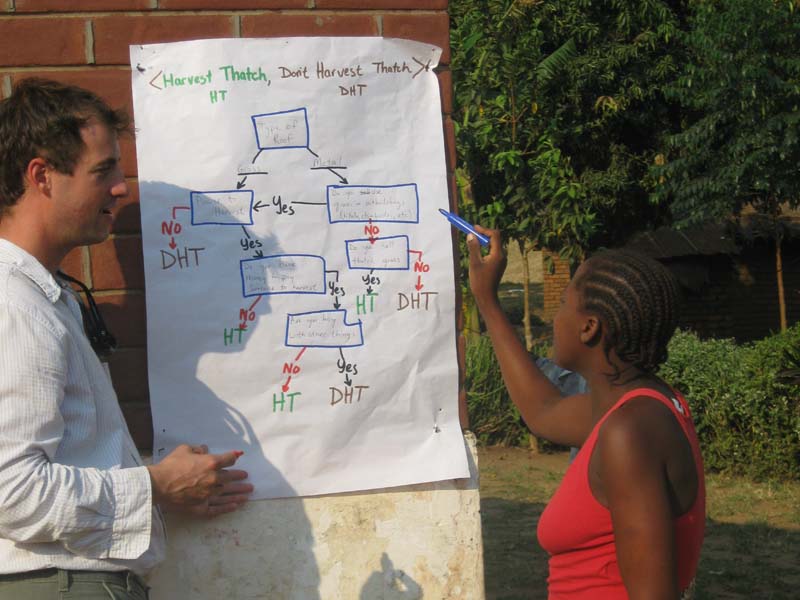 John's research team built ethnographic decision tree models in order to better understand villager decisions. The models revealed that although most villagers valued the forest and its ecosystem services, these factors were not incorporated into decisions of whether or not to make charcoal in the forest. Instead villagers made their decision based on availability of farm land, opportunities for other types of employment, and possession of the strength and skill to make charcoal. This finding suggests that although environmental education from the forest department and surrounding NGO's is effective in teaching people the importance of the forest, additional steps need to be taken to empower villagers to make more sustainable choices.

John Dudley Fort (RPCV Malawi ‘04-‘05) has a long-standing passion for balancing the interests of people and the environment. Even before his Peace Corps service John was interested in ways to get people talking about these issues. During his tenure at Deep Springs College, John participated in an interdisciplinary team comprised of ranchers and federal, state, and local environmental agencies. Traditionally at loggerheads, these groups achieved a level of dialogue which allowed its members to work across boundaries to balance human and ecological interests.

"The HRM [Holistic Resource Management] meetings were my first exposure to multi-stakeholder environmental decision-making. It was fascinating to see these different personalities coming together to tackle the same problem but from different angles," John recalls.

After Deep Springs, John transferred to Swarthmore, a high-caliber liberal arts college outside of Philadelphia. John's biology coursework at Swarthmore allowed for even deeper focus on the intersection of human and ecological concerns. 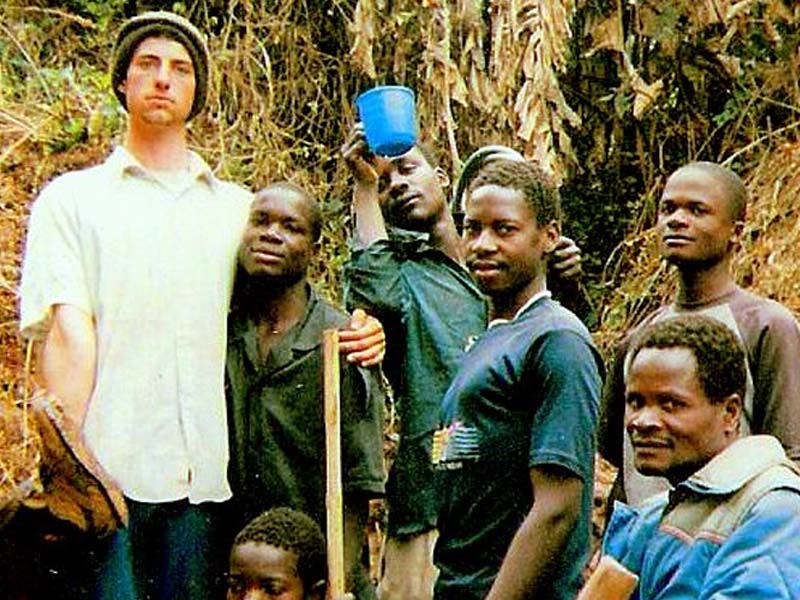 Shortly after graduating from Swarthmore in 2003 John joined the Peace Corps and traveled to Malawi to work as an agroforestry extension agent near the Ntchisi Mountain Forest Reserve. Living and working in the rural village of M'pamila greatly deepened John's appreciation for the way in which personal relationships add meaning and value to a person's life. "Living in the village was a whole new lifestyle for me. Time moved differently. Work happened at its own pace. Meals were really important for sharing and connecting with neighbors. It challenged me to adjust, but I learned a lot. What I realized was that you don't need a lot of material goods to be happy, but to get by without a lot of stuff you do need human connection," John remembers.

During his Peace Corps tenure John was involved with several projects, each of which sought to meet human needs without compromising the natural environment. In homage to the Heifer Project, John purchased a pair of pregnant milk goats and brought them back to his village. John and his host-brothers (Stiya and Lighton Zimba) constructed a two story goat-pen to protect the goats from the night time dangers of hyenas and wild dogs. The two Saanen goats, notable for their snow-white fur, went on to have many kids and give ample milk to John and his neighbors.

John related a story about how his goats went on to affect the local gene pool, "The first offspring of one of my female goats was a buck. He used to break free and do a lot of "visiting" the neighbor's herds. When I went back to Mpamila in 2006 and again in 2009 I noticed an increasing number of snow-white goats mixed into the local herds. More than one of my former neighbors took it upon themselves to point out that those white goats were descendants of the goats I first brought to the village in 2004. I guess it's actually a good legacy to leave behind, it just wasn't exactly planned."

In another project John worked with his neighbors to renovate a local spring. Households in the community traditionally used the Mtambe waterhole solely for bathing and washing clothes because trampling by livestock made the water unsafe to drink. Following training from DFID and WaterAid John and his neighbors created a plan to clean out the spring and enclose the spring head to protect it from contamination. "Water-work" is traditionally women's work, so this project required several important community dialogues to get buy-in from the neighborhood men. After a successful agreement and several days of hard work the spring was cleaned out and protected with a structure delivering clean, potable water.

"I loved the Mtabme project because there was a great esprit de corps. It was wonderful to pal around with the guys that I knew from around the village but hadn't really worked with that closely. To be honest it reminded me of doing work parties at Deep Springs," John recalled.

Upon return to the U.S. at the end of 2005, John worked a series of odd jobs: online page rating for Google, waiting tables, guiding wilderness trips for troubled youths, and managing the office of a healthcare professional. In 2007 he went to work as a lab manager and technician for a research lab at Florida State University. He spent two years at the lab deepening his knowledge about the biological aspects of natural systems. In addition to running a field site, collecting biometric data, and managing experimental populations of plants and insects John did "human relationship work" within the lab. With permission of the lab faculty he designed and facilitated a series of discussions about how members of the lab could better meet the National Science Foundation (NSF) requirement for "Broader Impacts." One outcome of these talks was the creation of a natural history photo exhibit to inform the local community about the work taking place in the lab and the broader impacts of the lab's research.

After 2 years in the FSU biology lab John found he wanted to do something beyond "pure ecology." Remembering what he learned in Peace Corps about the importance of human aspects in environmental issues, John sought out a graduate program that would allow him to study the interaction between human beings and their ecosystems. John considered several graduate programs focused on coupled human and natural system and ultimately chose to go to the University of Florida's School of Natural Resources and the Environment because their Tropical Conservation and Development program was an ideal setting in which to continue researching the environment and development issues he had encountered in Malawi. As part of his research program John made two trips to Malawi, one in 2009 and another in 2010. This fieldwork generated new insights into how local people near a protected forest reserve make choices about forest-use.

As John explains, "It's an interesting coincidence that the university where I ran the ecology lab (Florida State) was so geographically close to the university where I did my masters (University of Florida). I had no previous attachment to the state of Florida, but as it turns out I had great experiences at these two different top-notch institutions. At both universities I found research opportunities in areas that fit my interests: plant-insect ecology at FSU and human-ecosystem interactions in the tropics at UF." 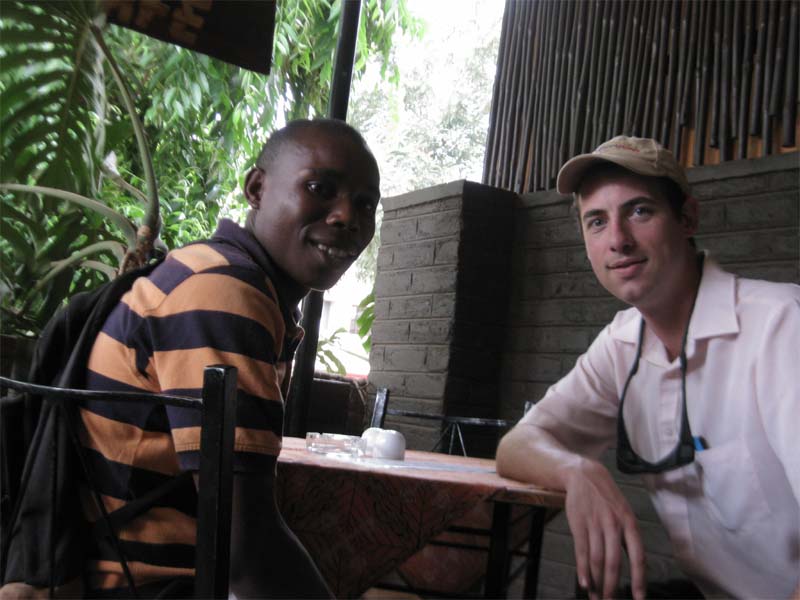 John's research at the University of Florida took him to Mulanje, a district in Southern Malawi famous for its tea estates and the impressive Mount Mulanje. Once again John found himself living in a rural village at the base of a forested mountain. This time, instead of initiating dialogues about development, John and his research team did a lot of listening. Their goal was to understand why some villagers in the area chose to illegally produce charcoal in the forest while others did not. Did considerations about the environment play a role in this decision? "It was clear that many people valued the forest and yet several villagers were choosing to make charcoal illegally. We wanted to get a better sense of the dynamics behind those decisions," John explained.

John's research team built ethnographic decision tree models in order to better understand villager decisions. The models revealed that although most villagers valued the forest and its ecosystem services, these factors were not incorporated into decisions of whether or not to make charcoal in the forest. Instead villagers made their decision based on availability of farm land, opportunities for other types of employment, and possession of the strength and skill to make charcoal. This finding suggests that although environmental education from the forest department and surrounding NGO's is effective in teaching people the importance of the forest, additional steps need to be taken to empower villagers to make more sustainable choices. 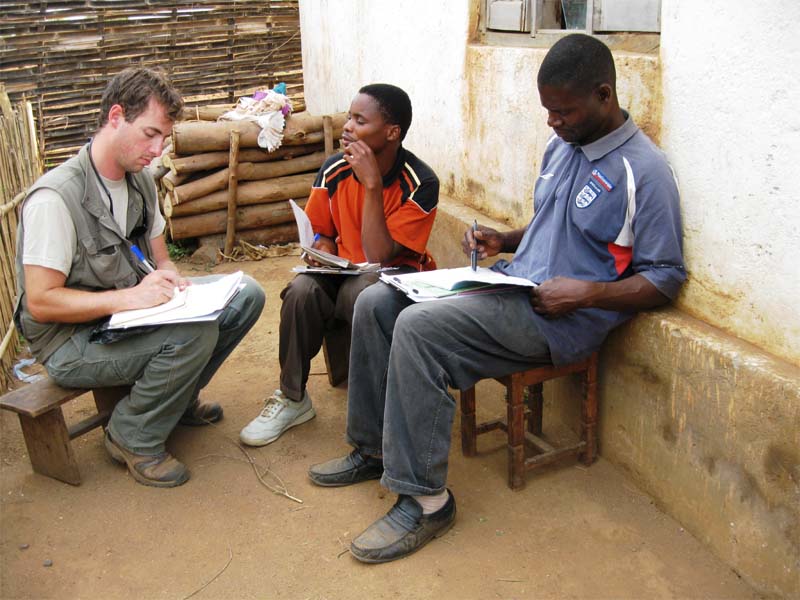 One of the most exciting findings of the research was a suggestion from local men that they form a village group charged with protecting the forest. As these men point out, they are the ones who know their forest best and they are best equipped to protect it from over-exploitation. Furthermore, providing a source of income to families in the village would decrease their need to harvest forest resources in an unsustainable way. John was excited to record these ideas and present them to local government and NGO's. This is exactly the type of information these agencies need to improve their implementation of Community Based Forest Management around Mulanje Mountain.

"My hope for Mulanje is that some of the excitement and passion of local people for making a living can be combined with the conservation commitments of the Department of Forestry Staff and the Mulanje Mountain Conservation Trust," John explained.

In 2011 John returned to the University of Florida to write up his thesis and complete his course work. Over the course of the semester he presented his Malawi forest research at meetings of the Association for Applied Anthropology, the International Symposium on Society and Resource Management, and the Tropilunch seminar series of the Tropical Conservation and Development Program. With guidance from his advisor, Martha Monroe, and his committee members, Marianne Schmink and Peter Hildebrand, John successfully defended his thesis in July 2011 and prepare for his big move west."There was a bit of a time crunch, so I worked overtime to make sure that I could do justice to the research and still finish on time," John recalls with a smile.

Following graduation, John moved out to Claremont, CA to be closer to his daughter. During his graduate work John took two classes focused on the alternative dispute resolution techniques of mediation, negotiation, and facilitated dialogue. He found these approaches to show great promise in creating the constructive dialogues so crucial for resolving environmental issues.

John moved out to California with the intention of becoming a conflict resolution professional with a focus on environmental issues. During his first months in California John networked with a variety of professionals both in the dispute resolution and the group dynamics field. He had the pleasure of being volunteer staff at the annual conference for the Association for Conflict Resolution (ACR), North America's leading professional organization for mediators.

John is excited to be connected with ACR's Environment and Public Policy (EPP) section which specializes in creating and facilitating constructive dialogues about multi-party, multi-issue environmental conflicts. John also earned multiple certificates in mediation first by training under renowned author and mediator Ken Cloke, and second by training under Donald Cripe, a highly experienced mediator working in conjunction with the Center for Effective Dispute Resolution Services (CEDRS) in Ontario, CA."The field of mediation is really an exciting place to be right now. There are so many opportunities to take the established theories and push them to have greater applicability across different scales and in unexpected situations. I'm excited to explore how different technologies can help us to make an even bigger impact on large scale conflicts," John reflected.

John is currently working with faculty at the Claremont Graduate University to create a system for improving the efficiency and effectiveness of public participation in the land planning process.


When this story was posted in December 2011, this was on the front page of PCOL:

This story has been posted in the following forums: : Headlines; COS - Malawi; Environment; Forestry; University Education; Anthropology; Return to Our Country of Service - Malawi