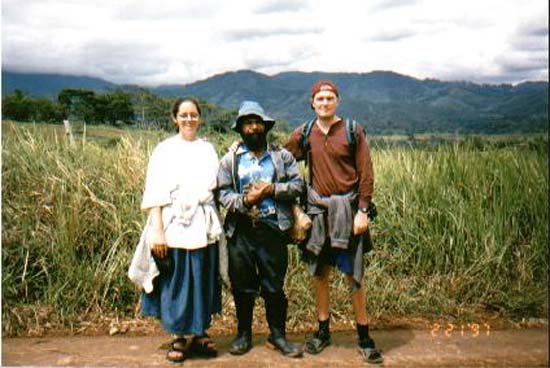 The following pictures were all taken during our training period from January 1997-March 1997. Most of our training took place in and near Goroka in Eastern Highlands Province. The captions refer to our "Homestay". This was a period of four weeks when we stayed with a family in order to learn about Papua New Guinean culture and language. We were surrounded not only by breathtaking scenery, but by some of the most kind-hearted, giving people we have ever known.

The next pictures were taken during our first year of service from March 1998-February 1999 in and near Vanimo in Sandaun Province. During this time, we taught at Don Bosco Boys Vocational School--one of many schools around the world run by the Catholic Salesian Order. This particular school is primarily under the care of a group of Fathers and Brothers from the Philippines. At Don Bosco, we were lucky enough to be close to great natural beauty, wonderful students who taught us as much (or more) as we taught them, and a supportive and kind staff of teachers and administrators.

After our first year of service, we toured around Papua New Guinea during the school Christmas holiday. It was a time of exploring, discovering, and most importantly, snorkeling! We visited one town on the "mainland" called Madang, two areas on the island province of New Ireland called Kavieng and Lissenung, and one town on the seismically active island province of New Britain. Here's a few photos just to give you an idea...

Our second year of service, we worked in the capital city of Port Moresby at Caritas Girls Technical High School. This school is affiliated with the Salesian Order, but is run by a group of Caritas Sisters from Korea. We will always associate our experience at Caritas with the lifetime friendships we made with our fellow teachers, as well as the warm, enthusiastic students we had the privilege of teaching.

This story has been posted in the following forums: : Headlines; Special Interests - Photography - PNG; COS - PNG