Bryan Garcia, 27, served in the Peace Corps from 1995 to 1997 as a volunteer in the former Soviet republic of Kazakhstan 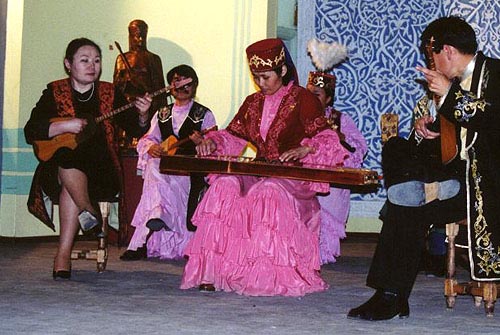 Bryan Garcia, 27, served in the Peace Corps from 1995 to 1997 as a volunteer in the former Soviet republic of Kazakhstan (a region north of the Caspian Sea).

Bryan Garcia, 27, served in the Peace Corps from 1995 to 1997 as a volunteer in the former Soviet republic of Kazakhstan (a region north of the Caspian Sea). He faced sunless days of -40° weather, but the experience, he says, changed his life. Now Garcia is a student in two graduate programs -- the School of Forestry and Environmental Studies at Yale University and the Robert F. Wagner Graduate School of Public Service at New York University. Garcia, whose undergraduate background was in politics, economics and the environment, joined the Peace Corps at a time when he was searching for ways to employ that background in the world. "The Peace Corps seemed like an option that would send me abroad and allow me to apply what I learned in school, have fun and experience new things," says Garcia. When he returned to the U.S., Garcia founded KidsGLOBE, a nonprofit charity that raises money to send scientific instruments abroad for education and research. KidsGLOBE has sent almost 40 instrument sets overseas to countries such as Jordan, Pakistan and South Africa. The nonprofit also gives Garcia a practical tool to apply what he's learning in class. "It makes learning that much easier for me," he says. "What I see going on with KidsGLOBE is what I'm studying."

Monster.com: Where were you living in Kazakhstan, and what were you doing there?

Bryan Garcia: I was in Kostanai, in the north-central part of Kazakhstan on the Russian-Kazakh border. The organization I worked for was called Young Generation of Environmentalists for Sustainable Development. It was really a professor at a university who was totally impassioned about children and environmental education. After her normal college teaching during the day, she would invite students from the local schools to do research projects with her. Through her work with local schools I got involved with environmental education and the GLOBE Program, which is Vice President Gore's environmental education program (to build a worldwide army of volunteer data collectors). Through environmental education, through teaching kids about the environment, you send children out to their local community to take measurements -- easy measurements -- and this data is then contributed to scientists, who now have a worldwide data source through kids. I got involved with implementing that at a couple schools in my area.

Mc: Where did you live when you were in Kostanai?

BG: I lived in a college dormitory. There was kind of this partitioned area where I and another volunteer who taught English lived. We were told that this part of the dormitory was where they sent all of the foreigners. We were told on numerous occasions that this was where the bugs and stuff used to be, and you had to watch what you said because the rooms were bugged.

Mc: Was the language a barrier?

BG: I came to Kazakhstan without any knowledge of Russian or Kazakh. You go through three months of training in language and culture. I lived with a host family out on a farm, a Kazakh family. The other volunteers lived in town, and I was on this farm where I had to milk cows and do all these fun things, but that was an experience in itself. In the end, I came home to a bad situation where the host father was drunk and was beating up the mother. That was tough to deal with. In that part of the world, alcohol, and especially vodka, is a big part of their everyday lives. But I left the three months of training with an okay knowledge of Russian. Once you get to your site, you're basically thrown there with the tools that you have. Within about a month or two months, I had a quick grasp of Russian. You have to survive, and for you to [be able to] shop and do the everyday things, you'd better pick up the language fast. For me it was easier to learn that way than to be taught it.

Mc: Was there any culture shock?

BG: The winters are definitely a shock, but you're prepared for them. You're living in -30° or -40° degree weather for three or four months at a time. That was a shock. The vodka was definitely an awakening. With the men there, I often felt that I had to drink, and after awhile I got used to drinking vodka. When you're at a table with men, and the vodka's on the table, you're expected to drink -- it's part of their tradition.

Mc: What are some of the challenges of being a Peace Corps volunteer?

BG: One of the challenges for a volunteer is figuring out how to approach your situation in an organization. As an American, you come to an organization, and instantly this organization gains credibility. You can start writing grants for it and getting it money, and doing this and that, but is that really a sustainable approach for this type of organization? My approach was to kind of sit back and allow the organization to figure out where it was going to go. What it did was to partner with a local newspaper company, and I kind of filled in now and then, just to point them in the right direction. This local newspaper company began publishing a quarterly journal for the organization, with articles on new environmental education methods, about local teachers, what the students were doing, and it became this huge thing. That's what you want to do. That's a sustainable initiative.

Mc: Overall, what did you learn from the experience?

BG: I left with an appreciation of a different culture, and I left knowing what capabilities I have to impact change or to lead and develop ideas. The Peace Corps took what I learned in college and really gave me a direction, and taught me about the limitations of what I can and cannot do. Now I'm at two universities at the same time, and people ask me how I do it. The Peace Corps has taught me to look at the question differently. It's not about "How do you do it?" It's "Why can't I do it?" It teaches you to jump out of that box and learn more about what you can do.

Mc: Do you have any advice for someone considering the Peace Corps?

BG: If anybody is thinking about joining the Peace Corps, they should. I'm going to be a solid advocate of the Peace Corps until the day I die. It changed my life. It's given me direction; it's exposed me to culture; it's taught me a lot about myself. When you do it, you're just going to be able to draw on the experience. You can think of the Peace Corps, too, as much as an experience as an opportunity. I've seen so many volunteers who are working abroad now, and working in jobs they enjoy, being paid well, and also volunteers coming back and wanting to go back to school and because of their Peace Corps experiences they're now going to Yale or Cornell. The Peace Corps is really a credibility builder.