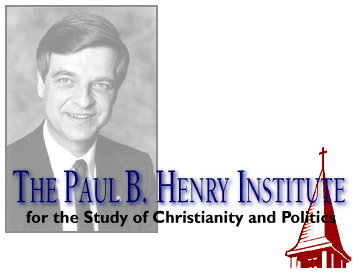 Obituary: We were flying to Michigan to pay our last respects to Representative Paul B. Henry who had died four days earlier, after losing a nine-month battle with brain cancer. Paul Henry served two years in the Peace Corps in Liberia and Ethiopia.

Serving the Claims of Justice

Introduction to "Serving the Claims of Justice: The Thoughts of Paul B. Henry," edited by Doug Koopman (left)

For my thoughts are not your thoughts, neither are your ways my ways. -- Isaiah 55:8

These were two of the lines that played and replayed in my mind on August 3, 1993 as I flew to Grand Rapids, Michigan with dozens of other congressional staff members and over one hundred members of Congress. We were flying to Michigan to pay our last respects to Representative Paul B. Henry who had died four days earlier, after losing a nine-month battle with brain cancer.

Congressional delegations to the funerals of other members of Congress are typical, but this one was unusual in two respects.

First, the sheer number of politicians of both parties flying to Grand Rapids that day was notable and surprising given the acrimonious congressional atmosphere at the time and Paul's minority party status.

Second, this group's affection and respect for Paul, already profound, deepened after participating in a funeral service characterized by obvious and widespread public admiration for Paul. We found ourselves in the midst of a community that not only voted for, but obviously deeply loved, respected, and admired its representative in Congress.

What was his special gift, the source of this remarkable display of affection?

This book approaches these questions, but does not attempt to definitively answer them. Rather, it presents evidence about Paul Henry's personal character and political views that provide some insight into the man and some guidelines for future scholars and practitioners interested in politics, especially its moral and religious dimensions.

Presented here are three types of documents: a selection of Paul's writings and speeches about Christianity and politics, some of his work on policy questions, and reflective essays by a few of his friends and colleagues in academia and politics.

The broad sketch of Paul Henry's life suggests great promise only partly fulfilled. Paul was born in 1942 to noted theologian Carl F.H. Henry and his wife Ruth. He attended evangelical Wheaton College, spent two years in the Peace Corps, and then completed a doctorate in political science at Duke University. After an eight-year professorial career at Calvin College from 1970 to 1978, Paul Henry served six years in the Michigan legislature and nearly nine years in the U.S. House of Representatives until his untimely death.

Paul Henry began his political career shortly after graduating in 1963 from Wheaton and serving the next two years in the Peace Corps in Liberia and Ethiopia. During graduate school in political science at Duke University from 1965 until 1970, Paul spent two periods of time as a congressional staff person working for Republican representative John Anderson of Illinois. Paul's first congressional job was an entry-level position tasked with the most rudimentary jobs in a congressional office, like answering the telephone and running an oily mimeograph machine to put out weekly newsletters.

But his second stint with Anderson was more challenging. By 1968 Anderson had become chair of the House Republican Conference, the party's third-ranking leadership position. Paul served as acting staff director for the Conference in 1968 and 1969. In this position, Paul oversaw all the details necessary to promote a united, collegial, and well-informed Republican congressional caucus.

In 1970, just after earning his Ph.D., Paul and his family moved to Grand Rapids, Michigan to teach at Calvin. His introduction to Calvin, and its introduction to him, is chronicled in the essays by Richard Mouw and Steve Monsma. Paul soon became involved in practical politics, particularly the Kent County Republican Party and the campaigns of various individuals for office. In 1974 local Republicans were shocked when, in the midst of Watergate, a Democrat was elected to the local congressional seat long held by Gerald Ford, who had resigned to become Richard Nixon's Vice President. In the aftermath of that shock local party leaders recognized the need to project an image of the party as more youthful, energetic, inclusive, and intellectually respectable. Paul was asked, and agreed, to become chair of the Kent County Republican Party.

By then Paul’s political skills and ambitions were widely known. In 1975 Michigan's Republican governor, William Milliken, appointed Paul to a seat on the Michigan State Board of Education. In 1978 Paul entered politics full time when he ran for and won an open seat in the Michigan State House of Representatives. In 1982 Paul successfully sought to move up to a seat in the Michigan State Senate. In the spring of 1984 the incumbent Republican congressman from the Grand Rapids area announced he would not seek re-election. Paul entered and won the race to replace him, obtaining a majority in a multi-candidate Republican primary and receiving sixty-two percent of the vote in the fall general election.

He won reelection in 1986, 1988, and 1990, each time receiving more than seventy percent of the vote, usually a higher percentage than any other area candidate did. He was also easily reelected in 1992, two weeks after he was diagnosed with a brain tumor. It was hoped that the surgery that took place only days before the election would lead to recovery. Indeed, for a while Paul did regain his strength, enough so that he was able to attend his swearing-in at the beginning of the 103rd Congress in January, 1993. Gradually, however, he became weaker and died while still holding office on July 31, 1993.

One wonders what political heights Paul Henry might have reached. In Michigan the door was wide open for Paul to attempt a U.S. Senate run in 1994, which would prove to be a banner year for Republicans. And exposure on the national political stage of the mid- and late- 1990s could only have made more attractive Paul Henry’s unique integration of character and intelligence.

But such what-ifs are misleading. Despite its early end, Paul’s life had a profound effect on many people—students, academic colleagues, fellow public officials, his constituents, and others—through his writing, speaking, and actions in public life.

I am one of those persons. I remember the first and last times I talked with Paul Henry. The first was as a young congressional staff member looking for work in early 1984; my boss at that time had announced he was retiring at the end of the year and I needed a new one. I wrote Paul in early May, offering to help in his first campaign for Congress, pointing out my western Michigan roots and Washington, D.C. experience. To my surprise Paul called me back a few days later and hired me to work in that campaign and, later, on his first congressional staff. The last time I talked to Paul was late September of 1992, when I was in the position to hire staff for another new member of Congress. Paul called, promoting one of his own staff as an ideal person around whom to build that new staff.

Both these times, and doubtlessly many times between and before, Paul was as intent on helping others as he was in advancing his own goals. Some of the essays included here, especially that by Steve Monsma, Paul's colleague at Calvin in the 1970s and fellow officeholder in the state legislature, note that same characteristic in Paul, unusual in the political arena.

The primary materials in the book are selected articles Paul wrote and speeches he gave that discuss the interplay between Christianity and politics. These fourteen items, arranged in three sections, cover a variety of themes. In section one is Paul's earliest writing on Christianity and politics. It contains two items dated before his arrival at Calvin College in 1972, but mostly consists of materials from his Calvin years. A common theme in this section is criticism of evangelicals for a deadened social conscience. Sometimes gently, sometimes pointedly, Paul calls evangelicals to expand their concern beyond individual salvation to wider social problems, particularly racial injustice and poverty.

Section two is knit together by a more practical thread. Most, but not all, of these items were written during Paul's time in public service, first in the state legislature and then in Congress, and focus on practical politics. In some Paul chides politically conservative Christians about their style of activism, their view on the legitimacy of politics, and the issues on which they focus. Other articles strongly defend America's governmental and political party systems and individuals' involvement in them. Finally, the section includes a wide variety of documents that reveal how Paul thought about and acted on the issues he faced in elected office. These items detail how Paul applied his understanding to daily controversies. There are constituent letters, House floor speeches, short articles or speeches intended for secular audiences, and other texts that show how Paul thought through policy questions. The issues run from the obscure, such as detailed requirements for federal arts funding, to the momentous, such as starting a war in the Persian Gulf. They also run from the intriguing, such as military aid to the Nicaraguan “contras” to the embarrassing, such as Paul's entanglement in the House bank scandal of the early 1990s.

Four articles present broader and more positive contributions to the integration of Christian faith and politics. “Love, Power, and Justice” and “Christian Perspectives on Power Politics,” in the first section of the book, were written in the late 1970s when Paul was changing careers from academician to politician. The other two, “Reflections on Evangelical Christianity and Political Action,” and “Morality vs. Moralism,” were talks given in 1989. These two articles compose section three and represent Paul's most developed thinking on morality and Christian action in politics. At the end of each of the three major sections are personal essays by Paul's academic and political colleagues. The essays round out and fill in the picture of the remarkable person and engaging personality that was Paul Henry.

Academic colleagues such as Richard Mouw and Jim Penning contribute memories from Paul’s days at Calvin. Political contemporaries such as Mark Hatfield, Paul Hillegonds, Dennis Hastert, Fred Upton, and David Price relate their impressions of Paul during his time in public service.

Published by the Paul B. Henry Institute for the Study of Christianity and Politics at Calvin College, this book is intended to be both a commemoration and a challenge. It honors a dear friend to many, an unforgettable man who, as a Christian, was a gifted political scientist and politician, successful at both endeavors. As such, it is intended to faithfully illustrate to others how Paul Henry integrated his own vibrant Christian faith with high level public service.

The book is also intended to challenge Christians who are political scholars and practitioners. Paul’s views about how faith and public life should interact are certainly within the broad Reformed Christian tradition, but they differ in important ways from other prominent voices in that tradition and, of course, from other Christian views. This book does not intend to settle these disputes, but, following the example Paul gave in his academic and political lives, bring them into the open and address them with thoughtfulness and civility.