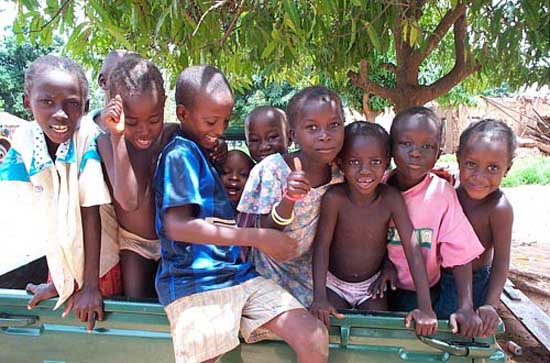 Return to Guinea-Bissau
by Matthew Bremen

I spent this past summer as a U.S. Department of State intern in Guinea-Bissau, where two years before I had finished a stint as a Peace Corps volunteer. Upon arrival, as soon as I left the aircraft, it felt like being home again. It was 2:00 a.m. on a hot and humid night. Familiar faces, smells, and sounds surrounded me. Although it had been two years, it felt like I had left Bissau only yesterday. During the usual hour spent waiting for my backpack, I realized that my experience this time around would be quite different. Not only was I whisked through customs by one of the U.S. Embassy drivers, but my apartment in the U.S. Embassy compound was more comfortable than the apartment I had just left in Washington DC. My work would be quite different too. Needless to say, my Peace Corps days were over. It was time to get used to being a part of the diplomatic community.

To arrange the internship I had written to Ambassador Blackford, explaining my background and my interest in development issues. My familiarity with the culture, languages, and the players in Guinea-Bissau’s local community allowed me to be more specific. I recalled from the Peace Corps that development organizations rarely collaborated on projects, and that duplication and waste were common. I proposed compiling a directory of NGOs working in the country. The proposal was not only enthusiastically received by both the Ambassador and the U.S. AID representative, but I was also tasked with managing the Ambassador’s Special Self-Help fund (SSH), an annual development assistance fund designed to support small self-help activities at the community level. I also played the role of junior political/economic officer.

Administering the Ambassador’s development project fund exposed me to a different type of development work. The Special Self-Help fund assists local groups by providing financial aid to build schools, wells, dispensaries and other public works. The process was complicated from the start because of budget cuts at the Department of State. Upon my arrival, I was expected to solicit and review proposals, make site visits, oversee the final selection process, and do all the paperwork necessary to commit the funds, including drafting the grant agreements all in three months.

As many of us have learned while working at the local level, development initiatives are most sustainable when launched from within the community. I was lucky to team up with a Foreign Service National with nine years of institutional memory from working on SSH programs in Guinea-Bissau. I soon began to understand the philosophy behind the fund.

Considered to be a "development project fund" based on local initiative, the SSH project’s purpose is twofold: to have an immediate and maximum impact at the community level, and to advance U.S. objectives while increasing the U.S. government’s visibility and role in Guinea-Bissau’s development. I was pleasantly surprised that the Embassy was even involved in this type of activity. Although not an ideal way to disburse money from a sustainable development perspective, an understanding of the U.S. government’s objectives allowed me to be persistent and upbeat about my work.

Whether it was providing a rice-husking machine to a village to support production of its main cash crops, or building a well so as to provide potable water for a local health center, the communities were always grateful. This was evidenced through both my direct interaction with the local population during site visits, and my subsequent assistance to project supervisors in filling out the necessary U.S. government forms. True, this type of one-time, short-term project assistance may not be as sustainable as other forms; however the alternative may be no assistance at all.

My other major task of the summer was to seek out the major players working in development and put together an NGO directory. I recalled from my Peace Corps days that Guinea-Bissau’s NGO sector was small and little-known. Because local NGOs are often the most efficient means of delivering sustainable development projects at the community level, I felt a directory of this sort would be a useful resource for both local and international organizations. Using contacts established while I was in the Peace Corps, as well as those I made at the Embassy, I was able to track down more than sixty organizations. The directory was intended to encourage local and international collaboration and to avoid project duplication.

My summer experience confirmed my belief that community initiative and NGO partnership are essential for successful development. I learned that development projects have a way of taking on a life of their own. Whether pushing political, economic, or humanitarian agendas, it is easy to focus more on the details of managing a fund rather than the desired outcomes. In order have the most impact on local populations, however, organizations should avoid pursuing short-term agendas and focus instead on long-term goals.

Returning to Guinea-Bissau as a State Department intern allowed me to gain a broader understanding of development work. Whether or not one agrees with the source or management of "development project" funds, understanding a foreign government or international organization’s objectives is important. While waiting at the airport before I was to leave for the United States, a friend of mine asked if I would return to Guinea-Bissau. "Of course," I replied, knowing that I would, although not knowing when or in what capacity. After I said tearful good-byes and took in the sounds and smells of the country for one last time, my plane took off. Looking out of the window during takeoff I noticed a change. There were far more zinc-roofed houses than I recalled from before. In Guinea-Bissau, zinc is more expensive than thatch, and zinc roofs can be seen as symbols of prosperity. With the proliferation of NGOs, varied international support, and a greater emphasis on local initiative, positive change does seem to be taking place.

This story has been posted in the following forums: : Headlines; COS Guinea Bissau; Return to our COS - Guinea Bissau