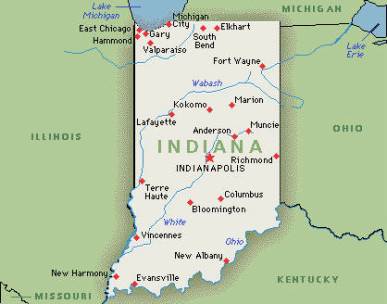 South Bend, Indiana - South Bend used to be a sophisticated place. With several universities, a symphony orchestra, and a nationally respected newspaper, it was probably one of the better places for liberals and conservatives alike to mingle and find a sense of place.

When my crowd was growing up there in the '50s and '60s, our political inclinations tended to align themselves with those of the parents who gave the best parties. With time we moved from the levity of horn-honking midnight forays down Jefferson Boulevard campaigning for Barry Goldwater to those dark days of the 1968 Democratic Convention in Chicago when we came home physically and morally bruised. As the war in Vietnam and prime time assassinations ruined more and more dinner hours, my crowd either morphed into pillars of South Bend society, disbursed or was lost to the counterculture from which not even age or a college degree could save us.

Now, from my South Bend diaspora, I wonder what we still have in common. Recent international dissent over the second war in Iraq appears to have dug an existential chasm between the United States and France, my country of adoption. My home country, the U.S.A., is promulgating values foreign to the American concept I revered in the 1960s. I fear that I may now be an alien in my own hometown.

I left South Bend in 1969 to join the Peace Corps to proudly represent America in the name of peace and education. I was imbued with notions of tolerance, understanding, generosity, universal brotherhood, free speech and, if we were really very lucky, the pursuit of happiness. I was sowing an all-American brand of democracy while learning respect for ethnic and cultural diversity.

When the United States unilaterally declared war on Iraq, I wondered if it was still legitimate for me to call myself American because I could no longer relate to the new front-page values. Now, I want to share my thoughts with you from that country formerly known as France -- before it was wiped off your atlases.

Don't get me wrong: I am not pro-Saddam and I am not anti- American. I just think that either we waited too long to get rid of him, or we jumped the gun.

Saddam Hussein's sanguinary record has been known for decades, though cynically denied when convenient for U.S. policy, such as after the tragic 1988 Halabja gassings. Over the past decade, the United Nations has become more focused under Kofi Annan, and that spattering of so-called "old" countries now known as Europe has emerged waving the flag of multilateralism. In this light, the decision to wage war on Iraq in 2003 without consensus in the United Nations and without having exhausted all diplomatic efforts, is, to the non-U.S. democratic world, well, un-American.

In the aftermath of Sept. 11, 2001, there was hardly a Frenchman or German alive who didn't claim to be American out of solidarity. I was proud to be an American.

Today, there is a request for French citizenship on my desk under the weight of great moral incertitude.

I live in a village near Normandy. My neighbors put up the American flag alongside the French and British flags on Nov. 11 and May 8. (Surely you remember those dates.) The kids dress in American- logo T-shirts, blue jeans and sports shoes. They all start studying English in junior high school and their street vernacular is full of Americanisms ("yes!", "OK," "c'est fun").

Unlike American children, however, they have also absorbed an extensive Arabic vocabulary. "Salaam allecum" (greetings), "inch' Allah" (God willing), "kawa" (coffee), and "toubib" (doctor) and are just as good as French.

At 10 percent of the French population, the Muslim community is highly visible. The younger generation now weighs heavily at the polls and does not remember France's war debts to the United States. The French government simply can no longer ignore this sizeable, volatile group of electors, who joined a majority sweepingly opposed to the war in Iraq.

When the United States waves its 59-year-old "IOU" in the face of the French Republic, let it not forget that France still holds a 227- year-old "service voucher" it can claim from the United States for securing the original victory for democracy.

The shameful (when not ridiculous) campaign launched against France is all the more devastating because the French do not hate the American people. They are just overwhelmingly opposed to the Bush administration's policies.

(And, judging from the impressive number of Americans seen recently in the hinterlands of the Cte d'Azur -- off season, no less -- the anti-France campaign has made room for a lot of happy American campers. Unless they're here requesting political asylum.)

I am distressed to see how badly the United States is managing its aprs-guerre and how many U.S. soldiers have died in a war that would have better been fought through diplomacy. Where are the signs of a master organizer? Where is the World Trade Center-style cleanup crew? The Muhammad Ali-type celebrity spokesmen to create an emotional link with the Iraqis? I am amazed because I would have thought that the reconstruction of Iraq should have been on the drawing boards since 1991.

Without rapid, efficient, massive relief, the Iraqi population will never cooperate fully with the United States. On the contrary, a hostile population, abetted by international terrorists and even Saddam himself, will threaten all peace efforts. Even those who claim to hate the United States expect our country to be exemplary in everything we do. Please let it not be a failure.

I am also alarmed about "collateral" issues like the risk of loss of civil rights in the United States and big industry lobbies that threaten the environment worldwide. And, of course, I am embarrassed that governments represented by Christians, Jews and Muslims internationally are making God the real loser.

I want to be proud to be American again, so I will vote in the next elections to try to re-establish values I live by. I trust you will help me feel a little less alien then.

In the end, there is still a burial plot reserved for me in South Bend, so I might yet come home. Unless, of course, you've re- baptized LaSalle Street.

Constance G. Konold is a graduate of St. Mary's Academy and holds a Master of Arts in Teaching from the University of Notre Dame. She is currently a communications consultant and life coach living near Paris, France. She may be contacted by e-mail at: