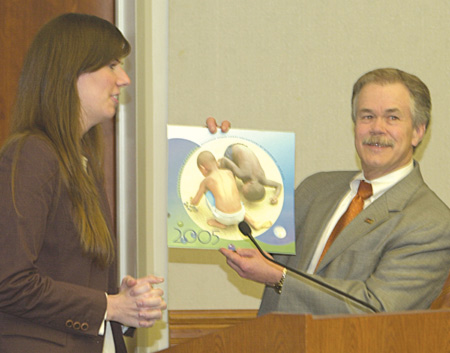 Lacy gave the proclamation in honor of the 44th anniversary of Peace Corps and its Stillwater volunteers who have traveled to several countries to help countless individuals.

“It was a great privilege to have Mayor Lacy pronounce the week and officially recognize the contributions of the volunteers from the city of Stillwater,” said Carissa Champlin, international studies graduate student and Peace Corps recruiter for Oklahoma State University.

Champlin, who has been recruiting since August 2003, said OSU is the number one Peace Corps volunteer-producing institution.

Billie Chambers, a Peace Corps volunteer in Ecuador from 1962 to 1964; Mike Kizer, a volunteer in Malaysia from 1971 to 1973; Brenda Dean, a volunteer in Thailand from 1995 to 1997; and Champlin were present to receive the proclamation.

Dean said she wanted to join the Peace Corps since she was in high school.

“I arrived in Thailand on my 30th birthday,” Dean said.

Dean served as an English teacher in a secondary school in Thailand and was involved in a community development project with school children and farmers.

Chambers coordinates activities for former Peace Corps volunteers in Oklahoma. Chambers also serves as the group leader and arranges volunteer activities all over the state.

Chambers said there will be a celebration on March 6 at the Gilcrease Museum in Tulsa from 3 p.m. to 6 p.m. as part of Peace Corps Week.

“We will have a panel of former Peace Corps volunteers who have served over the last few decades,” Chambers said.

In Stillwater, there will be an information table set up outside the Student Union Bookstore in the afternoons beginning Monday and running through March 6.

“It will be a great opportunity for students to get more information by talking to former volunteers, and I will also conduct class talks across campus,” Champlin said.

To join Peace Corps, one must be at least 18 years old and be a U. S. citizen. Currently, the number of volunteers is at its highest since 1974.

“We have about 7,750 volunteers serving nationwide on a 27-month project,” Champlin said.

Champlin encouraged everyone to attend the celebration on March 6 in Tulsa.

“Peace Corps is a wonderful opportunity for people of all ages, where you can learn diverse cultures from different countries,” Dean said.

For additional information, Champlin may be reached by phone, (405)744-3048, or by e-mail, pcorps@okstate.edu. The Peace Corps office is at 204 Wes Watkins Center.

This story has been posted in the following forums: : Headlines; Proclamations