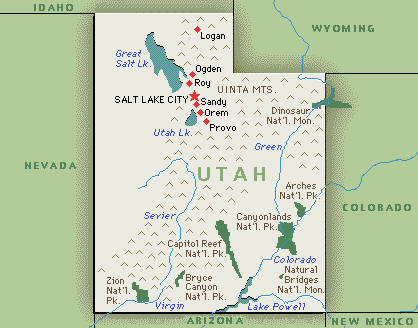 When Saundra Schimmelpfennig learned of the devastation wrought by the Dec. 26 tsunami, which left more than 160,000 dead across southeast Asia, her response was instinctual.

Get there and do something.

"I was glued to the computer for two days, and I kept thinking how I could get over there," the 35-year-old Utah State University alumna said on Thursday from her mother's home in Logan.

She had already been there once, serving in Thailand from 1997 to 1999 as a Peace Corps volunteer, training people to teach environmental education and translating documents into English at a national park.

It was that service that got her back into the country as part of the first wave of Crisis Corps volunteers dispatched to battered coastal villages in an effort to help the nation regain its footing.

Since 1996, the Crisis Corps program has responded to more than 300 natural disasters around the world.

Volunteers in the program are former members of the Peace Corps with at least one year of service.

Now, Schimmelpfennig will spend at least six months in the village of Khouburi in the Phung-Nga province, just 30 miles off the west coast of the Adaman Sea and about 40 miles north of Phuket, one of the cities hit hardest by the massive undersea earthquake that measured 9.0 on the Richter scale.

"I don't think I'm going to comprehend it until I'm there, but I'm expecting a lot of confusion," she said.

The only Utahian to make the trip, Schimmelpfennig left for Thailand on Friday as one of four volunteers charged with assisting the district staff with resource identification like prioritizing community needs related to housing and schools.

At least, that's what the job description reads on paper.

"I don't know if that's the reality I'm going to find. They want us on the ground running," Schimmelpfennig said.

Although she needed to be fluent in the language prior to her first stint, Schimmelpfennig has spent the last month brushing up on it and researching her village on the Internet.

She also had to obtain legal and medical clearance, including undergoing a round of shots for diseases like Japanese encephalitis, rabies, diphtheria, tetanus and typhoid.

That's the easy part, she said.

"It's a hard transition (into the culture) because you can't relax and be an American. You don't even realize you're doing offensive things," she said.

Last time, she ran into trouble after licking stamps before affixing them to envelopes.

"People considered that extremely rude because the stamps have the picture of the king, and you don't lick the king's face," Schimmelpfennig said.

Schimmelpfennig said making the adjustment from constant communication to spotty dispatches is also difficult, compounded by the 11-hour time difference.

One Christmas she called her family at 3 a.m., and when her fiance died while she was abroad, a Peace Corps executive had to track her down and break the news to her.

"It was very difficult because the distance was so great," she said.

In a country about twice the size of Wyoming and with a population of more than 64 million, the crippling effects of the tsunami resonate a long way -- and even while back home in Santa Barbara, Calif., Schimmelpfennig wasn't cut off from it.

The huge waves that tore into Phuket took the home of one of Schimmelpfennig's friends, a teacher.

"She only has one wall left standing," Schimmelpfennig said.

Even with the billions of dollars in aid that have poured into Thailand and other nations ravaged by the waves, Schimmelpfennig said there's a lifetime of work still to be done.

This story has been posted in the following forums: : Headlines; COS - Thailand; Tsunami; Crisis Corps