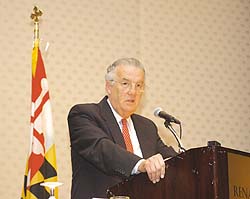 Senator Paul S. Sarbanes (D-MD) issued the following statement today on his decision not to seek reelection in 2006:

"Good afternoon, and thank you for joining me today.

As many of you know, I first ran for elected public office in 1966 for the Maryland House of Delegates, where I served a four-year term.

In 1970 I ran for the U.S. House of Representatives and was elected to the first of three terms.

In 1976 I sought election to the United States Senate, where I am currently serving my fifth term.

I am here today to announce my plan for the election of 2006. I have reached the decision that I shall not be a candidate for re-election.

I am deeply grateful to the people of Maryland, who have honored me with the privilege of representing them in elected public office for nearly forty years. Throughout my years in public service I have always sought to provide the people of Maryland with dedicated, independent representation, based upon intelligence and integrity: representation that gives people confidence that elected officials are there to serve the public interest.

I have been guided by a vision of a decent and just America, based on a strong sense of community, and offering fairness and opportunity to all its citizens. Those values and that vision are as clear and steady today as they were when I first entered public service, and they will continue to guide my work in the years ahead.

I am also deeply grateful to all the many individuals and the institutions that first helped me to formulate these principles and who over the years have worked with me and supported my efforts to advance them.

Foremost, my parents, who came to this country as immigrants from Greece. From them I first learned about the meaning of a democratic society, and the potential it offers to move up the ladder of opportunity on the basis of ability, hard work and conviction.

The Salisbury community, which gave my parents an opportunity to build a new life in their adopted country, and where I grew up and went to school. My teachers and my coaches always encouraged me to do my best, to care about the community I lived in and to think about the larger world.

The great city of Baltimore, where my family and I have lived and worked since 1960, where I was first elected to public office and for whose people we have a deep and abiding affection.

My nearly thirty-six years in the Congress have been challenging and fascinating and it is a source of tremendous satisfaction to travel the State and see so many improvements in every region that I have played a role in bringing about.

It would never have been possible for me to meet all the responsibilities of my office without my staff that has served so well here in Baltimore, in Washington and in field offices around the State. The people who work with me understand and love our State; they work at the highest levels of competence and frequently under great pressure; and I would add that they never hesitate to stand up for what they believe to be right. They have been a source of encouragement, inspiration, and hope for the future. We have worked as a team, dedicated to serving our constituents, our State, and our Nation and this has been one of the great rewards of serving in public office.

I am grateful beyond measure to my wife, Christine, and to my children, their spouses and children. It has been my great good fortune always to be able to turn to my family for counsel and support when difficult decisions were to be made. This is true of the decision I have announced today.

With twenty-two months of my term still before us, my staff and I will work hard to continue to serve all Marylanders to the very best of our abilities and to oppose the tragic and misguided policies of this administration, especially the current radical attempt to undermine the Social Security system. You can be certain I will continue to do my very best to represent this State and all its people."