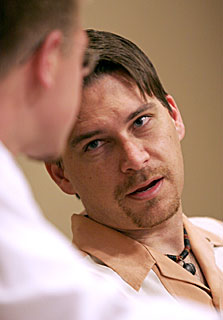 First-year law student Kolby Granville is expected to be confirmed as the new Arizona Board of Regents student regent in late April.

Shaina Levee / THE STATE PRESS
First-year law student Kolby Granville is expected to be confirmed as the new Arizona Board of Regents student regent in late April.


In the 10 years since Kolby Granville started at ASU he's seen almost every side of student life, and he's about to add one more.

The Arizona Board of Regents is expected to confirm Granville as the new student regent from ASU at its meeting April 28-29. Student regents serve a two-year term on the 12-member board and represent more than 115,000 students statewide. The appointment rotates between NAU, UA and ASU each year.

Granville, a first-year law student who hails from Tempe, said he's relieved to finally become a part of the universities' decision-making process.

Administrators, though well intentioned, don't always know what's best for students because they're not coming from a student perspective, he said.

The same applies to past student regents, he added.

"I think it's difficult to represent students when you haven't been the prototypic student," Granville said.

Granville has a bachelor's and master's degree in education and has been attending ASU off and on for the last 10 years.

In that time, he founded SDTV Channel 2, worked as a disc jockey at the campus radio station 1260 AM The Blaze, was an NCAA All-American in archery, oversaw the Farce Side and Barren Mind comedy troupes and served as activities vice president for the Associated Students of ASU.

Granville has also been involved in the surrounding community as a member of the East Valley chapter of Habitat for Humanity, served on the Tempe Commission for the Arts, served in the Peace Corps in Mozambique and worked as a teacher and curriculum developer in China.

"His background is very impressive," said Gov. Janet Napolitano, who appointed Granville to the position, in a press release. "Kolby has already established a strong presence at ASU and that will be a great benefit to the Board of Regents."

Even with all these accomplishments, Granville said he is most himself when he is rock climbing. As he is "absolutely terrified" of heights, he doesn't have time to think about anything else.

"The problem is absolutely in front of [me], and the answer is absolutely clear," he said. "[I] have to make it to the next rock."

Some of Granville's main goals as student regent include:

* Focusing on the university redesign to keep an open dialogue between students and administrators.

* Engaging administrators to provide clear reasons for tuition increases so students can see where their money is going.

"You [administrators] should have to argue for every increase," he said.

* Expose regents to the student experience.

"They would know more in one night [in the dorms] than in seven years of memos," Granville said. "The hope is that the first-hand knowledge will transfer into votes."

* Get administrators to include student input earlier in the decision-making process.

Saif Al-Alawi, president of the Associated Students at ASU West, said Granville is committed to meeting students and isn't afraid to voice his opinion.

"He wants to experience everything first hand," Al-Alawi said. "He's gone out of his way to make sure he receives the newspapers from every campus so he can be a better student regent."

Reach the reporter at elias.arnold@asu.edu.

This story has been posted in the following forums: : Headlines; COS - Mozambique; Law; University Administration