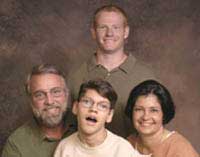 Tom Weisner has spent a lifetime working to improve quality of life for others...whether as a Peace Corps volunteer in a distant land or as an innovative administrator right here in the City of Aurora.

Tom Weisner has been a creative leader, helping to bring positive change to our city...from community-wide efforts to reduce crime, to revitalizing our older neighborhoods, to a new Customer Call Center for better service to you. Weisner cares about people.

Tom Weisner is a Proven Leader who produces Real Results.

Beyond his involvement with citizens and neighborhood residents in his daily work, Tom has contributed impressively to our community on a volunteer level, working to create educational, recreational and career opportunities for our young people, stronger families, and employment for all. Tom has served as an officer or board member of the following organizations in recent years:

* Study Circles—community dialogue to increase understanding and cooperation among all citizens.

Tom and his wife, Marilyn Hogan Weisner, have made Aurora their home for more than 30 years, residing on both the east and west sides of town. Marilyn is an owner/partner in the Rainbow Center, a pediatric therapy center in Aurora that provides speech, occupational and physical therapy to children with disabilities. Marilyn taught in the East Aurora Schools (Allen) 1975-1980 and served as an elected Aurora Township Trustee from 1997—2000. Son, Thaddeus, 19, was born with Cerebral Palsy, resides at home and attends Hope D. Wall School. Foster son, Anthony Scotti, 26, joined the Weisner family at age 14, graduated from Aurora Central Catholic High School, and received his B.S. degree from Western Illinois University.

Prior to Tom’s employment with the City of Aurora, Tom and Marilyn spent 5 years working to improve the lives of third-world natives on the Island of Guadalcanal in the Solomon Islands, from 1980–1985. Living in Guadalcanal’s remote interior rainforests, Tom and his wife worked closely with the natives to improve the health, sanitation, and economy of the region, providing medical services and ultimately training several young adults to provide health services to their own, isolated villages. They also assisted business development, including a cooperative store.

This story has been posted in the following forums: : Headlines; COS - Solomon Islands; City Government