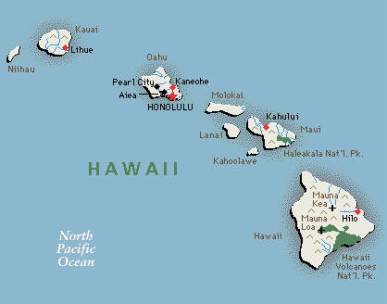 Jet-black lava dominates the landscape here, along the Kona coast. Stretching about 70 miles, this western coast of Big Island has beach homes and resorts, coffee plantations and the Hualalai volcano which reaches 8,000 feet into the clouds.

I hiked there, in a 70-acre cloud forest created by retired horticulture professor Norm Bezona; he’s a former Peace Corps volunteer and he’s committed to protecting beautiful tropical flowers and birds. The trails aren’t paved so walking sticks are provided, as are light back packs with rain jackets. Even though Kona is the dry side of Big Island, in the clouds you can get wet.

In this cloud forest I saw an ieie tree whose fronds the natives used in the 1770s to weave as armor for protection from the muskets of Capt. James Cook, Lt. William Bligh and others on the HMS Resolution. Cook actually landed in what is today Kauai and named the archipelago in honor of the Earl of Sandwich.

I also discovered an albezia, considered one of the world’s the fastest-growing trees; you stumble on its big roots growing on top of the lava rocks on this volcano mountainside.

Am I a botanist capable of recognizing such trees? Hardly, but this cloud forest can be toured with a guide.

Coffee “cherries” are red, which surprised me, producing one or two flat seeds or beans. I saw my first ones in the cloud forest but you can take a tasting tour of the coffee farms to learn even more. Harvest (all by hand) happens from September to January, with the 10-day Kona Coffee Cultural Festival in November.

In 1813 King Kamehameha’s Spanish interpreter and physician gave him an ornamental coffee plant; 15 years later a missionary transplanted a cutting from an orchard on Oahu to Kona and bingo! This climate led the way to family coffee farming.

Climate means a lot in Hawaii, all day, all year and through the centuries.

Downtown Kailu-Kona is pleasant to roam, with shops more interesting than the normal tourist stops. Wear your bathing suit because there’s a nice beach right in town so you can cool off and relax in the water.

You can also visit Hulihee Palace, built in 1838 by the brother of Queen Kaahumanu and one of only three royal residences in the U.S. Across the street is Mokuaikau Church, considered the oldest Christian church in Hawaii. The exterior is lava rock and inside features ohia, called Hawaiian mahogany, and koa wood, plus a replica of the brig Thaddeus which brought the first missionaries here from Boston.

Check out the King Kamehameha Kona Beach Hotel even just for a stroll through the lobby to see portraits of the Hawaiian royalty, the artists’ gallery run by Kulana Huli Honua, a statewide cultural organization and the cultural and historical displays and exhibits.

Check it all out: Big Island, Maui, Kauai, Oahu and the smaller islands still waiting for my return some year.

This story has been posted in the following forums: : Headlines; Environment