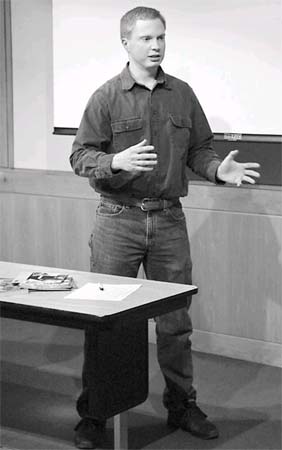 Matthew Smith served as a Peace Corps volunteer for two years in a small rural area in Ecuador before returning to OSU to work as the campus representative for the organization. He showed a video of his experiences Monday night at 108 Wes Watkins Center.

Caption: Matthew Smith gives a presentation on what it was like to be a Peace Corps volunteer in the Andes Mountains. Many who volunteer for the Peace Corps are potentially subjected to dangerous conditions. Photo: Rob Blankenship/O’Collegian

Fog rose into the majestic Andes as cattle grazed on the natural grass. In the small rural town, a woman planted potatoes in a traditional Ecuadorian outfit while a younger generation wearing modern shorts and a T-shirt helped her dig. Locals chatted in a market as vendors ran fruit and soup carts. Fish swam around in a canal, darting to the surface when their feed of rice was thrown into the water.

They are sights as foreign to Oklahoma as kangaroos or komodo dragons. But this is the life Matthew Smith lived for two years. Smith served as a Peace Corps volunteer for two years in a small rural area in Ecuador before returning to OSU to work as the campus representative for the organization. He showed a video of his experiences Monday night at 108 Wes Watkins Center.

Six people attended the showing, which was followed by a question and answer session. Peace Corps has been around for more than 42 years and has provided volunteers for 138 countries. Peace Corps sends volunteers to areas after someone in the area has requested them.

The organization is gearing up for the end of the semester with an application writing workshop Monday in 108 Wes Watkins. There will also be a coffee talk session on April 18 at the Daily Grind and a send-off party for volunteers on April 25.

Smith says he was drawn to Peace Corps through already existing desires.

“I knew for a long time before I joined, before I even heard about it, I knew that a) I wanted to go to another country and really be a part of the culture instead of just being a tourist. B), I wanted to live in a community and create friendships and kind of learn the local knowledge that’s there and try to help out in any way that I could. And C), I definitely wanted to learn another language.

“I was kind of poor, so it’s like ‘wow, the government is, you know, going to pay. So I was looking for an option that would allow me to do all of that.”

Sophomore Kat Suber says she is looking into Peace Corps for the future.

“Africa is the place in mind,” she said.

Suber says she is preparing by taking French classes next semester.

Smith says although there is a rather stringent application process, Peace Corps looks for a variety of different applicants and skill levels.

“There’s the standard party line, I guess, of, you know, motivated, dedicated people who are willing to serve, willing to help and, you know, have skills that they’re willing to share. But we have so many programs that ask for so many different types of qualifications that there’s no one Peace Corps Volunteer,” Smith said.

It’s not only in agriculture or sciences that Peace Corps provides, Smith said.

“A good example would be, like, drama. Nobody would think ‘All right, this is going to help in the Peace Corps,’ but a lot of things like teaching HIV and AIDS awareness is done through plays.”

Those looking for more information can visit the Peace Corps office at 204 Wes Watkins Center.

This story has been posted in the following forums: : Headlines; COS - Ecuador; Recruitment; The Third Goal