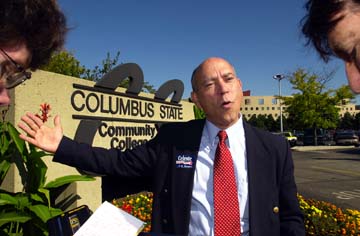 Ted S. Celeste, 60, is a Columbus resident. He earned a bachelor's degree in psychology from the College of Wooster and is a broker/owner of Celeste & Associates Real Estate. He served with the U.S. Peace Corps as a volunteer and teacher and worked for the Ohio Department of Public Welfare and the National Housing Corp.

Four Democrats will appear on the May 2 ballot, seeking the party's nomination to run against Geoffrey C. Smith, Republican incumbent in the 24th Ohio House District, in the November general election.

Ted S. Celeste, 60, is a Columbus resident. He earned a bachelor's degree in psychology from the College of Wooster and is a broker/owner of Celeste & Associates Real Estate. He served with the U.S. Peace Corps as a volunteer and teacher and worked for the Ohio Department of Public Welfare and the National Housing Corp.

Celeste said he decided to run "because it is time for thoughtful and reasoned change in the state.

"If Ohio is going to be competitive again in a global market, and if our kids are going to have a bright future, they need good jobs," he said. "Our children must start with a healthy and supportive preschool environment. They need a quality primary and secondary education and affordable and accessible colleges. We must develop retraining programs for those who have recently lost jobs in the businesses of yesterday so they are prepared for the companies of today."

The candidates responded to the following questions from ThisWeek:

South Dakota has passed a ban on abortions, in anticipation of victory should the law be challenged in a more conservative U.S. Supreme Court. Would you support similar abortion-ban legislation in Ohio?

Celeste: I support the law of the land as determined by Roe v. Wade. I do not believe that any additional legislation is necessary in Ohio, and that we need to address the more pressing issues of education funding, job creation and provision of adequate and accessible health care.

School funding remains an issue in Ohio. In your opinion, what is the best way to fund Ohio's public schools?

Celeste: Ohio must meet its constitutional responsibility to provide a quality education to all of its eligible children. At this point, the Ohio Supreme Court has determined that we have not met that responsibility. The present school funding formula as it is constructed is not meeting our financing needs. We cannot continue to over-rely on the property tax as the source for educational funds. While local control is an important element to school management, using levies at the ballot box is not the best management tool. And property taxes put an undue burden on residents on fixed incomes. Any new funding formula needs to be equitable and progressive.

Anti-tax groups have suggested that Ohio's tax structure is causing an exodus of businesses and residents. Does the state structure need to be changed?

Celeste: In 1990, the state was fifth in the nation in new job creation. Now we are next to last. This erosion has a number of causes; tax structure is only one. More importantly, we have not provided adequate support to our education system ... Without high-paying jobs in the businesses of the 21st century, our young people are headed to other states for better opportunities. Many older businesses have moved or closed because of competition around the globe -- not Ohio's tax structure. In order to turn around Ohio, we need to address all of the issues -- education, new job creation, retraining for the new jobs, accessible and affordable colleges and universities, manageable health care costs for small businesses and providing meaningful tax reform that offers incentives for new business creation and development.

This story has been posted in the following forums: : Headlines; COS - Fiji; Politics; Election2006 - Celeste