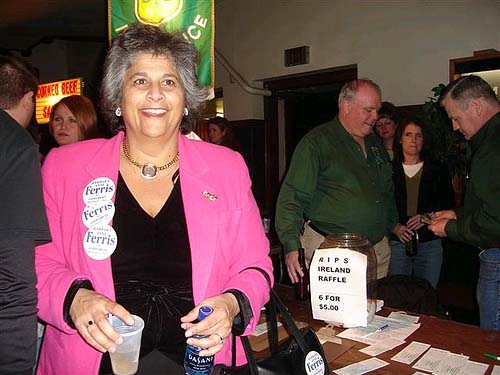 "Ferris is intelligent, experienced in national and international affairs through her work with the United Nations, the Peace Corps and the International Women's Democracy Center, and puts forth what we believe to be an attainable plan of using the district's remaining resources to help it return to economic health."

It is extremely unusual for a newspaper to withdraw its endorsement from an incum bent it has supported for years - the more so when that officeholder is a con gressman with an interna tional reputation, and the race is a primary election that he almost certainly will win.

Nonetheless, that is what The Plain Dealer does today. In the Democratic contest between five-term Rep. Dennis J. Kucinich and his challenger, nonprofit executive Barbara Anne Ferris, this page endorses Ferris as the Democrat more in tune with the community, its needs and its future.

Why? Because Ferris is intelligent, experienced in national and international affairs through her work with the United Nations, the Peace Corps and the International Women's Democracy Center, and puts forth what we believe to be an attainable plan of using the district's remaining resources to help it return to economic health.

Ferris, 52, lacks elective experience. That cannot be denied. In many ways she is a political work in progress - optimistic almost to a fault, as though she believes she herself must provide all of the energy necessary to carry her to what would be a stunning upset victory.

But it is evident that her abilities and potential for success mark her as a serious person with a serious campaign geared to the needs of the district she would serve.

And that, sadly, is more than we can say for the approach Kucinich, 59, has taken in recent years.

Rather than focusing on the real and immediate needs of this district, which encompasses the West Side of Cleveland and Cuyahoga County's western suburbs, Kucinich has been on a quixotic journey of increasingly grandiose proportions. He spent much of 2004 on a one-man campaign for president of the United States, having cobbled together a creaky, left-slanted platform upon which his party would not set foot, but which he would not abandon. And though he says he has no plans to resume that quest next year, he declines to rule it out.

Now, America is a wonderful country, where anyone can aspire to the presidency. But, left here in the dust of Kucinich's globe-trotting quest, his constituents can only wonder: What might have been accomplished for the 10th District had those energies been channeled into pursuing its interests, rather than those of its congressman?

Another factor in this decision has been Kucinich's regression to the belligerent, us-against-them mindset that made him the one-term "boy mayor" who led Cleveland into default in the 1970s. His preference for confrontation over cooperation did Cleveland no good then; it does the region no good now.

No better example stands out than the Friday morning last May when the city was struck by an economic thunderbolt: Based on its tentative cost calculations, the Pentagon had decided to strip Cleveland of more than 1,000 good jobs by closing its Defense Finance and Accounting Service office here. Stunned city leaders assem bled to tell the com munity the battle was not yet lost, that the commission must have made a mistake. "We intend to stand up and turn it around," said Mayor Jane Camp bell, trying to set a reasoned tone.

Kucinich was not about to follow Campbell's lead. For him, the Pentagon recommendation was a direct, intentional attack from the president of the United States.

"This administration has basically told Northern Ohio to go to hell," he screamed at the cameras. Behind him, the assembled leaders blanched. It was no time for bellicosity.

As the diligent work of another congressman's staff later established, there was no White House vendetta. The Pentagon simply had based its conclusion on bad numbers. When that staff work was presented to the Base Realignment and Closure committee, the city not only retained the coveted jobs; it gained hundreds more.

Had Kucinich's attitude set the course, half the federal office building might be empty today.

In fairness, Kucinich has done some things we have lauded, among them his consistent opposition to the Iraq war since before it began. As well, he has changed his position on flag burning: He now opposes a constitutional amendment that would ban this form of political expression. And his office's record for providing constituents with needed services is said to be excellent.

But providing good services is the basic expectation of a federal representative. Congress should be measured by accomplishments beyond the hiring of competent staff.

And there Kucinich comes up wanting. His legislative initiatives, whether for universal health care or his long-talked-of federal Department of Peace, are most informed by his place well to the left of all Ohio's other representatives. His proposals go nowhere.

And nowhere is about where the district has gone since he has been its representative.

Cleveland deserves more from its members of Congress.

Ferris, his primary opponent, appreciates the necessity of cooperation and district focus. A member of a family known since World War II for its steakhouse restaurants, she grew up living and working in the district. She holds an advanced degree in finance and budgeting that would serve her well in the House. It would take little time for her to be at full speed.

Asked why Democrats should turn away from the incumbent to support her, Ferris responded that Greater Cleveland no longer can afford the luxury of a congressman whose focus is elsewhere, who has so little to show for his time in office. We cannot say that she is wrong. Thus, we endorse her candidacy.

This story has been posted in the following forums: : Headlines; COS - Morocco; Election2006 - Ferris; Politics

Barbara Ferris does not speak for change. Dennis has ethics and has core beliefs.

I can't say that about Ms. Ferris.