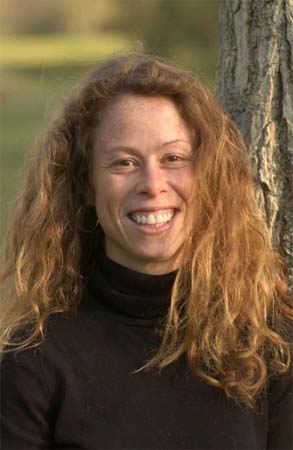 Ms. Bellincampi, 36, enjoys a stature that belies her height and age. She has dedicated the last 15 years of her life to environmental education - first with the Peace Corps in West Africa, followed by four years teaching on an oyster schooner in Delaware Bay, and the last seven years on the Vineyard with The Trustees of Reservations.

Suzan Bellincampi's favorite animals are mollusks, and her favorite habitats are tidal ponds and marshes.

She grows animated when talking about the wetlands, her smile wide, eyes sparkling. There is something about the brackish water flowing in and out with the tide that strikes a chord with her.

"I don't know what it is," Ms. Bellincampi said this week. "I guess it's change, but with consistency."

Those two words capture the spirit for this young woman who takes over as director of the Felix Neck Wildlife Sanctuary in Edgartown next month. The Massachusetts Audubon Society announced Ms. Bellincampi's appointment at the sanctuary - which was formed in 1969 with a founding mission of natural history education for children - on Tuesday of this week. She comes to the job from The Trustees of Reservations, where she spent the past seven years running educational programs. And she is only the second director in its history, succeeding Island naturalist Augustus (Gus) Ben David 2nd, who retired in December after running Felix Neck from its very first days.

"No one's replacing Gus; you can't replace Gus," Ms. Bellincampi said. "I only hope to honor his legacy."

She admitted it was daunting to follow in the footsteps of a conservation giant.

"Gus has big shoes, and I have little feet," said Ms. Bellincampi, who stands just south of five feet and weighs barely north of 100 pounds.

But among her colleagues, Ms. Bellincampi, 36, enjoys a stature that belies her height and age. She has dedicated the last 15 years of her life to environmental education - first with the Peace Corps in West Africa, followed by four years teaching on an oyster schooner in Delaware Bay, and the last seven years on the Vineyard with The Trustees of Reservations.

She has also written the All Outdoors column in the Vineyard Gazette for the past three years - something she plans to continue.

Ms. Bellincampi describes the educational work as a vital part of the larger conservation movement. In environmental circles it is called interpretation, which she explains as making connections between people and resources. It is translating the language of the natural world in a way that gets people not only to understand, but to care.

"Most people don't realize what's around them all the time. Our job is to remind them, to show them, to get them to appreciate," Ms. Bellincampi said. She said the most effective conservation initiatives are community-based.

"Conservation is local. And for people to believe it, they need to feel it in their hearts," Ms. Bellincampi said. "You really need to nurture in the community the people that you want to lead the conservation movement tomorrow."

It is in this way that Mr. Ben David has made such a lasting impact, sharing his love for nature with the thousands of children who have passed through Felix Neck over the last three decades - in either the Fern and Feather Day Camp during the summer, the school programs during the year, or the annual festivals in the spring and fall. Ms. Bellincampi said some of her fellow co-workers at the Trustees attended Mr. Ben David's programs as children.

"These experiences are staying with people," she said. "Felix Neck is a household name. It is one of the most well-loved properties on the Island, and a part of so many people's lives."

Trustees regional director Chris Kennedy, who brought Ms. Bellincampi to the Island when he hired her seven years ago, said she has a similar ability to connect with and engage people of any age and experience.

"She has an amazing gift of not talking over or under an audience - whether they are kindergartners or a group of Trustee members," Mr. Kennedy said. "Suzan has a wonderful, warm, inclusive personality. She has a very down-to-earth style that people connect with."

Ms. Bellincampi said it will be hard to leave the Trustees, but that she could not turn down the once-in-a-lifetime opportunity offered by Felix Neck.

"The position only opens up once every 36 years," Ms. Bellincampi said. "And it's an opportunity to make a difference in the place I love. I've found my place - and it's here."

She grew up in suburban New Jersey, and never went hiking or camping until she left for college. Ms. Bellincampi said her own nature-less childhood may be why she is now so passionate about teaching others about the environment.

"I didn't know bupkiss about nature," she said, "But that's because growing up, I didn't have a place like Felix Neck."

Made up of several different parcels totaling roughly 350 acres, Felix Neck is one of the oldest and largest conservation properties on the Vineyard. It includes diverse habitats of woodlands, meadows and marshes, and is home to more than 100 species, including ospreys, box turtles and barn owls.

It began with the donation of more than 200 acres by George Moffett in 1969, and over the decades other pieces have been assembled. The last 25 acres were added by a joint purchase involving the Martha's Vineyard Land Bank in 2003, and now the entire peninsula is protected from Edgartown-Vineyard Haven Road out to Major's Cove on Sengekontacket Pond.

As sanctuary director, Ms. Bellincampi will be responsible for the stewardship of the land, as well as the educational programs, outreach and fundraising. She said one of her goals is to build stronger partnerships with other conservation groups on the Island, and explore ways to include Mass Audubon in collaborative work elsewhere on the Vineyard.

She said that any changes at Felix Neck will happen slowly, and will need to be a group effort among Felix Neck staff, volunteers, members and the general public.

"I would love to hear from people, hear their ideas. What do they love that never should change?" Ms. Bellincampi said this week.

Mass Audubon will host a series of events at Felix Neck this summer to reintroduce Ms. Bellincampi to the Vineyard community. There will be a meet-the-director picnic June 25, as well as two walks in July and August. Her official start date is June 5, though she has already begun the transition.

Mr. Ben David this week shared praise for Ms. Bellincampi, and said his biggest concern about Felix Neck going forward was a lack of funding. Both he and Ms. Bellincampi said some of the buildings desperately need rehabilitation.

He also noted that he will be only a half-mile down the road, at his World of Reptiles and Birds, and will teach the snakes and turtles program at Felix Neck one day a week beginning in late June.

"Suzan is a wonderful writer, and she calls me when she has a question - which shows she is not afraid to ask for advice or help," Mr. Ben David said. "She's energetic, and she's someone here who knows the Vineyard well."

Ms. Bellincampi said she was still unsure which part of the job she was most excited about, but that she looked forward to spending each day at one of the most beautiful places on the Vineyard, with people who share the same passions.

She said that one day she hopes to be someone whom people look to for information about the natural world, and that the Felix Neck job will allow her not only to learn more about those things but also to share them with others. "I want to know when the shadbush is going to bloom, and where the best clamming spots are in the pond," Ms. Bellincampi said. "I want to be a salty old woman."

But she gracefully deflected attention away from herself, and back onto Felix Neck.

Originally published in The Vineyard Gazette
edition of Friday, May 19, 2006

This story has been posted in the following forums: : Headlines; COS - Niger; Wildlife