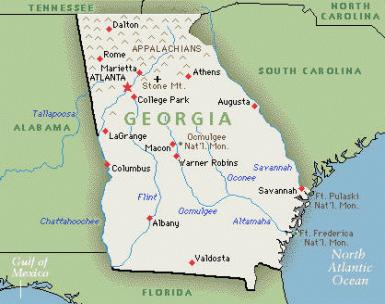 Some of the most recognizable names among Peace Corps veterans with Georgia connections include former Atlanta City Council President Cathy Woolard, who served in Micronesia; the Rev. Gerald Durley, a local activist and preacher who was in Nigeria; former President Jimmy Carter's grandson, Jason, who was in South Africa; and Lillian Carter, the president's late mother, who worked in India and has a biennial award recognizing older Peace Corps volunteers named in her honor.

By S.A. REIS
The Atlanta Journal-Constitution
Published on: 08/04/08

Nearing retirement, Carole Kallansrude began thinking a few years ago about what to do next. Now, she could be heading for the South Pacific.

But not as a tourist. Kallansrude could end up there as a Peace Corps volunteer teaching English as a second language.

The 66-year-old DeKalb County resident is nervously awaiting word on an assignment as her Aug. 8 retirement from the Southern Newspaper Publishers Association looms.

"I know it is going to be challenge," said Kallansrude. "But I think it's right for me at this time."

Kallansrude is part of a surge in Peace Corps recruits from Georgia, where applications are up 49 percent this year over last —- more than three times the national increase, the organization's Atlanta regional office says. Georgia tied South Carolina, but fell behind Mississippi and Alabama, respectively.

Puerto Rico showed the highest growth, at 100 percent. At the other end of the spectrum are the Virgin Islands, which remained unchanged.

Overall, applications in the Southeast, which includes Puerto Rico and the Virgin Islands, are up 34 percent. That represents the highest percentage increase for the region in at least five years, officials said.

Peace Corps officials attribute the jump to higher interest in social responsibility and making a difference in the world, especially among young people. The tight job market and efforts to recruit volunteers 50 and over, the organization said, also play a role.

But they believe globalization, immigration, travel by the 50-plus crowd, study abroad-academic opportunities, international affairs degrees and the experiences of returned Peace Corps volunteers have helped to encourage more in Georgia and the rest of the region to offer their time and talents.

"There has been this attitudinal change that serving overseas and getting involved in poverty alleviation and working to help others help themselves has motivated individuals to . . . do something as an individual to make a difference. Applying for Peace Corps is one of those things."

Founded in 1961, the Peace Corps is open to U.S. citizens age 18 or older. It touts its service as a chance to serve the nation by spreading both better living skills and goodwill in 74 countries.

More than 190,000 Americans have worked in 27-month assignments ranging from counseling and teaching chemistry to business development and HIV/AIDS treatment and education.

Some of the most recognizable names among Peace Corps veterans with Georgia connections include former Atlanta City Council President Cathy Woolard, who served in Micronesia; the Rev. Gerald Durley, a local activist and preacher who was in Nigeria; former President Jimmy Carter's grandson, Jason, who was in South Africa; and Lillian Carter, the president's late mother, who worked in India and has a biennial award recognizing older Peace Corps volunteers named in her honor.

This year's new recruits are likely to push the number of active Peace Corps signees from Georgia to over 200. Currently, 157 volunteers ages 23 to 61 are working in 67 countries.

They are among 8,000 nationwide fulfilling the commitment in exchange for educational, career and health benefits. They also get a nominal living stipend, life-changing work and memories that last a lifetime.

University of Georgia graduate Sabrina Fernandez, 24, is a community health educator helping to improve home-based care for the chronically ill in Malawi, in southeast Africa.

She's found her experience enriching but urges volunteers to be flexible and to pack a lot of patience. Assignments don't always work out as planned, she said. "If you come with a positive attitude and whatever comes at you take it and run with it, you'll find projects are more fulfilling that way," said Fernandez, who grew up in Snellville.

Kallansrude, a mother of one and grandmother of three, has traveled to China and Thailand. But she's counting on her Peace Corps assignment for a deeper experience. "I hope that it would enrich my life and that I would be able to contribute something to other people," said Kallansrude, who lives in the Northlake area. "I just think it's going to be very rewarding."

Vincent Willliams, 24, who studied business at Morehouse College, is headed to Ghana to advise small businesses.

The University of West Georgia graduate student was drawn to the idea at a job fair last August at the Cobb Galleria. It helped that his older brother, Hugh Williams Jr., was a Peace Corps volunteer in Sierra Leone in the 1970s and is now there working as a foreign service officer for the State Department in Washington D.C.

"When I first saw the presentation, I knew I wanted to be part of it," said Williams of Smyrna. "It fit right along with my career aspirations and goals."

Richard Walker, also 24, looks to the Peace Corps to help others and himself. Walker has been nominated to the African region. His community development assignment will include youth HIV/AIDS education.

"There are areas of my life where I see I need to mature. With the Peace Corps, I can mature a lot and also become aware of different cultures," said Walker, a UGA graduate studying conflict resolution at Kennesaw State. "I look forward to that."

Teaching English in Kazakhstan in Central Asia and Europe will be a welcome break and opportunity for practical experience for Addisu Seyoum, 23, of Marietta. The University of Southern California grad said he isn't yet ready to begin medical school at Cornell University.

"I thought I'd get in some traveling and volunteer work," he said, "which is far more fulfilling to me."