Kingston Trio to Play at Peace Corps Fest in Colorado 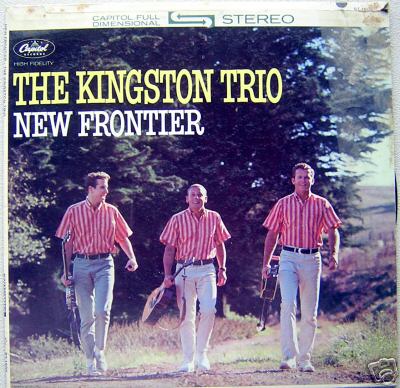 “Back in the ’60s when Robert Kennedy came up with the idea of the Peace Corps, John Stewart (former member of the Kingston Trio) was friends with Bobby Kennedy and wrote quite a bit of music that had to do with the new frontier,” said George Grove, banjo player and vocalist for The Kingston Trio. The Kingston Trio came out with an album called New Frontier in 1967. “The songs and the friendship of the Kennedys and the time—that was the involvement the Kingston Trio had."

Kingston Trio to Play at Peace Corps Fest in Colorado

Rock ’n’ roll, which set the standard for loud and bombastic music, has given generations of head-banging and hip-shaking youth fuel to be rebellious and angstful. Often that angst has been little more than blowing off hormone-driven steam, but there have been a few shining moments where youthful rebellion melded with positive societal change—think Woodstock or John Lennon.

But while rock only occasionally forays into cultural revolution, its two more mellow cousins, folk and bluegrass, have been associated with social change and deep lyrical substance for generations. Many protests have been accompanied by sounds of a guitar and harmonica drifting through the air in somber and melancholy unison.

The tradition of blending folksy-acoustic music with movements for change will be carried on at the Concert for Peace on Aug. 24, featuring the pre-Dylan legendary folk group, The Kingston Trio, and Cadillac Sky, a critically-acclaimed bluegrass band looking to break further into the national music scene with the release of its sophomore album on Aug. 19.

The Concert for Peace is part of Peace Corps & Friends: A Celebration, in which Peace Corps volunteers and members from around the globe will gather in Fort Collins for the weekend of Aug. 22-24.

To Go
Cadillac Sky and the Kingston Trio will play the Concert for Peace at 3 p.m. on Sunday, Aug. 24 at the Old Fort Collins Heritage Park at Northside Aztlan Community Center, 112 Willow St. Admission is $25. You can buy tickets at http://beetstreet.org/Peace-Corps-Reunion.


Cadillac Sky
Cadillac Sky's front man Bryan Simpson told Fort Collins Now that when he and the band signed on to do the Concert for Peace, they didn't really know what the event was about. Simpson chuckled, saying “regrettably” they hadn't petitioned to play the event. Nevertheless, when they found out what the event was all about, band members felt honored to be part of the gathering.

“Any time that we can be a part of something that's bigger than us, we're willing to go out of our way more and take less pay,” he said. “Whatever it is. If we're going to travel and leave our families behind for a good portion of the year, it’s got to be about more than just the music. To me, it's a part of being a part of this world in some ways. It sounds like that show is going to be toward that—enriching people's lives in some ways. We know it’s a very honorable thing to be a part of.”

Cadillac Sky’s debut album, Blind Man Walking, burst onto the bluegrass scene in January 2007 to critical accolades. With that album, the band forged a reputation of being experts in dissecting and interpreting the roots of bluegrass music while expanding the genre to new frontiers. Being labeled as a revolutionary genre-bender could be a cumbersome yolk to bear for some acts, but Cadillac Sky wears it comfortably.

Each member of the band has a radically different musical taste and history. Simpson credits Matt Menefee, the group's banjo prodigy, for bringing an extensive education of rock history and appreciation to the group.

Menefee has a “great knowledge of rock music from Tool to the Beatles to Radiohead,” Simpson said. “I had interests in certain rock. I used to love to listen to Pearl Jam and Green Day when I was in high school, but I hadn’t really delved deep enough to be that informed.”

Simpson joked that the one thing he's indebted to Menefee for is introducing him to Radiohead.

“Their sound (Radiohead’s) and the Beatles' sound totally influence what we try to do in our own way, our own bluegrass imitation. Although they do it in a different way, I think they create a whole new set of layers and colors,” Simpson said.

The interesting musical backgrounds don’t stop there. Simpson said guitarist Mike Jump brings a serious love for ’70s classic rock to the group. He called Ross Holmes one of the most adventurous fiddle players around and credited bassist Andy Moritz with a background in classical music.

“He’s (Moritz) learning bluegrass on the fly but it also gives him an interesting point of reference to come from. He gives us a lot of different colors of paint to work with on the canvas, so we can paint a picture of a song that we think is appropriate,” Simpson said.

A bluegrass band citing Radiohead and The Beatles as major influences makes for a blend of distinctly bluegrass music fused with layered harmonies, chord structures and an experimental flare. Simpson said the band's eclecticism gives the group a musical ADD complex. The new album, Gravity's Our Enemy, continues to expand on the group's creative ambitions.

"We're going to be changing. There'll be some people that we lose on the bandwagon, but hopefully we'll pick up a whole lot more," he said. "We're trying to create something that's interesting for us and that inspires us."

Simpson said their fans should keep a close eye on Cadillac Sky in the next month, because something big and exciting—other than their new album—is coming down the pipeline.

"There's a new wind blowing in Cadillac Sky," he said. "Within a month we'll be able to pull back the curtain and let people in on a new change. It's going to be a really great thing for Cadillac Sky, and it'll be something exciting for people to witness and be a part of."

Simpson went on to admit that his statement was frustratingly vague and by and large a big tease to fans. He laughed, saying that being so obtuse was akin to being a big flirt.

“Back in the ’60s when Robert Kennedy came up with the idea of the Peace Corps, John Stewart (former member of the Kingston Trio) was friends with Bobby Kennedy and wrote quite a bit of music that had to do with the new frontier,” Grove said. The Kingston Trio came out with an album called New Frontier in 1967. “The songs and the friendship of the Kennedys and the time—that was the involvement the Kingston Trio had."

The Kingston Trio came to fame in the late ’50s and helped usher in the golden age of folk music. Their single, "Tom Dooley," shot to the top of the charts in 1958, establishing them as the premiere folk group in the world. With that song, they also introduced the world to some of the finest harmonies heard in music.

Grove remembers that success well, but not from the perspective of a band mate... he was only 10 years old at the time.

"We grew up in the mountains of North Carolina where they have all that Appalachian hill music. I liked it but it didn't turn me on. I was more a student of piano," Grove said. "But then my older sister brought home Live at the Hungry I by the Kingston Trio. I grabbed the album out of her hands and said, ‘That's my album and I'm going to be a part of that group.’ I actually said that. From that point on it's been a love affair that I've had with the Kingston Trio."

Grove kept his word and joined the group in 1976, after departures from founding members Dave Guard and Nick Reynolds and later member John Stewart. Other than founding member Bob Shane, Grove has been the longest-running member of the Trio's history, at 32 years.

Shane left the group in recent years after suffering a mild heart attack, which encouraged him to quit life on the road. However, Grove said Shane still has ownership in the group's name. Grove and other members Bill Zorn and Rick Dougherty keep in close touch with Shane.

Despite the personnel switching throughout the years, the group really hasn't changed as radically as one might think, because most of the members know each other well and have played together at one point or another.

"It sort of lends to the continuity and what fans expect to see," Grove said. "They say that we've kept it in the family."

He said the group as it stands is the “finest musical blend of personalities the group has ever had.” Zorn's powerful singing voice, Dougherty’s fine tenor, and Grove's own singing and banjo playing make for crispy harmonies and a strong stage presence.

Grove said fans, old and new, are never disappointed when they come out to a show. The group has been around so long, and has recorded a small mountain of albums, that they're sure to please no matter which of the more than 300 recorded songs they choose to perform in a night.

"Every song on an album became somebody's favorite," he said. "So we have this huge list of songs from which to draw. All these songs that kind of make up not just the repertoire of a group but sort of the fabric of society from that era (1950s-60s) in American history.”

Although the band has released compilations and live performances over the last two decades, there hasn't been a full album of new material in since the mid-60s. Grove said fans of The Kingston Trio should be excited to know that an album full of all new material should be released by summer 2009.

"When you're talking about a group that's been around for fifty years there's such a demand to hear them in concert that there's no pressure on us as far as the new songs are concerned," Grove said. "We don't change our style. We play guitars and banjos and play them very well. It's (the new album) going to be good, and if it sells 10 copies, then that's great. If it sells more, all the better."

This story has been posted in the following forums: : Headlines; RPCV Groups; Music; Humor