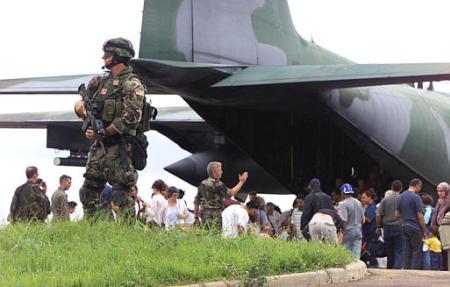 French troops led an evacuation of more than 2,000 Westerners from Bouake on Thursday and Friday. Sunday's daylong evacuation brought about 400 people -- including 55 Americans -- out of Korhogo and surrounding areas.

Commentary on the Successful Consolidation

What it looked like to PCVs in the Field

Exclusive: A Volunteer reports on the situation in the Ivory Coast 26 September 2002

The last U.S. Peace Corps volunteer evacuated from the civil war in the Ivory Coast 10 October 2002

Chronology of the disturbances in Ivory Coast

A message for all those in the Peace Corps.
A poem by Stephanie Smoluk

Hands that heal.
A peacefull land
Pure hearts dream to unite all.
To live in Harmony.
To live in happiness.
To love all.
With our minds, our soul,
we reach out and make the world
a loving place for all souls.
-Jan 13, 2003 By Stephanie R Smoluk