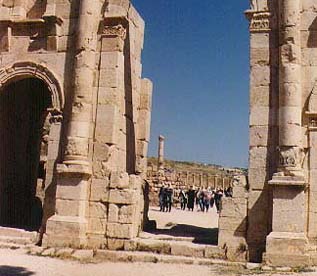 Many host nationals are torn between
aamerican individuals (Peace Corps Volunteers) and the agencies that come from the same country(USA). One cannot really blame them too much. recently a Brazilian doctor told me of a volunteer that was righteously depressed because in one of his monthly reports he named a peasant
who was a devoted organizer. That individual was assassinated. Coincidence?? The Volunteer thought not and was understandably quite overwhelmed with guilt over his friend's death.

The doctor concluded that the Volunteers are innocent victims of their idealism in a brutal Macchiavelian world. Tomas Belsky Brazil 65-67

WHERE IS THE PEACE IN PEACE CORPS? A LONG STANDING QUESTION OF THE AGENCY -PERHAPS WE SHOULD DO MORE TO NOT ONLY EDUCATE THOSE AT HOME ABOUT WHERE WE SERVE, BUT ALSO EDUCATE THOSE WHERE WE SERVE ABOUT THE MANY FACES OF AMERICANS AND WORK ONNOT JUST PROGRAMS BUT RELATIONSHIPS - A LESSON I LEARNED WHILE SERVING IN PC IN JORDAN - RPCV 1998-2000 - G.L. ANDERSON - GETTING PEOPLE TO LISTEN NOW IS MUCH MORE CHALLENGING

I am currently serving as a PCV in Morocco. The 'threat' of evacuation is always on my mind, as I know it is on others who I am serving with. I try not to let this effect my life and work here, but that is impossible. I do not feel unsafe here, and do not want to go home now. It is more important than ever to have Americans serving as 'ambassadors' in Arab countries, so that we can show them that all Americans don't hate Muslems.

However, I deal with much verbal harrassment over politics daily -- and this has increased over the last few months. I do feel that if Mr. Idiot decides to 'take action' in February that things can get a little scary here, as well as elsewhere in the Muslem/Arab world (and rightly so). If we are not evacuated, and Mr. B 'does something', I will probably choose to terminate my service, because I (personally) wouldn't feel completely safe. That may be seen as a 'cop-out' but it is what many PCV's feel right now in this country.

What is and has been going on for so long with Palestine/Israel is a true shame. I am very happy to be an American. But it appears to me that our politics are extremely one-sided in favor of Israel. I HATE POLITICS. I have never voted in an election nor will I ever do so. Politicians disgust me. I am just a man. An ordinary human being and want to live as such. Why can't we just treat one another with love, compassion, and respect? It ain't that hard if you try. . .

I have a friend serving in Morocco right now, Sarah Hill. Maybe you know her. I'm glad to hear you say it's not so bad there right now. I agree about the one-sidedness of our foreign policy. I was very apolitical while in college. I was interested in arts, and my time outside of my studies was taken up with this focus. The Peace Corps opened my eyes (to many things) and one was the role of politics. Based on the things I learn from my Middle Eastern friends and the media (which must always be taken with a grain of salt), I really believe our foreign policy and support of Israel is a fundamental source for the terrorism, anti-Americanism, etc. that we are facing. If there is anyone out there who can explain to me why we support Isreal and the historical reasons for the support, I would appreciate it. I think we must make some changes with regard to our unconditional support to Israel in order to improve our relations with the Arab world. But is this a priority with the administration?

By the way Michael, it is not a cop out to go home. When PC pulled us from our sites in Zimbawe because of political unrest, they gave PCVs the ridiculous option of staying on in the capital city and being attached to various NGOs to see if "things get better" or to COS. The majority of my fellow PCVs chose to COS. Probably ten percent of us remained behind in the hopes that we could sometime in the recent future return to our bush sites and finish our tour. This never happened of course, and was never going to happen. PC was just buying time so they wouldn't have to close the program. I finally left in October 2000 when I had completed two years. PC/Zimbabwe continued to function with a small group of volunteers based in completely revamped programs in Zim's four cities, and finally had to close the program a year later when nothing had changed, and the final straw being that a volunteer was murdered near her site. I'm not trying to scare you; the murder was reportedly completely unrelated to any of the political situations in the country. But you are not "copping out" by any means. The ten percent of us who stayed on are not to be looked at as "stronger" or better. It was a simply a personal choice and a myriad factors go into a decision like that. Good Luck to you.