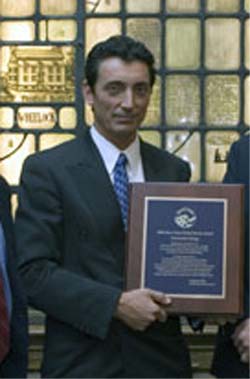 The present candidacy of James Arena-DeRosa for the position of Peace Corps director raises some important issues concerning what this unique organization needs as it prepares for its second half-century of service to the world, to the United States and to the volunteers who carry out its mission. The fact that he is currently a nine-year veteran of the agency almost by definition suggests that he is not the right person for the job of director. The Peace Corps needs a constant inflow of new blood if it is to be successful. That is why Sargent Shriver in his wisdom instituted the five-year rule nearly 50 years ago.

A Worrisome Possibility: The Candidacy Of James Arena-DeRosa
Posted by John Coyne on Friday, May 15th 2009

I met David Searles back in the mid-nineties in PC/HQ. He had just written his book about the Peace Corps and was visiting the agency and come to see me as I was then editing Peace Corps Writers & Readers in those pre-internet years. David has had careers in international business, government service and education. He was with the Peace Corps for five years, 1969-71–three years as the country director in the Philippines, and two years at headquarters as a Regional Director for North Africa, Near East, Asia, and Pacific (NANEAP), and as Deputy Director under John Dellenback. He went onto earn a Ph.D. from the University of Kentucky and published two books: A College For Appalachia (1995) and The Peace Corps Experience (1997), both by The University Press of Kentucky. He lives now with his wife in Owensboro, Kentucky. David wrote me after seeing the news about the possible appointment of James Arena-DeRosa. Here is what he had to say:

The present candidacy of James Arena-DeRosa for the position of Peace Corps director raises some important issues concerning what this unique organization needs as it prepares for its second half-century of service to the world, to the United States and to the volunteers who carry out its mission. The fact that he is currently a nine-year veteran of the agency almost by definition suggests that he is not the right person for the job of director. The Peace Corps needs a constant inflow of new blood if it is to be successful. That is why Sargent Shriver in his wisdom instituted the five-year rule nearly 50 years ago.

I should make it clear at the start that I do not know Mr. Arena-DeRosa and my comments are not directed at him personally; they are meant to address the overriding issue - or is it a principle - of the need for an ever renewing staff and administrative leadership.

When Shriver founded the Peace Corps, he incorporated a number of significant departures from prevailing organizational norms. None was more innovative than the personnel plan he called ‘in, up and out’. Later called the five-year rule, the plan required members of the management and administrative staff of the Peace Corps to leave after five years to make room for new people. The aim of this policy was to ensure that the Peace Corps was led by a staff that was constantly refreshed by new blood and to prevent the bureaucratic calcification that handicapped so many institutions.

One easily forgets just how dramatic a departure the five-year rule was. In the early 1960s the conventional wisdom said that a long-serving cadre of proven managers was key to organizational success. Corporations were led by company veterans who had worked for only one employer; the military depended on men who had dedicated their adult lives to the armed forces; academia and the church were no different. Even Congress, despite the requirement of regular elections, was led by members who measured their incumbencies in decades not years. In such a setting Shriver’s policy was not just innovative, it was tradition shattering.

Now, as during some other times in the Peace Corps’ existence, the five-year rule seems to be considered outmoded or unnecessary. This is, in my opinion, bad policy, as is amply illustrated by what happened in the early 1970s. On his arrival the third Peace Corps director, Joe Blatchford, discovered that many overseas staff, especially those serving as country directors, were well beyond their five-year limits. Once he realized that the implementation of his ‘New Directions’ were being thwarted by these same folks, he vigorously enforced the five-year rule, sent dozens of staff members home, and brought in a new batch (me among them) who were not locked into an existing way of seeing and doing things. The hew and cry from the ‘old-timers’ was awful to behold, but change happened.

Presently there is another somewhat worrying practice in the agency - worrying at least to those who support the spirit of the five-year rule. Many former staff members having been away for a period equal to the time of their service - as permitted under the legislation - reappear on staff rolls. These men and women are dubbed by the first-time staff members as ‘retreads.’ One wonders if they also bring back the past, rather than look to the future. (In this connection it is interesting to note that a New York Times crossword puzzle asked recently for a one-word definition of “hackneyed work based on an old idea.” The answer was ‘retread.’)

There is an immense satisfaction in serving on the Peace Corps staff - for me it was the best job I ever had. A few years ago a departing staff member nailed it when he said in support of the five-year rule “otherwise we’d be tempted to hang on to those bountiful tits forever.” Staff turnover in the Peace Corps is a blessing, not a curse.

It is easy to criticize the five-year rule: (1) There is precious little institutional memory; (2) Personal relationships between staff and host country are more tentative when the American half of the equation keeps changing; (3) The staff member who initiates a program is often gone when it is implemented; (4) Just when a staff member becomes familiar and comfortable with the language, customs, and conditions of service he or she leaves.

But the advantages are even more important:

2. The bureaucratic ossification that bedevils so many institutions is kept to a minimum. Nothing would so diminish the agency’s effectiveness as an ‘old corps’ mentality that sees the past as sacred.

3. Faced with the Herculean task of achieving - or at least contributing to - world peace, in time staff members encounter burnout just as do others in high stress positions. The constant influx of new, even ’starry-eyed,’ newcomers maintains the level of enthusiasm and optimism essential to Peace Corps success.

On balance, the advantages of the five-year rule outweigh the disadvantages. This is especially true now that many staff positions are held by former volunteers. They bring with them two or three years of Peace Corps experience, which significantly shortens the learning curve. Add to this the possibility under existing legislation of a sixth year of service in special circumstances - and the presence of some retreads - and the agency’s need for stability is being met. But without regular staff turnover both abroad and in Washington, one can almost predict a gradual hardening of the bureaucratic arteries that will eventually make the Peace Corps another of those government entities that do not listen, are not responsive, and seemingly do not care. Prevent that outcome; keep the five-year rule; and extend the search for a new director to the largest pool of talent possible.

This story has been posted in the following forums: : Headlines; Candidates; Five Year Rule; Speaking Out