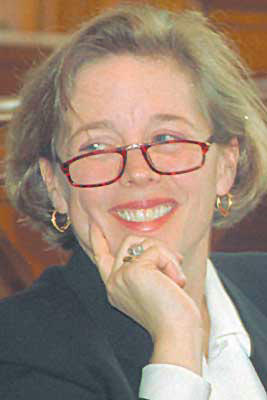 ADVERTISEMENT
BOSTON (AP) Niki Tsongas, who learned the rigors of campaigning and life in Washington as the wife of the late U.S. Sen. Paul Tsongas, says she's decided against a run for John Kerry's seat, should he win the White House.

Tsongas had said last month she was seriously considering a run to be the first woman from Massachusetts elected to the U.S. Senate.

Ultimately, however, the money she'd need to raise to mount a winnable campaign was too much, she said Tuesday.

''It wasn't a scientific process but I weighed many different things,'' Tsongas said in a telephone interview with The Associated Press.

''Finally, what it came down to was I just felt given how much of a longshot I would have been having never served, never having held office that I needed to be able to raise a certain amount of money in the next two months.

''With the preoccupation with the president, the fact it's uncertain whether there would be a race after November, I just felt that I probably could not put together enough money to be competitive immediately,'' said Tsongas, dean of external affairs at Middlesex Community College. Her husband, a former presidential candidate, died of cancer in 1997.

Anyone coming into the race from outside public office will face daunting fund-raising challenges because several current members of Congress have expressed interest in the job, should Kerry defeat President Bush in November.

U.S. Rep. Martin T. Meehan, who helped write the nation's campaign finance law, has raised more than $4 million so far. He defended the campaign war chest Tuesday, saying he raised the bulk of the money in small donations from Massachusetts residents.

With about $4 million in cash on hand, Meehan far outpaced the fund-raising efforts of other members of the Massachusetts congressional delegation this summer, records show.

The Lowell Democrat raised $590,973 between July 1 and Aug. 25, twice the $253,000 taken in by Rep. Edward J. Markey, D-Malden, according to federal fund-raising filings. Meehan's total campaign funds almost double the $2.1 million in the account of Markey, the delegation dean.

Meehan was one of the authors of the federal campaign finance law barring so-called ''soft money'' corporate, union and unlimited donations for federal elections.

He said his ability to raised millions in small, individual contributions shows the law is working. Since January, 79 percent of his contributions have come from inside Massachusetts, the largest percentage of any of the state's 10-member House delegation.

''I think my fund-raising is an example of what we want in terms of reaching out to individuals,'' he said. ''My average contribution is among the lowest in the congressional delegation. I don't think it's inconsistent at all.''

There are other potential Democratic candidates who could be formidable foes. They include former attorney general Scott Harshbarger; former state treasurer Shannon O'Brien, and Middlesex District Attorney Martha Coakley. Coakley said Tuesday she will likely decide in the next two weeks whether or not to run.

Republicans are also planning to field a candidate if Kerry wins, but are reluctant to talk about it, saying they are convinced President Bush will be re-elected.

If Kerry were elected, a primary would likely be held in February, with the special election in March.

This story has been posted in the following forums: : Headlines; COS - Ethiopia; Congress; Election2004 - Tsongas

I wish Niki had run. I hope she runs for something in Massachusetts. There will always friends ready to help her.


Marty will win if Kerry is elected. Ed Markey will be the darling of the unions but ultimately Marty Meehan has done more work than any other Congressman in the Massacuchusetts Delegation. He has the humble yet real leadership qualities necessary for the position.

Look at what Marty has done in changing Peace Corps safety and security. He responds correctly.