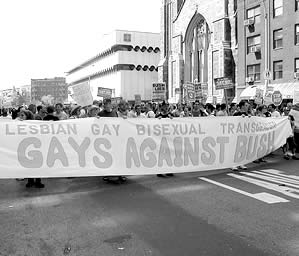 Saying ‘no!’ to George W. Bush
Roger Doneley joined protesters in New York outside the RNC because ‘it’s time’

Caption: Houstonian Roger Donley was among tens of thousands who protested the Republican convention in New York. He knows Texas will vote for Bush, but said he could still say, ‘No.’

If you ask Houston lawyer Roger Donley why he went to New York to spend a week protesting at the Republican National Convention, his answer comes quickly.

“I have been shocked by the things the Bush administration has done, but hear constantly that there is nothing we can do in Texas since our Electoral College votes will go to Bush,” he said. “Then I decided that was not enough, and I could stand up and say ‘No,’ at least.”

Donley answered that question often when he was in New York. His usual outfit for protesting was a “Texans for Kerry” T-shirt. (He took several, he reported).

His picture was in the local edition of the New York Times three different times, giving him a sense of notoriety. “Some of the other protesters recognized me from my picture,” he said.

He added, “It helped that one of the people on the trip to New York is a reporter for the New York Times.”

Donley and the reporter traveled with a group of about a dozen men who connected through a Web site set up to organize the protests.

The trip began in Austin and picked up passengers on the road north. Forty hours later, they arrived in New York.

“Alan, the reporter, had lived in Texas, so I don’t know if anti-Bush Texans are particularly newsworthy or if any other group traveling across country would have done,” Donley said objectively, noting that another passenger was a documentary filmmaker.

“I signed up for the trip because I don’t like to fly,” Donley said, “and when I learned that one of the passengers is a reporter, I hoped I could get some publicity for gayyearbook.com.”

Gayyearbook.com is one of Donley’s favorite projects. The site, sponsored by P-FLAG, shows high school pictures of gay adults as teens. It is anonymous, showing the year they graduated from high school and their current occupation.

“Except there is one,” Donley noted, “that lists ‘suicide.’ It was sent in by the young man’s mother.”

It worked. One of the New York Times pictures features Donley wearing his gayyearbook.com T-shirt. “It wasn’t in the national edition, but there are lots of people in New York who know about it now,” he said.

Submissions are still welcome, Donley said. “The site has grown tremendously since it began, but we’d love to see it triple or even quadruple in size.”

Instructions are on the site. “Many gay teens think there is no one like them. Even if they know about gay adults, they do not believe they were gay teens.”

One of Donley’s favorite stories is one involving a teenage girl who wanted to go to the prom with her girlfriend.


Encountering anti-Americanism
Donley, 36, is currently on what he describes as “recess” from practicing law. “I had spent eight years working for a big firm, doing intellectual property law, and was burned out,” he said.

He has spent a lot of his recess traveling, and that has fueled his concerns about Bush.

“I was born in Ghana, and traveled a lot, and don’t think I ever encountered such anti-U.S. sentiment before, even when I was in Russia in the 1980s. I was in Canada recently and was really shocked. I thought [Canada] is an ally,” Donley said.

He went to high school in Chicago and then attended Baylor because “my sister was there and they offered me a scholarship.”

Donley got a degree in computer science and spent two years in the Peace Corps in Belize. He went to law school in Chicago, and moved to Houston in 1995. “It was the weather. I did not ever want to spend the winter in Chicago again.”

Though he wore a Kerry T-shirt in New York, Donley said, he has voted Republican in the past.

“My first vote, in 1988, was for the first George Bush,” Donley said. “Then he kept Quayle on the ticket, and I couldn’t support him again. I thought Quayle was really dumb, but that was before I met George W. Bush. Gays in the military was a big issue then, too.

“I don’t think I would have protested if the Republicans had nominated McCain, for example,” Donley continued. “It is just that Bush is so wrong on so many issues. You can work you way through the Constitution and check off the sections he has abused.”

Donley has posted his snapshots of the protests on his Web site (www.patriot.biz).

The New York experience left Donley with a sense of relief. “I saw that people care a lot about what’s going on and realized that Bush is not going to get away with his agenda.”

Donley said that he doubts that he will go to some other state to campaign. “I’ll work here. More is at stake than just Bush.”

This story has been posted in the following forums: : Headlines; COS - Belize; Gay Issues; Politics; Election2004 - Bush