Congo Kinshasa RPCV Lori Carruthers began to look at her possessions, carefully assembled over her adulthood, with a different eye 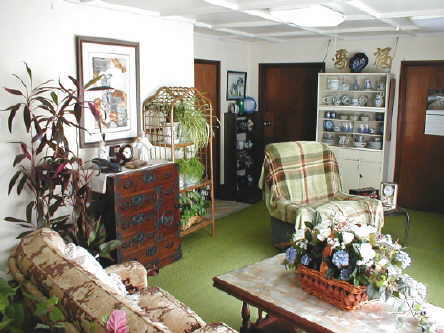 Congo Kinshasa RPCV Lori Carruthers began to look at her possessions, carefully assembled over her adulthood, with a different eye

The realization that I had to sell my house came as a bit of surprise and shock. I don't know why; it should have been an easy decision. Recently divorced, I could not manage the expense and upkeep alone. Besides, the flow of the Cape Cod was never functional and the small rooms gave me the continual itch to remodel and expand, despite the two-story house being too big for one person.

Nonetheless, it was a difficult decision to sell the house that once was a symbol of a bright future with my then-husband, filled with promise, high hopes and stability. I stubbornly held on to the house for months after the divorce, refusing to admit failure, struggling to reach a point of wanting rather than having to sell. Eventually my internal battle subsided, as real estate prices soared.

Little did I realize that was only the beginning of my emotional journey from past to present, as I was forced to look to my new future. Upon the counsel of my real estate agent, I packed up wooden sculptures that potential homebuyers might find objectionable. I reluctantly hid away treasures carefully selected over two decades of international travel, stripping my personality and past away in order not to offend. I de-cluttered and tossed old furniture, trash-bin finds, and half-finished projects to prepare for strangers and neighbors traipsing through bedrooms and bathrooms and peeking in closets. But in downsizing from a four-bedroom house with two storage sheds to a one-bedroom apartment, even one with lots of closet space, I thought I needed to keep only the essential items. My former husband, out of choice, was leaving with little more than the clothes on his back and those that filled his overflowing closet.

I began to look at my possessions, carefully assembled over my adulthood, with a different eye. I have a few items from my childhood: my first teddy bear, "Cuddles," and a silhouette portrait of me by Mrs. Lakin, my kindergarten teacher. Much of my teenage memorabilia, including class yearbooks, was tossed years before, after becoming moldy in my mother's damp basement. The things that I have now are gifts from friends and acquaintances, or items that an adult version of me chose to complement my home and lifestyle.

I considered selling my African carvings, most collected more than 15 years ago, while a Peace Corps volunteer in what was then Zaire. I went so far as to get references for a buyer, but then abruptly realized that the dollar amounts recovered would not compensate for the sentimental value. So many of my things remind me of friends and the times we shared in the parts and pieces of my past, places that no longer exist as they once were. The carved wooden bowl was a gift from an older (and richer) English gentleman who was my classmate in the South of France, with whom I shared dinner and wine in restaurants I couldn't afford. The green wicker sewing basket was a going-away gift from Jerry, a co-worker in San Francisco whom I knew before AIDS ravaged the gay community, and I often wonder if he has survived. Some people may have photo albums and others songs to refresh their memories. For me, a chipped white ceramic turtle reminds me of a fourth-grade girl and her first sweetheart.

Please, whoever would be intouch with Lori Carruthers, let her know that I'd appreciate getting in contact with her again
My name is Ilunga Kasweka
my phone# is 416-529-5182 (Toronto, Canada)
ikasweka@hotmail.com
former student of Lori Carruthers
in Pindi mission (Lunkobo)