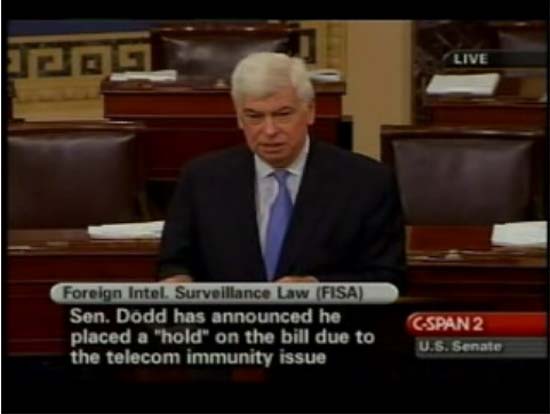 Senator Chris Dodd vowed to filibuster the Foreign Intelligence Surveillance Act that would grant retroactive immunity to telecommunications companies that helped this administration violate the civil liberties of Americans. "It is time to say: No more. No more trampling on our Constitution. No more excusing those who violate the rule of law. These are fundamental, basic, eternal principles. They have been around, some of them, for as long as the Magna Carta. They are enduring. What they are not is temporary. And what we do not do in a time where our country is at risk is abandon them." Senator Chris Dodd of Connecticut served as a Peace Corps Volunteer in the Dominican Republic in the 1960's.

Mr. President, for 6 years the President has demonstrated time and again that he doesn't respect the role of Congress, nor does he respect the rule of law. It is the latter point that I want to address this morning because it is the rule of law which draws us all together, regardless of politics, ideology, or party. It is the rule of law, not of men, which we swear to uphold when we take the oath of office in this Chamber, as Members do in the other Chamber, and certainly as the President does on January 20 every 4 years.

For 6 years this President has used scare tactics to prevent the Congress from reining in his abuse of authority. A case in point is the current direction this body appears to be headed in as we prepare to reform and extend the Foreign Intelligence Surveillance Act.

Many of the unprecedented rollbacks to the rule of law by this administration have been made in the name of national security. The Bush administration has relentlessly focused our Nation's resources and manpower on a war of choice in Iraq. That ill-conceived war has broken our military, squandered our resources, and emboldened our enemies.

The President's wholesale disregard of the rule of law has compounded the damage done in Iraq, made our Nation less secure, and as a direct consequence of these acts, we are far less secure, far more vulnerable, and certainly far more isolated in the world today.

Consider the scandal at Abu Ghraib, where Iraqi prisoners were subjected to inhumane, humiliating acts by U.S. personnel charged with guarding them.

Consider Guantanamo Bay. Rather than helping to protect the Nation by aggressively prosecuting prisoners at Guantanamo Bay, these individuals have instead become the symbol of our weakened moral standing in the world. Who would have ever imagined it?

Consider the secret prisons run by the Central Intelligence Agency and the practice of extraordinary rendition that allows them to evade U.S. law regarding torture.

Consider the shameful actions of our outgoing Attorney General who politicized prosecutions in the U.S. Attorney's Office, who was more committed to serving the President who appointed him than laws he was sworn to uphold as Attorney General.

Consider the Military Commissions Act, a law that allows evidence obtained through torture to be admitted into evidence.

It denies individuals the right to counsel.

It denies them the right to invoke the Geneva Conventions.

And it denies them the single most important and effective safeguard of liberty man has ever known, the right of habeas corpus, permitting prisoners to be brought before a court to determine whether their detainment is lawful.

Each of these policies share two things in common.

First, they have severely weakened our ability to prosecute the global war on terrorism, if for no other reason than they have made it harder, if not impossible, to build the kind of international support and cooperation we absolutely need to succeed in our efforts against stateless terrorism.

And second, each has only been possible because the U.S. Congress has not been able to stop the President in his unprecedented expansion of executive power; although I might add, some in this body have certainly tried.

And those are not my words. Those are the words of Supreme Court Justice Sandra Day O'Connor, nominated by President Ronald Reagan.

Today, it appears that we are prepared to consider the proposed renewal of the Foreign Intelligence Surveillance Act, a law that whatever form it eventually takes will almost certainly permit the Bush administration to broadly eavesdrop on American citizens.

Legislation, as currently drafted, that would grant retroactive immunity to telecommunications companies that helped this administration violate the civil liberties of Americans and the law of this Nation.

While it may be true that the proposed legislation is an improvement over existing law, it remains fundamentally flawed because it fails to protect the privacy rights of Americans or hold the Executive or the private sector accountable if they choose to ignore the law.

That is why I will not stand on the floor of the Senate and be silent about the direction we are about to take.

It is time to say: No more.

No more trampling on our Constitution.

No more excusing those who violate the rule of law.

These are fundamental, basic, eternal principles. They have been around, some of them, for as long as the Magna Carta.

What they are not is temporary.

And what we do not do in a time where our country is at risk is abandon them.

My father served as executive trial counsel at the Nuremberg trials of Nazi war criminals in 1945 and 1946. What America accomplished at those historic trials was not a foregone conclusion. It took courage.

When Joseph Stalin and even a leader as great and noble as Winston Churchill wanted to simply execute the Nazi leaders, we didn't back down in this country from our belief that these men, as terrible as they were -- some of the worst violators in the court of history of mankind -- ought to have a trial. We did not give in to vengeance.

As then, the issue before us today is the same.

Does America stand for all that is still right with our world. Or do we retreat in fear?

Do we stand for justice that secures America, or do we act out of vengeance that weakens us?

But the rule of law is not the province of any one political party. It is the province of each and every one of us as American citizens, on our watch and our generation, to make sure we are safer because of its inviolable provisions.

Mr. President, I know this bill has not been reported out of the Judiciary Committee yet.

But I am here today because if I have learned anything in my 26 years in this body, particularly over the last 7 years, it is that if you wait until the end to voice your concerns, you will have waited too long. That is why I have written the majority leader informing him that I will object to any effort to bring the legislation to the Senate floor for consideration.

I hope my colleague, chairman of the Judiciary Committee, Senator Leahy is able to remove this language from the FISA bill. Pat Leahy is as strong a defender of the Constitution as any Member of this body.

But if he is unable to do so, I am prepared to filibuster this bill.

President Bush is right about one thing: The debate is about security but not in the way he imagines it.

He believes we have to give up certain rights to be safe.

I believe the choice between moral authority and security is a false choice. I believe it is precisely when you stand up and protect your rights that you become stronger, not weaker, as a nation.

The damage that was done to our country on 9/11 was stunning. It changed the world forever.

But when you start diminishing our rights as a people, you compound that tragedy. You cannot protect America in the long run if you fail to protect our Constitution. It is that simple.

History will likely judge this President harshly for his war of choice and for fighting it with a disregard for our most cherished principles.

But history is about tomorrow. We must act today and stand up for the Constitution and the rule of law.

Mr. President, this is the moment. At long last, let us rise up to it.

I urge my colleagues to join me in this effort.

This story has been posted in the following forums: : Headlines; Figures; COS - Dominican Republic; Politics; Congress; Internet;Speaking Out; Election2008 - Dodd

For bringing to a head:

The need to return to law and order,
possesing Respect for decent principles
and our FellowPersons at home and abroad.

Look at the eyes. He is tired. He hasn't stopped it, they are spying on American citizens and anybody who thinks different.

What happened to the VP spot? what a shame oooohhh