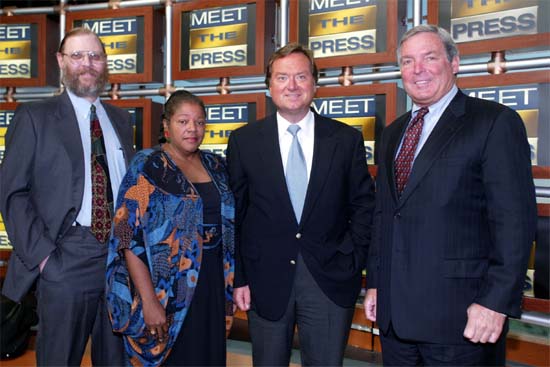 Returned Peace Corps Volunteers attended the taping of NBC Sunday Morning News Show "Meet the Press," and got a behind the scenes look of how the show is produced as they watched NBC News Moderator Tim Russert interview Colin Powell, Hillary Rodham Clinton and Brent Scowcroft. After the taping they met with Mr. Russert and discussed Peace Corps Issues including the Peace Corps legislation pending in Congress, the history of the Peace Corps, and the role of former Peace Corps Directors Sargent Shriver and Jack Vaughn.

"It was an exciting experience to have the opportunity to talk with Tim Russert, who along with Charlie Peters and I.F. Stone, has been one of the models for what we try to do journalistically with Peace Corps Online," said PCOL Publisher Hugh Pickens. "Russert's job is to do the research and then moderate a discussion in which all viewpoints are presented and debated - that is exactly what we try to do with Peace Corps Online," Pickens added.

During their meeting, Pickens presented Russert with a copy of Peace Corps Online's latest publication, "Keeping Kennedy's Promise" by Kevin Lowther and C. Payne Lucas, the recently retired President of Africare. The book is about the Peace Corps during the 1960's and 1970's, the lessons learned on how to run the organization, and how these lessons apply to the Peace Corps today. "It was especially rewarding to meet a mainstream journalist who, because of his background, interest, and relationships with RPCVs, is so knowledgeable about the Peace Corps and so sympathetic to its goals," said Pickens.

Tim Russert is the moderator of "Meet the Press," and political analyst for NBC’s "Nightly News with Tom Brokaw," and the "Today Show." He also anchors "The Tim Russert Show," a weekly program on CNBC that examines the role of the media in American society. Russert is the senior vice president and Washington bureau chief for NBC News, and is also contributing anchor for MSNBC.

Russert joined NBC News in 1984. In April 1985, he supervised the live broadcasts of NBC News’ "Today" program from Rome, negotiating and arranging an appearance by Pope John Paul II, a first for American television. In 1986 and 1987, Russert led NBC News’ weeklong broadcasts from South America, Australia and China. In 1990, he oversaw production of the prime-time news special "A Day in the Life of President Bush" and in 1993, "A Day in the Life of President Clinton." He has covered eight U.S./Russia summits in Geneva, Malta, Washington, Moscow and Vancouver. In 1998, Russert was the first to break the story that House Speaker Newt Gingrich (R-Ga.) would resign from Congress and in 1999, he was the first to report that Hillary Rodham Clinton might consider running for the U.S. Senate from New York. In 2000, he conducted the first Sunday morning public affairs debate with democratic Presidential hopefuls Gore and Bradley.

He has received 22 honorary doctorate degrees from American colleges and universities. Russert has also lectured at the John F. Kennedy, Lyndon B. Johnson, Richard M. Nixon and the Ronald Reagan Presidential Libraries.

In 2001, The Washingtonian magazine named Russert the best and most influential journalist in Washington, D.C., describing "Meet the Press" as "the most interesting and important hour on television."

His "Decision 2000" "Meet the Press" interviews with George W. Bush and Al Gore won the Radio and Television Correspondents’ Association’s highest honor, the Joan S. Barone Award for excellence in journalism and the USC Annenberg Center’s Walter Cronkite Award. Russert was also the recipient of the John Peter Zenger Award, the American Legion Journalism Award, and the Allen H. Neuharth Award for Excellence in Journalism.

Irish America magazine has named Russert one of the top 100 Irish Americans in the country and he was selected as a Fellow of the Commission of European Communities. In 1999, Brill’s Content named him Best Talk-Show Host and in 2000, he was rated No. 1 by Capitol Hill press secretaries as top political journalist (George magazine).

Russert is a trustee of the Freedom Forum’s Newseum, and a member of the Board of Directors of the Greater Washington Boys and Girls Club, and America’s Promise-Alliance for Youth. In 1995, the National Father’s Day Committee named Russert "Father of the Year" and Parents magazine honored him as "Dream Dad" in 1998.

Before joining NBC News, Russert observed firsthand the inner workings of the executive and legislative branches of government as counselor in the New York Governor’s office in Albany from 1983-1984, and a special counsel in the United States Senate from 1977-1982.

Russert was born in Buffalo, New York, on May 7, 1950. He is a graduate of Canisius High School, John Carroll University and graduated with honors from the Cleveland-Marshall College of Law. He is admitted to the bar in New York and the District of Columbia.

Russert is married to Maureen Orth, a writer for Vanity Fair magazine. They live in Washington, D.C. with their son, Luke.
Click on a link below for more stories on PCOL

yOU SHOULD INCLUDE WHO STARTED IT HOW IT WAS STARTED WHEN AND WHY.

What is Peace Corps?

The Peace Corps traces its roots and mission to 1960, when then-Senator John F. Kennedy challenged students at the University of Michigan to serve their country in the cause of peace by living and working in developing countries. From that inspiration grew an agency of the federal government devoted to world peace and friendship.

Since that time, more than 170,000 Peace Corps Volunteers have been invited by 136 host countries to work on issues ranging from AIDS education, information technology, and environmental preservation.

Today's Peace Corps is more vital than ever, stepping into new countries like East Timor, working in emerging and essential areas such as information technology and business development, and committing more than 1,000 new Volunteers as a part President Bush's HIV/AIDS Act of 2003. Peace Corps Volunteers continue to help countless individuals who want to build a better life for themselves, their children, and their communities..


What is Peace Corps' history?


Over four decades of Peace Corps. And we're still growing.

Since 1960, when then-Senator John F. Kennedy challenged students at the University of Michigan to serve their country in the cause of peace by living and working in developing countries, more than 170,000 Peace Corps Volunteers have served in 136 countries all over the globe. They've been teachers and mentors to countless children. They've helped farmers grow crops, worked with small businesses to market products, and shown women how to care for their babies. More recently, they've helped schools develop computer skills, and educated entire communities about the threat of HIV/AIDS.

Throughout its history, the Peace Corps has adapted and responded to the issues of the times. In an ever-changing world, Peace Corps Volunteers meet new challenges with innovation, creativity, determination, and compassion. These are the qualities that have allowed the Peace Corps to achieve its mission since 1961, and they remain the keys to achieving that mission today.


What is Peace Corps' mission?

Hello, My name is david Bart, and I served in Romania between 2002-2004. I am now working for Americorps, and am attempting to develop an effective recruitment strategy for the NGO I am working with. Can you please tell me if anyone has done a study on which universities tend to produce the highest number of PCVs? This could come in useful for recruiting Americorps volunteers as well.

Here is a story with a list of the Top Colleges and Universities that produce graduates who decide to join the Peace Corps.

I am interested in producing a Peace Corps picture book with photographs taken by PCVs around the world. Please advise me how best to communicate with as many RPCVs as possible. Is there a newsletter I could post on? Thanks.

to whom it may concern:

the world leaders of mother earth need to include North Korea in their talks in some matter if this problem is going to be solved without blood shed. North Korea may be apart of the tarrorism problem, i don't know, but jimmy carter, bill clinton, and condilica rice are great negotiatiors inwhich this matter can and will be resolved. this matter maybe seen as an ambush, but proper security and intellagence can allow for economic prosperty for third world countries, as well as the united states ( a win, win situation for all, is that what all of us want). think about it and develope a plan to pass along. maybe your organization can do something about it, instead of other means. i am just a concerned citizen who wants peace to travel the world and see all that the world has to offer, but i know that there is a way to get this done ( maybe not today or soon, but i know your organization understands both sides of the coin and works to get the best interest of the people in place). just suggestions and words of incuragement from a young ideal man. i do what i can from home, this is all i feel i can do. please help.

U.S. DEMOCRATS ARE NOT INNOCENT

Many of the comparisons between Iraq and Vietnam used by democrats are illogical. Our brave soldiers are volunteers, and not largely draftees as in the Vietnam War. In addition, the presence of U.S. troops in Iraq has now evolved into more of a "police action" than an actual war. In his decision to invade Iraq, President Bush’s only mistake was to trust incorrect intelligence reports. But many from the U.S. Democratic Party made the same type of mistake. For example:

"If Saddam rejects peace and we have to use force, our purpose is clear. We want to seriously diminish the threat posed by Iraq's weapons of mass destruction program."
President Clinton, Feb. 17, 1998.

"We know that he has stored secret supplies of biological and chemical weapons throughout his country."
Al Gore, Sept. 23, 2002 (Vice-President under Clinton - ran for President in the year 2000)

"We have known for many years that Saddam Hussein is developing weapons of mass destruction."
Senator Ted Kennedy (Massachusetts), Sept. 27, 2002.

"I will be voting to give the President of the United States the authority to use force — if necessary — to disarm Saddam Hussein because I believe that a deadly arsenal of weapons of mass destruction in his hands is a real and grave threat to our security."
Senator John F. Kerry (Massachusetts), Oct. 9, 2002.

“He (Saddam Hussein) has also given aid, comfort, and sanctuary to terrorists, including al-Qaida members....Left unchecked, Saddam Hussein will continue to increase his capacity to wage biological and chemical warfare, and will keep trying to develop nuclear weapons."
Senator Hillary Clinton (New York), Oct 10, 2002

As you can see from the above, many democrats have very short memories when it comes to the judgments of leaders in their own political party.

Friends,
According to Just Foreign Policy there have been, as of February 21, 2014, an estimated 1,455,590 Iraqi deaths due to the U.S.-led invasion of March, 2003. This number continues to grow. For details see: http://www.justforeignpolicy.org/iraq
For information on other nations see: http://www.countercurrents.org/lucas240407.htm
James A. Lucas, Member: Veterans for Peace, American Civil Liberties Union, National Association of Social Workers