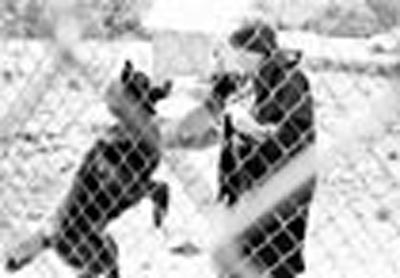 Read and comment on this story from the Sullivan County Democrat on Peru RPCV Joan LaLiberte who raises a wolf cross at her church rectory in Callicoon Idaho at:

The new priest at St. James Episcopal Church in the hamlet has set up shop in the church rectory with her cat, dogs . . . and a wolf cross.

And for all the ferocious rumors that surround a wolf owner, the Rev. Joan LaLiberte has heard nothing but compliments.

"The people at the church have been positive," she said. "And the neighbors haven’t complained.

"They’ve even said it’s kind of neat when he howls."

Which is rare, she adds. Contrary to myths, wolves don’t howl at the moon – they let out a mournful sound when they’re feeling alone, to let the other members of their pack know where they are.

LaLiberte transferred to the Callicoon parish in September from Idaho, where wolf crosses are almost as common as a labrador retriever in people’s homes.

She brought two of her pets with her in September, then headed back cross-country last month to bring home Singer, a 7-year-old wolf cross, and Ptchee, a 9 1/2-year-old Australian shepherd/Husky cross – the buddies who cuddle up on LaLiberte’s bed at night.

She’d kept Singer out in the open back in Idaho, allowing him to run around her home and interact with children during lectures at grade schools, all with the permission of the state’s fish and game commission. When she interviewed for the job in Callicoon, LaLiberte made it clear to the church that Singer would be making the trip too.

And when she came to New York, she approached the federal government for a permit, and later the state, for permission to keep Singer.

She had to jump through a lot of hoops, LaLiberte said, but it’s worth it.

The state requires her to keep Singer muzzled if he’s out in public, and she’s subject to unannounced visits by officials. She keeps the pup behind two locked gates, where he spends the day romping with Ptchee.

"It just seems like overkill for this little guy," she said. "If he were an aggressive dog, I wouldn’t have him in the first place. I wouldn’t want a wild animal."

Singer is a domestic-bred dog, even hand-fed as a baby by a breeder. His parents, LaLiberte said, were also domestic-bred despite their wolfish background. Singer even has a few drops of German Shepherd in him, classifying him as a wolf cross rather than a full-blooded wolf.

"Being captive-bred, he’s more like a dog than a wolf," LaLiberte explained.

And that means he spends his days tagging along after his master when he’s in the house. The "alpha male" defers to the wishes of his mate, Ptchee, who gets the head of the bed next to Mom at night and the best dog biscuits at snack time.

And Singer’s favorite thing to do is pick a Kleenex out of LaLiberte’s pocket and spend the next hour wandering the house with the handkerchief sticking out of his mouth.

Singer likes to grab ahold of LaLiberte’s braid and play with her, but she’s learned to discourage moves like that in case someone walking by on the street notices and misconstrues the circumstances.

She’s concerned for Singer’s safety as much as anyone else in Callicoon, because though he’s a sweet animal, she realizes the misperceptions are there.

But she’s never had to muzzle her pet, and taking him into classrooms to teach ecology was always a successful venture.

And after keeping the canine for six years, LaLiberte wouldn’t want to have to give up her pet.

"She’s my lieutenant," LaLiberte noted with a laugh. "And he has to have companionship.

"That’s why I left her with him in Idaho – he’d have pined to death without her."

LaLiberte invites anyone from the community to stop by her Callicoon home and meet Singer. Though she keeps him inside two gates, visitors can see him through the chain link fence and enjoy his antics.

This story has been posted in the following forums: : Headlines; What RPCVs are doing; COS - Peru

Just saw the article on Joan LaLiberte and her wolf cross dog. Joan and I were friends as teenagers. Have lost her address and would love it if she could email me. I'm very proud of her that she became a minister! We were both going to ride in rodeos: we were 'horse nuts'! What a great article. Karen (Skinner)Kirshner. My email is: kkhorses@juno.com