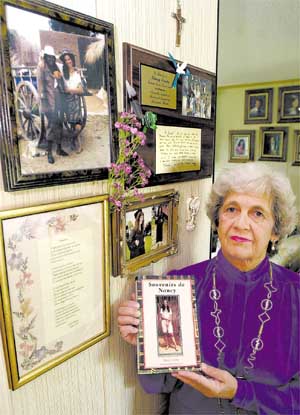 Read and comment on this story from the Orlando Sentinel on Nancy Coutu, a volunteer in Madagascar, who was raped and beaten to death April 9, 1996, by three men outside her village. Devastated, her mother, Connie Coutu became focused on preserving her youngest daughter's memory. When her daughter's journals arrived in the mail, Coutu realized the best way to tell the world of her daughter's work in Africa. The result is Souvenirs de Nancy, a chronological look at the experience of the Peace Corps volunteer as told through her journal entries and letters to family members. Read the story at:

Caption: Tribute. Connie Coutu holds the book she has self-published using her daughter's journals and letters during a stay in Matagascar.

She also wanted to form a deep connection with the 350 poverty-stricken residents of Bereketa -- a difficult feat considering she was a white woman still learning the language. But the 29-year-old was happy with the progress she was making.

"Everyone was so fascinated when I explained how the bright star by the moon each night is Venus," she wrote on March 29, 1996. "It was thrilling to teach them something so important. I guess there is a lot I can teach them, after all."

It would be the last letter to her mother. After two years of volunteering in Madagascar, Nancy Coutu was raped and beaten to death April 9, 1996, by three men outside her village. 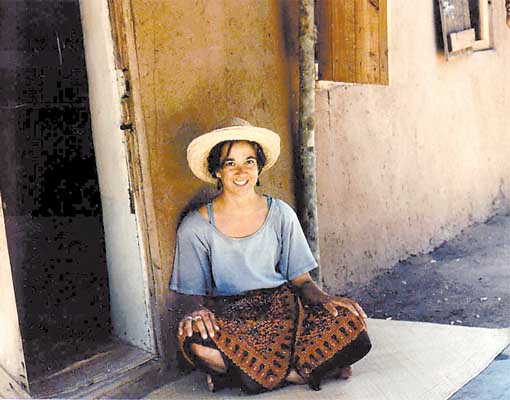 Caption: Volunteer Nancy Coutu is remembered in Matagascar for her efforts to help build a school.

Devastated, Connie Coutu became focused on preserving her youngest daughter's memory. When her daughter's journals arrived in the mail, Coutu realized the best way to tell the world of her daughter's work in Africa. The result is Souvenirs de Nancy, a chronological look at the experience of the Peace Corps volunteer as told through her journal entries and letters to family members.

"As I was reading her journal, it dawned on me that she was planning to write a book about her experience," Connie Coutu said. "It took 4½ years for me to put it all together. But as I was doing it, Nancy was right there beside me."

The self-published book begins in August 1994, as Nancy Coutu boards a plane to Africa. It ends with details of the countless memorials erected from Madagascar to New Hampshire in honor of the volunteer's work. Seeing the book in print brings tears to Coutu's eyes.

"The book makes me happy and sad," she said. "When you lose a child, you never get over that. But it feels absolutely wonderful to share Nancy's story with other people this way."

Coutu, who moved to Osceola County from Hudson, N.H., 12 years ago, hopes to see Souvenirs de Nancy in Orlando bookstores before Thanksgiving. On Nov. 9, she will unveil the book at Kissimmee's Waldenbooks. Coutu spent two months promoting the book in New Hampshire, where her daughter was raised and went to college.

Coutu fronted $10,000 to publish the book, but sales in New Hampshire already have generated $3,500. Swanee Ballman, president of Jawbone Publishing, Kissimmee-based publishers with 40 other titles, said she expects similar success in Central Florida.

"I believe this book is going to make it to the top," said Ballman, who agreed to promote Coutu's book without reading any of the manuscript. "It's a personal story that needs to be told."

While she's happy that scores of strangers will read the book and get to know her daughter, Coutu said she wants the book to do more than honor her daughter's memory. She hopes the book will bring attention to the safety conditions involved in work overseas.

"This book should be handed to every person contemplating the Peace Corps or missionary work," Coutu said. "It will show them that they can never let their guard down. It only takes one or two people not to like you, and your life is danger."

Although any volunteer death is a huge blow to the Peace Corps, the numbers need to be kept in perspective, spokeswoman Barbara Daly said. Of 165,000 Peace Corps volunteers in the past 40 years, 256 have died, most from automobile accidents, Daly said.

Coutu maintains her daughter didn't expect to be isolated in the small village, without any means of outside communication. Coutu herself felt the stigma of being an outsider when she visited Madagascar, an island in the Indian Ocean near the African continent, in July 1995.

"I was scared to death," Coutu recalls. "It's very strange being in a land where you stand out like a sore thumb. But Nancy was so extremely happy and well-loved. She was an adult and I couldn't dictate what I wanted for her life."

Coutu thanks the people of Bereketa for all they have done to memorialize her daughter. In addition to naming a new hospital after her, the village erected a permanent statue outside the spot where she was killed. A plaque reads, "Like a queen bee, you died and left honey."

Nancy Coutu was posthumously knighted in Madagascar, one of the first women or foreigners ever to receive that tribute. Her work lives on in Bereketa, which has a new school, cleaner roads and a greater understanding of the outside world as a result of her efforts.

In trying to come up with a title for the book, Coutu only had to glance over one of the journal entries.

"I was thinking as I was working, how everywhere I've been I leave a pretty scene behind," Nancy Coutu wrote on the day she finished rebuilding the school. "It's a neat feeling. The villagers will call the school 'Souvenirs de Nancy' when I'm gone, which is so true. It's nice to know -- a mark of my beauty will be left here, too."

This story has been posted in the following forums: : Headlines; Safety and Security of Volunteers; COS - Madagascar

This message is for Connie Coutu if she reads this. I am doing research on the Peace Corp due to the fact that I am interested in joining. I came across this article and am looking for a copy of the book because I am very interested on finding out what it says. I would also like to talk to you personally if there is a way to arrange it thru email or letter. I have some questions to ask that I don't feel should be posted on the internet.

I have thought of you and Lorraine often through the years. It doesn't seem possible that it has been 68 years. I was shocked to read about Nancy. Would like to say more but this is a public domain. Please say hi to Lorraine for me.