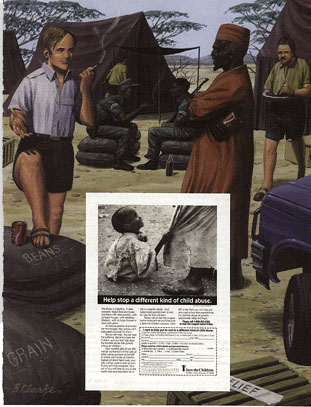 Read and comment on this story from Worldview which provides an overview of the debate on Emergency Relief Aid and whether it does more harm than good.

Many RPCVs go to work for USAID or NGOs involved in Emergency Releif Aid when they leave the Peace Corps. One such volunteer, Kenya RPCV Michael Maren has been an outspoken critic of such programs.

"The massive volumes of emergency aid over the last ten years have certainly reduced suffering and prevented many deaths across Africa. However, it is now finally being recognised that the way that this emergency aid is provided is only worsening the s ituation."

Relief aid. Can't survive without it; can't live with it! Many Africans find themselves trapped in this terrible paradox. International relief assistance has proven to be indispensable in meeting emergency food and health needs in va rious crises in Africa in the recent past. The famine in the Horn of Africa in 1984-85 and the refugee crisis in Rwanda in the mid-1990s are probably the two examples with the highest public profile.

On the other side, however, emergency aid has come under fire from critics who question its usefulness, its impact, its perpetuation of negative images of Africans as helpless beggars, and its long-term consequences.

The lead article in the September 1994 issue of IFAD Update, the bulletin of the International Fund for Agricultural Development of the United Nations, put the question in stark terms: "Faced with disasters yet again in areas like the Horn of Af rica, the question is inevitably being asked if it really makes sense to engage in round after round of emergency assistance. In effect, the question is whether, in a certain sense, disaster is normal, and whether emergency response really makes any long- term difference" ("Beyond Emergency Relief," p. 1).

Critics such as aid worker/journalist Michael Maren, author of The Road to Hell: The Ravaging Effects of Foreign Aid and International Charity (Maren 1997) and British journalist Graham Hancock, author of Lords of Poverty (Hancock 1989), call for a total cut-off of food aid and other foreign assistance, arguing that it is the donor countries--and not the poor in the Third World-- who receive the most benefit from aid as it is presently structured. "Aid is not bad...because i t is sometimes misused, corrupt, or crass; rather, it is inherently bad, bad to the bone, and utterly beyond reform" (Hancock, p. 183).

The authors of Foreign Aid Reconsidered (Riddell 1987) and Does Aid Work? (Cassen 1994) acknowledge the numerous weaknesses of the international aid system, but support its continuation with proper safeguards.The resource materials in thi s chapter describe the paradox of African relief aid--with case studies of Ethiopia, Eritrea, and Sudan--and explore some alternative approaches to the delivery of emergency assistance.

David Keen's 86-page booklet, Refugees: Rationing the Right to Life. The Crisis in Emergency Relief (Keen 1992) is a good place to begin. Keen describes the macro structure of the international emergency relief system and identifies and examines "s hortcomings" in the system as it functions presently. "The quantity and quality of relief for refugees falls short of acceptable standards," Keen states at the start of his final chapter ("An Agenda for Action"). "What we have at present is an unsystemati c arrangement where the efficacy of assistance is all too often left to chance, to the vagaries of political agendas and the fluctuating availability of resources. What is needed is a system that will ensure refugees' welfare and involve them in de termining the nature of aid" (p. 69).

Another popularly accessible introduction to the relief aid dilemma is Peace, Development, and People of the Horn of Africa, a report written by John Prendergast and co-published by the Bread for the World Institute on Hunger and Development and the Center of Concern (1992). Prendergast focuses on the distribution of relief aid in war-torn areas in the Horn of Africa region: Sudan, Ethiopia, Eritrea, and Somalia and Somaliland.

In Beyond Charity: International Cooperation and the Global Refugee Crisis (Loescher 1994), Professor Gil Loescher (international relations, University of Notre Dame) traces the growth of "the international refugee regime" from 1921, when the Le ague of Nations appointed the first High Commissioner for Refugees, to the post-cold war period of the late 1980s and early 1990s. Loescher's concern is the efficacy of the refugee relief system in its broadest representations (with Africa covered among m any other world regions), but his study provides important background for an understanding of the strengths and weaknesses of relief aid in particular situations.

British academic Peter Burnell (lecturer in politics, University of Warwick) narrows the focus of the international relief establishment to British voluntary agencies for overseas aid and development (e.g., Oxfam, Christian Aid, War on Want) in his boo k Charity, Politics and the Third World (1991). Burnell describes the origins and activities of these agencies (at home and abroad) and examines the turbulent international waters in which these charitable institutions swim. "[The cases of] Ethiopi a and Sudan, Biafra and Cambodia," Burnell points out, "all demonstrate the willingness of warring parties to make use of hunger and food as instruments of war. In this situation the charities are faced with dilemmas which they cannot possibly resolve to everyone's satisfaction. They risk being damned if they try to intervene and they will be damned if they decide to hold back" (p. 201).

In the early 1990s USA for Africa, a U.S.-based organization that raised and disbursed $49 million in financial assistance for Africa programs during the years from 1985 through 1989, commissioned Africa specialists Michael Scott and Mutombo Mpanya to conduct a thorough-going independent review of USA for Africa operations. The resulting product, We Are the World: An Evaluation of Pop Aid for Africa (Scott and Mpanya 1994), will encourage readers at all levels of interest and expertise to re-exa mine accepted truths about the international emergency relief system.

The relief assistance experiences of eight recipient countries (four of them African) and eight donor nations are examined in World Food Aid: Experiences of Recipients and Donors (Shaw and Clay 1993). Editors John Shaw and Edward Clay focus on food aid--"a controversial form of development assistance," in the words of James Ingram, executive director of the World Food Programme (Rome). Ingram observes that "both donor and recipient governments have displayed an ambivalent attitude to [food aid] that has undermined its usefulness" (see Foreword, p. ix).

Agricultural economist Vernon Ruttan uses the topic of food aid as the binding force for the twelve essays he brings together in Why Food Aid? (Ruttan 1993). Contributors trace the development of U.S. government food aid policies and programs, h ighlighting their humanitarian, political, and (self-serving) commercial features. Africa's experiences with U.S. food aid are described throughout the book.

Tomasevski, a consultant researcher with the Danish Center of Human Rights, argues in her book that the observance of human rights law and related standards is a rational basis for working out an overall development assistance policy and implementing i ndividual development projects.

The ten essays in Robert Gorman's collection Refugee Aid and Development examine the "twin predicaments" of economic underdevelopment and of refugee movements, making the point that "they are in a very real sense linked and that neither can be f ully resolved without taking into account the other" (p. 1).

This same theme is developed in a discussion paper published in August 1994 by the Institute of Development Studies at the University of Sussex (Brighton): Linking Relief and Development (Ross et al. 1994).

Famine relief in Ethiopia and Eritrea during the period 1983-86 is the subject of numerous critical studies. See

Background reading on causes of and international responses to famine in the Horn of Africa region may be found in Environment, Famine, and Politics in Ethiopia: A View from the Village (Dejene 1990) and Fau: Portrait of an Ethiopian Famine (Waller 1990). The latter chronicles the impact of the famine in the mid-1980s on refugees from Ethiopia who settled in a relief camp near the Sudanese town of El Fau, while the former is a detailed field study of environmental degradation in one regio n of northeastern Ethiopia (Wollo) and an analysis of the relationship between famine and the environment.

# The 1980s, John Prendergast writes, "were a decade of famine, war, and death for Sudan." Drought was the key element in the famine of 1984-86 and conflict was to blame for the famine that wracked southern Sudan from 1988 to 1991. The causes and extent of the two famines in Sudan--and the efforts of outsiders to be of assistance--are analyzed in Prendergast's booklet Peace, Development, and People of the Horn of Africa (Prendergast 1992) as well as in books such as The Benefits of Famine: A Political Economy of Famine and Relief in Southwestern Sudan, 1983-1989 (Keen 1994);
# The Challenges of Famine Relief: Emergency Operations in the Sudan (Deng and Minear 1992); and
# Food and Power in Sudan: A Critique of Humanitarianism (African Rights 1997).

James Morton, a development economist with seven years of field experience in the Darfur region of Sudan, puts Sudan at the center of his hard-hitting critique of development assistance to Africa. See The Poverty of Nations: The Aid Dilemma at the H eart of Africa (Morton 1994).

In Requiem for the Sudan: War, Drought and Disaster Relief on the Nile (Burr and Collins 1995), authors J. Millard Burr and Robert O. Collins argue that attempts by international and humanitarian governments to aid the victims of Sudan's civil w ar have been thwarted by bureaucratic infighting, corruption, greed, and ineptitude.

Joseph Hanlon, author of many books on southern Africa, mounts a withering attack on the policies and programs of the international aid establishment (using Mozambique as a case study) in Mozambique: Who Calls the Shots? (1991). Hanlon charges that a "conspiracy of interests" (involving "wealthy aid agencies," the World Bank, well-meaning nongovernmental organizations, and others) has "forced" Mozambique to accept foreign aid and, in the process, is "recolonizing" the former Portuguese colony.

"For most people, the mention of the Third World, Africa, or aid conjures up quite specific and particular images. Starving children, refugees, wars, food aid, volunteers, etc. Images of destruction, helplessness and dependency that very often serve to reinforce racial stereotypes of the Third World, rather than challenge and dispel them."
"The two papers contained in this publication [Emergency Aid and the Refugee] spell out many of the difficulties which arise in the provision of emergency aid and highlight the artificial distinction which often exists between what is termed 'devel opment assistance' and 'emergency aid'. In doing so, they are not calling for a cessation of emergency assistance, rather, they advocate a closer, more critical examination of current provision, with a view to improving it."
--Emergency Aid and the Refugee (Irish Mozambique Solidarity, 1993)

This story has been posted in the following forums: : Headlines; Special Interests - Development

Dear sir/madam,
Mine is an inquery on how i can apply for the scholarship from your organisation.
Iam a ugandan aged 28 possesing a degree in commerce with an upper second and a diploma in business studies.
Thanking you in anticipation.
yoursfaithfully,
AYESIGYERUHANGA BYLON.