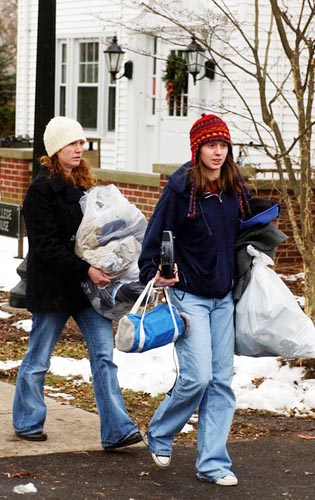 Read and comment on this story from The Cincinnati Enquirer on PNG RPCV Brain Walker who was murdered in Knifley, Kentucky. Brian Walker, 54, originally from Iowa, started a volunteer fire department in the town 16 years ago, just two years after he moved the family to Kentucky. He settled on a 218-acre farm in a house that he built himself after returning from a Peace Corps tour in Papua, New Guinea. Police are searching for his killer who is thought to be his son Blake P. Walker. Read the story at:

Student feared target after brother is suspected of shooting their parents*


Student feared target after brother is suspected of shooting their parents

HANOVER, Ind. - College students hastily packed up three days early for Christmas break Tuesday as police searched for a Kentucky teen thought to have killed his parents and whose next target might be his brother - a Hanover College sophomore.

Hanover College, 70 miles southwest of Cincinnati, began sending students home at 9 a.m. Tuesday. The concern was that Blake P. Walker, 16, of Knifley, Ky., who police believe shot his parents to death Sunday night, would come to the idyllic riverside campus in search of his brother, Manning Walker, a Hanover philosophy and anthropology major.

"The rumors of a gunman started yesterday," said Grant Saunders, of Symmes Township, a senior double majoring in business and economics at Hanover. "By last night, the doors to the library were locked. By this morning, exams were canceled."

The parents, Brian Walker and Barbara Peterson, were found Monday after two of Blake Walker's Adair County High School classmates contacted police in the Kentucky town about 100 miles from the Hanover campus.

Investigators believe Blake Walker acted alone in the shooting, but have no idea why.

"Right now we don't have any reason why," Kentucky State Police spokesman Dwaine Barnett said. "Everybody we talked to in the family seemed to think everything was fine."

Manning Walker was informed of his parents' death by college staff and rushed from campus housing, as officials feared that his life, too, was in danger. He stayed with a faculty member Monday night, officials said, and is now in hiding under police guard.

By noon Tuesday, the campus began to resemble a ghost town, said Alan Clark, spokesman for the school. State and local police stood guard at the school's entrances as a few remaining stragglers stayed behind.

"There is no word to describe what has happened," said Sean Smith, 21, of Springboro, who stayed late to write a term paper. "You feel for the guy. Trying to imagine what he is going through is hard to do. We are all getting ready to go home early, but he doesn't have anyone to go home to."

"Since this is still an evolving incident with lots of unanswered questions, we decided to err on the side of caution," Mr. Clark said. "Better be safe than sorry. I think the parents would agree with that, too."

Amy Arnold, 21, of Laramie, Wyo., is an acquaintance of Manning Walker.

"We are getting to go home early, but the atmosphere hasn't been jovial," said Miss Arnold, a senior. "A classmate's parents died. What a horrible thought. My housemates prayed for the family this morning."

Residents of Knifley, population 150-200, also tried to deal with the initial shock of the killings.

Community leaders said the loss is especially difficult because the entire family was active in the community.

The father, Brian Walker, 54, originally from Iowa, started a volunteer fire department in the town 16 years ago, just two years after he moved the family to Kentucky. He settled on a 218-acre farm in a house that he built himself after returning from a Peace Corps tour in Papua, New Guinea.

Mrs. Peterson, 55, who was originally from New Jersey, was a psychology instructor at Lindsey Wilson College in Columbia, about 15 miles north of Knifley.

School officials, who have had the high school on lockdown since Monday morning, said Blake Walker was a good student and involved in social activities.

Blake Walker was last seen driving a maroon, four-door 2000 Saturn with Kentucky license plate 180 FVL. He was described as white, 5 feet 8 inches tall and weighing 140 pounds. He has brown hair and brown eyes.

Anyone who knows Blake Walker's whereabouts is asked to call Kentucky State Police at (800) 222-5555 or the nearest law-enforcement agency.

No funeral arrangements have been made for the couple.

This story has been posted in the following forums: : Headlines; COS - PNG

As PCVs in PNG, Brian was the key trainer for our Group in 1997. His cultural insight and worldwide experience were tremendous. Although I have not seen him since then, he will be missed.

I currently live in PNG and had the good fortune to meet Brian and Barbara in 1981/1982. My husband and I have always kept in touch with the family and have on occasions been able to catch up with Brian again in Port Moresby and also in Dili East Timor (2000). We had the opportunity of staying with the family at their home in Knifley Kentucky (1996) and no-one could have made us feel anymore welcome than they did. They were a loving couple who were gave their lives in helping those not as fortunate as others. What has happened is a total tragedy and something my husband and I cannot understand nor I would think a lot of other people. Manning and Blake were loving children who had been taught to help others in the world, just like their parents - they were models of their parents. Our hearts go out to Manning, but also to Blake who no doubt is now experiencing the most tumultuos time in his life - all because of what I can only see as a short time of insanity, for a reason we will never know. Brian and Barbara will be greatly missed.

I just did a google search looking for my old friend Brian Walker. I last saw him in about 1980 when he visited me while I was in graduate school in Austin, Texas. He and Barbara had no children at that time.

I met Brian while working with troubled teens in a Houston mental health program. We took the kids out on wilderness survival trips for a month at a time.

Brian woke me up to life. He was an amazing man. I knew Barbara also and held her in great esteem. I remember once listening with her to the "Baba Ram Das" albums after Brian left for New Guinea.
It was about 1975. Brian introduced me to the music of Tom Rush.

Brian also worked for CARE in Lahore, Pakistan, in the Punjab region, which the article didn't mention.

Manning, if you read these notes, feel free to e-mail me at MECHKAR@msn.com. I can't begin to understand the pain you must be feeling right now, but I certainly know you're suffering. I'd like to meet you, talk with you about your parents, find out about your life.

I am so shocked and saddened to hear of this. I recently wrote an article on my PC experience that will be published soon in the Canadian magazine, "Maisonneuve." In it, I praise Brian's forthrightness in addressing the dangers of living in PNG. I decided to look for him on the internet, and came across this news. My deepest sympathy goes out to his family and friends.
Norene Kelly

This is terrible news. Brian was an amazing instructor who emphasized great integrity in the transition of PCV's into the complex world of PNG. He was one of the best teachers I've worked with in any setting. What a loss.

hello to all that read this i have been looking for a brian walker for yrs now that would have been from iowa he would be my older bother if anyone reading this can help me find out if this man that was loved bye so many was him plz e-mail me dotty_may69@yahoo.com