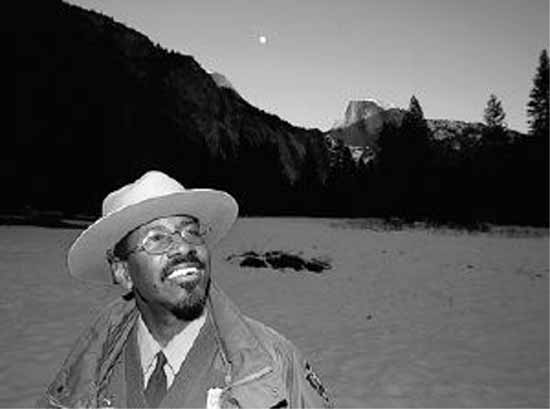 Caption: Ranger Shelton Johnson walks through Yosemite National Park in California, with the moon rising over Half Dome in the background. While leading tours of the park, Johnson portrays a Buffalo Soldier, black troops who patrolled the park in its infancy.

Read and comment on this story from The Olympian on Liberia RPCV Shelton Johnson who discovers hisotory inYosemite National Park. Born in Detroit, he had never seen see mountains until he spent two years in Africa as a Peace Corps volunteer after college. Then he returned home, entered a graduate school poetry-writing program and spent a summer washing dishes in Yellowstone National Park. It was there that the mountains of the West claimed him and he couldn't leave. Read the story at:

The Associated Press
THE ASSOCIATED PRESS

YOSEMITE NATIONAL PARK, Calif. -- If the soaring trees could speak, rocks could talk and trails could trace their origins, they surely would tell of the forgotten black soldiers who once guarded this park.

Instead, the words come from a black poet-turned-ranger, a Detroit transplant who found his calling in the mountains and discovered that his cultural roots ran through the nation's oldest parks.

Since finding this little-known chapter of history, Shelton Johnson has donned the uniform of the Buffalo Soldier, one of the black troops who patrolled Yosemite National Park in its infancy. He has used their experiences to lure minorities to the park and perhaps recruit more rangers like himself.

"My long-term goal is to have a family reunion right here," Johnson said as a full moon rose over Half Dome in the background. "The descendants of all the soldiers -- and there are thousands of them -- have no idea that their great-grandfather or grandfather was essentially a park ranger before 'park ranger' was even a word."

Yosemite was established as a national park in 1890, nearly three decades before the National Park Service was created in 1916. In those intervening years, the Army ran the parks, driving out shepherds and their flocks, busting poachers, blazing trails and mapping boundaries.

During three of those years -- 1899, 1903 and 1904 -- black infantry and cavalry troops rode 14 days on horseback from the Presidio in San Francisco to spend the long California summer at Yosemite and Sequoia national parks.

Park historians have long known of the early role for black soldiers in the Sierra Nevada, but it was not widely taught.

Drawn by the mountains

As a kid in Detroit, Johnson was far removed from the natural world, which he discovered through television that transported him to exotic places through National Geographic programs.

He didn't see mountains until he spent two years in Africa as a Peace Corps volunteer after college. Then he returned home, entered a graduate school poetry-writing program and spent a summer washing dishes in Yellowstone National Park.

The mountains of the West claimed him and he couldn't leave.

On a visit that summer to Old Faithful, a friend pointed out something that was missing from the boardwalks that spread out among hot springs and geysers.

The refrain stuck in Johnson's mind and was reinforced when he left Yellowstone years later, where he was the only black ranger, to serve a short stint schooling inner-city kids in Washington, D.C.

"I remember talking to them about my experiences in Yellowstone and Grand Teton National Park, and it was like I was talking about Mars or Jupiter," he said. "It was as far-flung from their experience as if I was Neil Armstrong talking about what it felt like to be on the moon. It just frustrated me."

Johnson, 44, realized he needed a story to reach kids who had no link to the parks. It was almost by accident that he found the picture of the 24th Mounted Infantry taken in Yosemite in 1899. It was like "stumbling into your own family while traveling in a foreign country."

So he started to learn more about the Buffalo Soldiers. Johnson has created a Web site project called "Shadow Soldiers in the Range of Light" that uses historical photos, maps, a letter he penned and poems he wrote to explore the relationship between the troops and the park.

"Your names are air, unseen, yet moving around us," he writes in his letter to dead soldiers. "How can something as substantial as a column of twenty-six men riding side by side on a dusty road leave neither imprint on the ground nor sound in sky?"

It also inspired his reincarnation as Sgt. Elizy Boman, the soldier he depicts as he leads living history tours through Yosemite's granite cathedral and speaks to students about Buffalo Soldiers, the nickname given them by Plains Indians who compared their coarse hair to that of bison.

Johnson has the muster rolls of the nearly 500 black soldiers who patrolled the two parks, but he's still seeking letters they may have written or journals they kept that will shed more light on their time in the high Sierra either before shipping off to the Philippines or after returning from the Spanish-American War.

One of the contributions by the "colored" troops was an arboretum they established in 1904 near the Wawona section of the park, said Harvey Meyerson, author of "Nature's Army: When Soldiers Fought for Yosemite."

Trails led through the 75-acre refuge and 36 different kinds of trees were identified by their common and scientific names.

But like the soldiers who created it, the sanctuary was forgotten as it became swallowed by forest and ended up outside the park when boundaries were shrunk. It was rediscovered many years later after being reincorporated in the park.

"It was like discovering one of those lost Mayan civilizations. They discovered these signs in Latin all overgrown," Meyerson said. "This was one of the significant contributions, not only to Yosemite, but to the national parks as a whole."

By spreading word of the soldiers' role as early protectors of the park, Johnson hopes to attract minorities to a Park Service that aims to diversify its ranks in the West.

The Park Service's permanent work force of 17,000 is 79 percent non-Hispanic white. The figure is nearly the same in the West, but there are far fewer blacks. Nationally, blacks comprise more than 10 percent of the full-time employees; they make up a little more than 2 percent of the 3,000 employees in the Pacific West region.

"There is quite a disparity, isn't there?" said Holly Bundock, a parks spokeswoman for the region.

The parks have advertised jobs in black publications in the past six years. Sequoia and Kings Canyon national parks, which were the first national parks with a black chief, are planning to expand recruiting to job fairs and community colleges and Yosemite is sending recruiters to black colleges.

Sequoia, which will mark its centennial this year, is also creating an exhibit about Capt. Charles Young, the black Army officer who was the park's first superintendent. Plans are being made to celebrate the work of the Buffalo Soldiers this summer.

Johnson is also reaching out to potential rangers as a role model. He's appeared at events such as the Rose Bowl Parade and at schools in some of the poorer communities in the San Joaquin Valley.

Informal surveys by Transportation Involves Everyone, which was co-founded by the late former Sierra Club leader David Brower, found that large numbers of children in the valley, which is largely made up of minorities, have never been to Yosemite.

Some children living in Merced, the so-called Gateway to Yosemite, didn't even know the park existed and confused it with Lake Yosemite, a reservoir in town, said Ken Gosting, a member of the transportation group.

By telling the story of these early guardians of nature, environmentalists hope Johnson will galvanize a new generation of leaders from diverse backgrounds.

"We think there's a Laotian John Muir, and an African-American John Muir and a Hispanic John Muir," Gosting said. "We know there are environmental stars out there."

This story has been posted in the following forums: : Headlines; COS - Liberia; Special Interests - National Parks

Hello! I didn't spend two years in Liberia as a Peace Corps Volunteer as is stated in this article! I certainly served in Liberia with the Peace Corps, but I became very sick early on, and left early on.

I served in Liberia, West Africa for just under 3 months. I have very fond memories of my time in the Peace Corps, and continue to think of it as a vital, indeed, indispensable part of American goodwill overseas, and I have a great deal of respect for those individuals who were able to fulfill their two year committment, but due to health concerns I was not.

My commitment to understanding between the various cultures of the world is unwavering, and I'll always remember the Peace Corps as the organization that first allowed me to test my resolve to help make the world a better place for everyone.

A few years ago I was lucky enough to be selected as part of an official National Park Service delegation to mainland China. Our mission was to assess the national park system of China. The experiences I gained in my brief tenure in Liberia were invaluable.

Today I find myself doing similar work right here in Yosemite. There are cultural barriers which surround our wilderness parks as well, and it's imperative that the beauty and the idea of national parks continue to forge bridges between all citizens and all lands that are held in trust for everyone.

Even though I am stateside, I still find that I am far removed from my own culture. Here, issues of cultural diversity find a confluence with the challenges of biological diversity.

There are hundreds of employees here in Yosemite, but I'm one of only two African-American rangers in one of the greatest national parks in the world. Millions of African-Americans live in California, but you'd never know it if you only visited the wild sanctuaries, deserts, and mountains of California.

You don't have to travel overseas to find an environment where you stand out as an anomaly. Sound familiar?

Now, I don't want this to sound like any kind of hardship! I'm very lucky to live in such an exquisite place, but I can't ignore the relative absence of people of color from national parks like Yosemite. Finding this Buffalo Soldier history in the Sierra provides me with an opportunity to forge a bridge between Yosemite and African-Americans.

Although I'm a park ranger, the work that I do is not all that different from being a diplomat , or a Peace Corps Volunteer, in that I'm making connections that otherwise would never be made.

Thanks again! I just wanted to send this message to clear up a few things, and I really appreciate the time you've taken to read this!