India RPCV Tommy Bobo says "I was 19 when I joined the Peace Corps, young and fancy-free. I thought I could change the world and I did the best I could to do that" 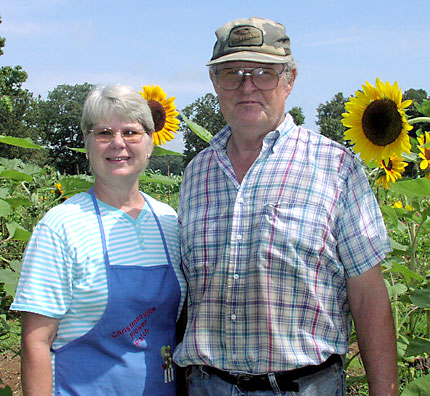 India RPCV Tommy Bobo says "I was 19 when I joined the Peace Corps, young and fancy-free. I thought I could change the world and I did the best I could to do that"

There are two ways to reap the benefits of the Christmasville Flower Patch, a unique flower and vegetable establishment owned and operated by Tommy and Martha Bobo. They harvest three times a week to provide in bountiful measure flowers, herbs - whatever is in season - at the flea market in Huntingdon on Tuesdays and at Jackson's farmers' market Thursdays and Saturdays.

But perhaps the best experience is strolling first-hand through the grass-carpeted medians of colorful flowerbeds through which butterflies meander in pursuit of sweet nectar. It's a journey unlike that encountered in most greenhouse and gardening enterprises. Cultivated almost completely without the aid of chemicals (only post-emergence herbicide was used on non-edibles) the gardens are fertilized for the most part with barnyard manure and compost accumulated onsite in bins that serve as catch basins for table scraps, old straw, grass clippings... "Anything we can get," say the Bobos.

Instead of pesticides, the Flower Patch boasts chicken and guineas that prowl the grounds, leisurely pecking through the grass for unseen bug treats. The birds, new this year, have created a tick-free environment in contrast with last year. And most recently, Tommy added ducklings to the mixture, raising them in a recycled baby crib reinforced with chicken wire.

"I knew we were going to come home with ducks when we went to market; there was no doubt in my mind," declares Martha, smiling. The week before Tommy, relaxing at the end of the day in peaceful contemplation of the birds foraging at the edge of the woods, had mused, "I think we need two or three little ducklings to go with them chickens and guineas."

In its second year, the Bobos refer to the gardens variously as "an experiment" and "a work in progress." In addition to the main garden, a smaller garden of perennials lies across the gently rolling fields, and an herb garden, edged and terraced in wood with thyme slowly creeping to create ground cover around its periphery, sits atop the next hill, below which, circling back toward the main area of garden and barn, another garden produces more herbs, melons and florals.

Perhaps unable to resist, nature supplies its own additions to the project with wild mountain mint and black-eyed susans growing along a path through the woods where an experiment in raising shitake mushrooms in rows of upright post-sized logs has ended for the year.

Back at the barn, Tommy and Martha take pride in revealing the "Green Acres" aspect of the operation that is without electricity or running water. At the rear of the structure a gutter collects runoff from the roof, filling barrels and buckets and tubs in a plentiful supply of water for irrigation.

And there one can see as well the "contraption" Tommy devised to lay out the four-feet beds the couple says "makes it easy to harvest and a pain to weed": The long wooden tool features a "T" at the bottom into which four cotton picker spindles set a foot apart drag through plowed earth to mark the rows for planting. Needless to say, the willing mules pulling the double-handled contraption are none other than Tommy and Martha, who agree that, this year, their efforts at expanding the operation may have exceeded what they alone can handle.

Yet the land itself is in their blood, adjoining the farm that has been in the Ford family - Martha's ancestors - for over 100 years. It's just one more adventure for the family that was, in essence, founded on adventure.

Martha was a student in junior high the first time she saw Gibson County born-and-raised Tommy in 1967. Home from the Peace Corps, he was in Trezevant at the home of his first cousin, Danny Bobo, who was married to Martha's sister, Janice. Clean-cut but wearing sandals, Tommy's appearance left Martha aghast. He was a "hippie", she decided, writing him off as too otherworldly.

But in fact, small town values had proved valuable to the youthful idealist intent on making a difference. "I was 19 when I joined the Peace Corps, young and fancy-free. I thought I could change the world and I did the best I could to do that," he says.

After two years in India, living in the countryside among the people he taught modern methods of poultry production, 22-year-old Tommy had been accepted to the University of Alaska. The draft board had other ideas, however, and the prospect of being drafted took Tommy to his nearest recruiter. After almost a year of training as a helicopter pilot, Tommy was on his way to Vietnam where, as a warrant officer, he piloted helicopters that provided cover for gunships.

By the time he returned in 1971, Martha had grown up, graduated from Trezevant High School, and, after attending West Tennessee Business College, was working as a secretary for Roy Towater at the Farm Bureau office. Tommy was staying with Danny and Janice while getting his bearings.

"I blame all this on Danny," Tommy laughs.

He called Martha, ostensibly to talk about Farm Bureau insurance, when she advised him she didn't discuss business after hours.

"Well, maybe we could go to a movie or something," he countered. That worked.

"After I got her interested I loaded up everything in the world I owned and went to Alaska," he said, admitting soon enough that he returned eight months later simply because he missed her.

This time when he returned, he wasn't the clean-cut, sandaled hippie she had abhorred in her younger years. It was a longhaired, full-bearded wild man that greeted her on the evening of October 31, 1972, and she welcomed him with open arms.

The couple married May 5 and moved to Jackson where he worked as an insurance adjuster for Farm Bureau for 15 years, turning down a chance to work as a pilot in Alaska.

Always interested in nature and science, he realized there was neither nature nor science in his career. With two years of college under his belt when he'd joined the Peace Corps, he returned to the University of Tennessee at Martin and, 25 years after he'd begun, earned his degree in geology. He later received his master's degree from Idaho State University in Pocatello.

Martha worked at the university as a transcript evaluator and Tommy worked first in a nuclear engineering lab in the oversight of processing spent nuclear fuel from submarines and then as an environmentalist with the Shoshone-Bannock Native American tribes overseeing Department of Energy nuclear programs impacting their lands.

The couple's plans in 1999 were to spend their retirement traveling. With oldest son Alan a successful businessman in Pullman, Washington and Ryan a teacher and coach in Napa, Idaho, Tommy and Martha took their travel trailer and headed north through Canada to Alaska, where they wintered in a rented chalet.

"We enjoyed living in Seward," says Martha, recalling good libraries, moose and bear wandering around, and picking blueberries by the bucket full while Tommy harvested wild mushrooms. "We got to know the people in town when tourists left and cruise ships stopped coming in."

Nine months into their adventure they came back to West Tennessee and, a year later, The Christmasville Flower Patch took form.

In addition to well-known varieties of flowers and vegetables, the Bobos enjoy presenting the public with unique items like pink-eyed purple hull peas, red okra, Mexican sunflowers, and green zinnias, gladiolus (when available) and bells of Ireland. Among their herbs are chocolate mint and stevia, its leaves 300 times sweeter than sugar. In the fall, broom straw and Indian corn will provide new options for decorating and bouquets.

Bin after bin of fresh cut flowers and more await shoppers at Huntingdon and Jackson's establishments. But for a really good time, call the Christmasville Flower Patch at 731-352-2679.

This story has been posted in the following forums: : Headlines; COS - India; Farming; Flowers