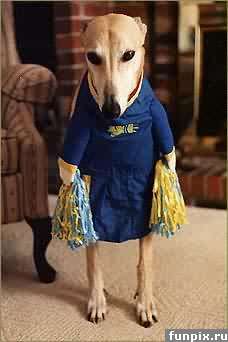 They say there is no fury like that of a woman scorned. Well, that may be true. But I am here to tell you there is fury among dog owners when they are overlooked.

You see, Shirley, I wrote a column Sunday about the names people choose for their dogs here in Grand Forks. I skipped around and picked out names at random to illustrate the variety. Well, I have been hearing from dog owners this week.

Kristi Whiteside sent a lighthearted e-mail saying she read about dogs with great anticipation. And she didn't see the name of Morocco on my list. Morocco is No. 17 in the registry at the police station. Kristi doesn't say Morocco is a mixed breed or for heaven's sake, a mutt. Instead she describes the dog as a spaniel-schipperke-poodle mix. My apologies to Morroco.

Then there's another dog named Chapin (sounds like Cha-peen), and he came to Grand Forks with Cory and Angie Floden. He holds license No. 25. When people ask what kind of a dog Chapin is, the Flodens say, "An alien." The dog is no specific breed, and Cory Floden likes to think of him as a descendant of a long line of Mayan dogs. He's tall and lanky and weighs about 40 pounds. He's quite capable of catching adult cottontail rabbits. The Flodens got Chapin from a friend in a small village in Guatemala, when they were in the Peace Corps.

Floden is a graduate student in the biology department at UND. He likes the ordinances in Grand Forks requiring pets to be licensed and on a leash. Even more, he thinks there is a need for an increasing awareness of etiquette. Too many owners let their pets urinate wherever the animal chooses, he says. And many home owners don't want urine stains on their fences or urine on young trees, shrubs and flowers.

He is so right about that, Shirley. I know pets aren't allowed at Tucson Estates, so you probably don't even think about them using your yard as a latrine.

Dogs are a diversion from all of the cares that surround us. At times, the pressure of impending war and a shaky economy is enough to get a person down. That's why I especially enjoyed an e-mail that came to me this week. It asked, "Do you ever wonder what your dog really does when you let it out?" Then it shows an animated picture of a dog out behind its house smoking a cigarette.

Well, we need a little levity in our lives, Shirley. I hope you are finding something to smile about in Arizona.

Love from your sister Marilyn, watching squirrels frolic on the roof of the Kurtyka house across the fence.
Reach Marilyn Hagerty at mhagerty@gfherald.com or telephone 772-1055 or 780-1124.

This story has been posted in the following forums: : Headlines; COS - Guatemala; Dogs; Aliens; Humor