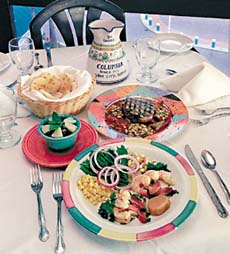 Technicolor Flavors
The hot peppers and flaming colors of Andina deliver a Peruvian education in the Pearl.

Carlos Kalmar comes from Uruguay, three countries away from Peru across the narrow handle of South America, but he knows a decent Peruvian chicharrón when he sees one. So when the new conductor of the Oregon Symphony took out his violin and played a few tunes at Andina, the new Peruvian restaurant in the Pearl, it brought some needed brightness to my lunch.

I had waited nearly an hour for my food that day, but Kalmar thawed my increasingly hypothermic mood. He played an impromptu duet with Tony Woodcock, the outgoing president of the Symphony, and it was like hearing Von Karajan play gypsy fiddle in a weinstube.

Service at Andina blows hot and cold. One night our server was a smart and sassy American woman who spoke brilliant Spanish and knew her Andean cuisine. Dishes arrived briskly. At other times, service was well-intentioned but moved glacially.

When dishes do arrive, they display sun-splashed colors that meld beautifully with the dining room of terra-cotta hues punctuated by the blues, yellows and flame oranges of the napkins. Andina, which means "from the Andes," boasts a pretty bar on one side of a broad, open space, and a vivid polychrome dining room on the other side.

Some of the dishes served here are authentic versions of Lima street food, such as cold pastry cake filled with octopus and ink-tinted potatoes ($6.50); or skewered grilled beef hearts, yuca (cassava), and an incendiary Creole salsa of onions, lemons and chilies ($5.50). Other dishes are what the restaurant calls novoandina cuisine, where native ingredients are used in a blend of vernacular and international cooking.

The cebiches ($6-$7.50), centerpieces of both the lunch and dinner menus, are bracingly fresh. The shellfish is marinated for hours in a sauce of lime juice, bitter oranges, cilantro, onions, hot peppers and sea salt, and the dish is enhanced by yam slices and crispy kernels of baked corn. A smoother, richer version blends green mangoes and shrimp ($7.50), and even vegetarians may enjoy a cebiche of artichokes, mushrooms and pisole ($5.50), a kind of citrus and chili-infused salad. Each version sparkles with a tingling interaction of sour and salty, smooth and crunchy, piquant and refreshing.

Emmanuel Piqueras Villaran, the chef from Lima, has created an adventurous menu. There are wonderful chicharróns of shrimp rolled in quinoa and fried to a crunch to be bathed with a hot sauce ($6.50), finger food expressing both mountain grain and coastal seafood. There's a martini glass filled as you've never dreamed--with cubed octopus topped by an "olive cloud," a sort of frothy tapenade or chiffonade ($8), perhaps inspired by Villaran's stint in Spain, where foam cooking has been the rage.

Meat triumphs here. The single best dish may be a brace of lamb chops ($20) marinated in Pisco, a Peruvian white-grape brandy, and served with delicious fried yellow potato and cheese rolls, corn and fava beans. And a flat-iron steak ($15.50) shines, doused with onions and a blazing native pepper known as ají, which isn't for the tender-palated. But Villaran's heart is in the sea, and he produces a splendid trout stuffed with ham and a raisin sauce ($18), and fine scallops enlivened by the ubiquitous hot-pepper sauce ($7).

Among the desserts, the most exciting is a refreshing Andean fruit pudding called Mazamorra ($3), based on purple corn boiled with cinnamon, sugar and such interesting fruits as cherimoya; its color is deep purple, and it has a delicate flowery, lemony taste. But there are also mundane sweets that might not induce you to cross the Andes for a taste, such as the mousse of mango ($3).

Each dish comes with surprises, most of them rewarding. If you ask questions, you can learn how the country's cultural melange, which includes Indian, European, African and Asian influences, has enriched native foods like potatoes and corn.

It's a treat to have this bold cooking in town, and to learn about a cuisine that's been a stranger too long.

This story has been posted in the following forums: : Headlines; COS - Peru; Cooking