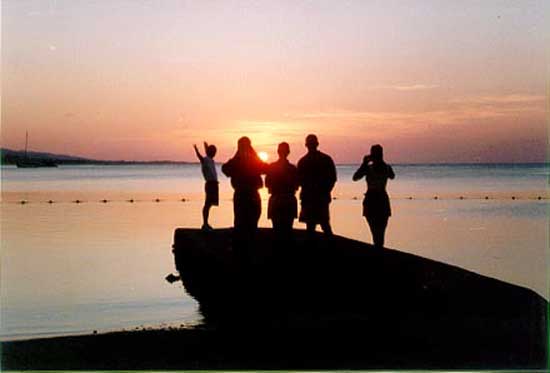 Read and comment on this story from the Oakland Tribune on Barbados RPCV Lynn Fisher who works with Operation MOM to support active military personnel. Fisher's gaze lingers over a photo of her son, and a rush of pride comes over her. "I'm proud of Joseph, and as a loyal American, I'm proud to allow him to defend what we believe in. When my son comes home, I'm going to have my friend create a big banner and my old Peace Corps friends will greet him when he gets in." Read the story at:


FORMER PEACE Corps volunteer Lynne Fisher thought she closed the door on her world travels with the corps many years ago.

Content to just settle down and raise a family, the Alamedan raised two sons and a daughter as a single mom. But her youngest, Joseph, was destined to follow in her footsteps.

"On his 18th birthday he went down and joined the Marines," she said sadly. "But anyone who knows us should not be surprised. My father was a co-pilot during the invasion of Normandy, my brother was in Vietnam and at age 17, my grandfather drove a Harley delivering messages to the front in WW I. One of Joe's ancestors fought in the Civil War and his uniform is on display at the Smithsonian Institute."

"I saw my Marine in January, just before he went back to Camp Pendleton. After our visit, I watched him drive away and then I started crying. After all, I may never see him again," she said regretfully. "I realize that it could happen. Something is going to happen to somebody's child. I pray it's not mine.

"I grew up in the 'boondocks' of Southwestern Penn- sylvania and attended the same high school with Joe Montana. I was so far out of the city that the only time I saw my friends was at church or school. While I was at Pittsburgh's Robert Morris University, Peace Corps recruiters came to my college. I filled out an application and later received an invitation to join the Corps."

Fisher began her Peace Corps travels on the Leeward Islands in Barbados, and later added countries like India, Guinea, Nairobi, and the Polytechnic Islamic Institute in Mombasa to her travels. She taught business courses to well-to-do locals in several countries.

"Once I left Mombasa, I went to India, Karachi, and Bombay and then I went up to Delhi and Katmandu. I later went to Calcutta. I just liked to travel," she said. "When I was a little kid, I was always looking at maps. I always had a globe and I was always telling everybody where I was going to go."

"Joseph has been in the Marines since 2000 and is on his second tour. He's not allowed to talk about things but it's ironic that he's tracing some of my steps when I was in that part of the world," she said.

"My son is willing to give his life for his country and that's part of the cement that binds all our mothers together. Operation MOM has brought some peace to the mothers," she said.

Fisher wonders why our local people are so divisive.

"I'd like to get more people involved supporting our children. It's distressing that local people are so cavalier about the war," she said. "It almost seems like they are trying to recreate the sixties and turn it in to just another public relations effort."

Fisher says some are ignoring the hurts mothers feel over their sons and daughters. "At the last Operation MOM meeting we started talking about our children and the tears just flowed," Fisher said. "We were all crying. I'm a strong person with a lot of support and it's great that we have a group that understands. We have a common bond. It's getting worse and worse. We hear about casualties and the shivers run up our backs."

Her resolve is fragile, and her stoicism lingers over the anxiety this war could take her son away from her. "I don't watch too much television because I'm afraid I'll see my son in a bad situation. But I'm grateful for Operation MOM. At least we can share our emotions. Each of us knows how the other feels."

In one of Joe's letters, he said there was so much sand you couldn't see the sun sometimes, Fisher recalls. He said he didn't have anything to write about, but he wanted me to know he'd be home safely this summer and not to worry. He said to tell everybody he loved them and tell Marion, (their 88-year-old neighbor), he said "hi."

Fisher's gaze lingers over a photo of her son, and a rush of pride comes over her. "I'm proud of Joseph, and as a loyal American, I'm proud to allow him to defend what we believe in. When my son comes home, I'm going to have my friend create a big banner and my old Peace Corps friends will greet him when he gets in."

Join Operation MOM in supporting our military sons and daughter. Log in on www.operationmom.org or contact Dottie at (925) 706-1736.

Longtime Alameda resident Mark Raymond Chandler can be reached at 521-8302 or by e-mail to indonesia9@alamedanet.net . More about Operation MOM

Read more about Operation MOM at:

During World War II, a group of mothers who had sons or daughters involved in the war, formed a support group. Today, military support groups are formed within their own branches. Our group, Operation: MOM was created in the same supportive spirit with two differences. The first difference is that Operation: MOM includes all family and friends of those who are active military personnel. We serve as a support group for parents, spouses, sisters, brothers, close family, and friends of those securing our freedom, whether here or afar. The second difference is Operation: MOM includes all branches of service. Operation: MOM extends this purpose to the families of those on the battlefield, in the air, on the seas and under them and those just starting out in their military training. It is important we support one another, assist one another, and meet the special needs all of us are having or soon will experience, no matter what branch of service our loved one is in.

We also provide direct support to our military personnel who are currently deployed overseas through letters of encouragement, food packages, and other necessities that will remind our troops of how much they are supported and loved. We remind them of our great appreciation for their contribution to each and everyone of us on the home front. Our military troops will face their enemies knowing we are praying for each and every one of them, and thinking of them often. We are united as Americans, one country, and for one great purpose: FREEDOM!

The income from our products will go towards serving our troops and their families. Our greatest resource is not our financial effort, but the great belief in a strong county that binds the hearts of our volunteers to reach others for the same unified purpose.

Our program, Operation: MOM was birthed by two friends, Dotty and Gloria, who each have a son in the service, who share one destiny - to serve our nation in the United States Marine Corps. Together, our immediate family members have served in the Army, Navy, Airforce and Marines during WW1, WW2, Korea, Vietnam, Desert Storm, and currently, our struggle for continued freedom in the Middle East. Both our sons are on alert for the next phase of war on terrorism. Our commitment, like yours, is steadfast in supporting our son's and our proud troops!

Operation: MOM has the support of our local Armed Forces.

How can you help?

* Tee Shirt sales help us provide financial support needed to create care packages and provide for special needs that may arise for our military personnel and their families. Buy a shirt!

* Gather names of military personnel, platoon numbers, and addresses so we may reach as many of our troops as possible.

* Become a buddy with other military families. Supporting each other is a gift!

* Spread the word about Operation: MOM

* Give us your ideas.
Click on a link below for more stories on PCOL

This story has been posted in the following forums: : Headlines; Iraq; COS - Barbados; Service

my name is sulemana raimi i am a ghanian by nationality .i am a welder by profession i want to join the peace corp. we want peace in the world.i am sure thi letter will give good recommedation and approvel i am looking fore to hear from you soon.