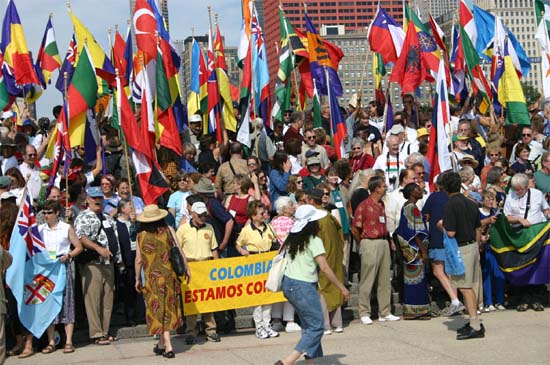 Close to 1,000 former Peace Corps volunteers from around the United States have gathered in Chicago for a weekend conference in which they are renewing their commitment to development in countries where they served.

Among the former volunteers who are here for this 25th annual conference of the National Peace Corps Association are educators, social workers and health care providers. But the gathering also includes the governor of Ohio, Robert Taft, who was a Peace Corps volunteer in Tanzania from 1963 to 1965, and governor Jim Doyle of Wisconsin, who, along with his wife, Jessica, served in Tunisia, from 1967 to 1969. Other participants include corporate executives, judges, lawyers, agricultural specialists and small business owners.

The president of the National Peace Corps Association, Kevin Quigley, said the experience these people had in their country of service forever changed them and their attitude about the rest of the world. "The National Peace Corps Association is the organization for people whose lives have been influenced by the Peace Corps experience. That is roughly 200,000 people who served in 135 countries around the world and as a consequence of living there as friends and neighbors and colleagues, they see the world differently," he said.

At the conference opening Friday, the Peace Corps organization presented the Sargent Shriver Award for Humanitarian Service to Kevin Denny, a psychiatrist from New York state who served in the African nation of Malawi from 1964 to 1967. Mr. Denny has returned to Malawi many times since and for the past 13 years has sponsored a project to help children left orphaned by the AIDS epidemic there. He said this project has counted on support mainly from other former Malawi volunteers. "Our friends of Malawi group had been continuing to organize and meet for 40 years and we had a list of 600 people who were on a mailing list for "Friends of Malawi." I had extreme confidence that the troops would rally and they have and they have supported the project in an immense way," he said.

Mr. Denny said former volunteers have contributed money, helped publicized the cause and even come to Malawi to help firsthand.