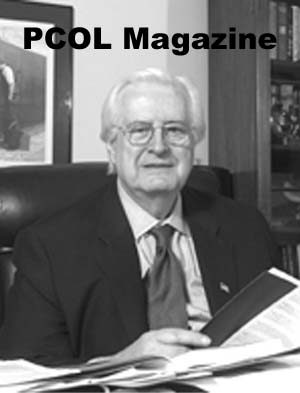 Henry Hyde was a credit to public service and to the House of Representatives," said Democratic Sen. Patrick Leahy of Vermont, chairman of the Judiciary Committee. "He practiced the old school values like civility, which help make the legislative process work. And he knew how to defuse a difficult situation with humor."

PCOL Comment: Henry Hyde did the Peace Corps a great service in 2004 by holding hearings on Safety and Security issues related to Peace Corps service and introducing legislation that would have established an Ombudsman and an independent office of the Inspector General at Peace Corps Headquarters. Henry Hyde was a friend of the Peace Corps.

WASHINGTON - Former Rep. Henry Hyde, the Illinois Republican who steered the impeachment proceedings against President Clinton and was a hero of the anti-abortion movement, died Thursday. He was 83.
ADVERTISEMENT

Mary Ann Schultz, a spokeswoman for Rush University Medical Center, said Hyde died Thursday at 2:30 a.m. CST at that hospital. She said Hyde, who underwent open-heart surgery in July, was admitted for persistent renal failure related to his cardiac condition and suffered from a fatal arrhythmia.

Hyde retired from Congress at the end of the last session. Earlier this month, President Bush presented him with the Presidential Medal of Freedom.

"During more than 30 years as a congressman, he represented the people of Illinois with character and dignity — and always stood for a strong and purposeful America," Bush said in a statement Thursday. "This fine man believed in the power of freedom, and he was a tireless champion of the weak and forgotten. He used his talents to build a more hopeful America and promote a culture of life."

House Republican leader John Boehner of Ohio said in a statement: "In his respect for the institutional integrity of the House of Representatives, Henry took second place to no one."

"Henry Hyde was a credit to public service and to the House of Representatives," said Democratic Sen. Patrick Leahy of Vermont, chairman of the Judiciary Committee. "He practiced the old school values like civility, which help make the legislative process work. And he knew how to defuse a difficult situation with humor."

The white-maned, physically imposing Hyde was a throwback to a different era, a man who was genuinely liked by his opponents for his wit, charm and fairness. But he could also infuriate them with his positions on some of the more controversial issues of the day.

He made a name for himself in 1976, just two years after his first election from the district that includes O'Hare Airport, by attaching an amendment to a spending bill banning the use of federal funds to carry out abortions.

What came to be known as the "Hyde Amendment" has since become a fixture in the annual debate over federal spending, and has served as an important marker for abortion foes seeking to discourage women from terminating pregnancies.

Hyde was also a leader in passing the ban on so-called partial birth abortions, the first federal restriction on a specific abortion procedure. "The people we pretend to defend, the powerless, those who cannot escape, who cannot rise up in the streets, these are the ones that ought to be protected by the law," he said during the 2003 debate. "The law exists to protect the weak from the strong."

Abortion was an issue that the Irish-Catholic Hyde pursued as a matter of conscience. Clinton's impeachment, by contrast, was a matter thrust upon him.

As chairman of the House Judiciary Committee, in 1998 he led House efforts to impeach Clinton for allegedly lying about his affair with White House intern Monica Lewinsky, and then in 1999 was the chief House manager in the unsuccessful bid to win a Senate conviction.

A reluctant warrior, Hyde saw his own reputation tarnished during the process when an online magazine revealed that he'd had his own affair with a married woman some 30 years before. Hyde, in his early 40s at the time of the affair, brushed it off as a "youthful indiscretion."

Hyde also had a potentially more serious brush with scandal. He was among 12 former directors and officers of the Clyde Federal Savings and Loan who were sued for gross negligence by federal regulators after the 1990 failure of the North Riverside, Ill.-based institution. That failure cost taxpayers an estimated $68 million.

Hyde, who left the S&L in 1984, insisted he engaged in no wrongdoing and was the only director who refused to contribute to an $850,000 settlement that led to the lawsuit's dismissal in 1997.

Hyde soldiered on despite the certainty that the Senate would reject the impeachment charges. "All a congressman ever gets to take with him when he leaves is the esteem of his colleagues and constituents," Hyde said in his closing argument. "And we have risked that for a principle, for our duty as we have seen it."

Hyde was born in Chicago on April 18, 1924, where he was an all-city basketball center. After serving in the Navy from 1944 to 1946, seeing combat in the Philippines, he graduated from Georgetown University in 1947 and returned to Chicago to earn a law degree from Loyola in 1949.

Raised a Democrat, he switched parties to vote for Dwight Eisenhower in 1952. He worked as a Chicago trial lawyer before winning a seat in the Illinois House in 1966 and then in the U.S. House in 1974. A conservative when the Republican Party was still dominated by moderates, Hyde gained elder statesman status when young conservatives propelled the GOP into control of the House in 1994.

But he has also on occasion parted ways with his conservative colleagues: he strongly opposed a constitutional amendment imposing term limits on members of Congress, and supported the Family and Medical Leave Act. He has also voted to ban certain types of assault weapons. In the 1990s he joined the Clinton administration in opposing the 1973 War Powers Resolution, an act restricting the president's authority to engage troops overseas that some GOP lawmakers sought to invoke to protest military operations in Haiti, Somalia and Bosnia.

In 2001, subject to term limits that House Republicans imposed on their own committee chairmen, Hyde stepped down as chairman of the highly partisan Judiciary Committee he had led since 1995 to take over the far less contentious International Relations Committee.


When this story was posted in December 2007, this was on the front page of PCOL:

This story has been posted in the following forums: : Headlines; Obituary; Friends