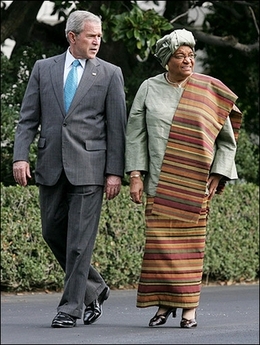 Caption: S President George W. Bush(L) walks with the President of Liberia, Ellen Johnson Sirleaf, on the South Lawn of the White House after a meeting in Washington, DC. Bush told Sirleaf Thursday that he would push the International Monetary Fund on debt relief for her country.Photo: AFP/Saul Loeb

PRESIDENT BUSH: It is such an honor to welcome back to the Oval Office the President of our friend and ally, Liberia. Madam President, thanks for coming, and thanks for your very strong spirit and your deep desire to enhance democracy and improve the lives of your people in Liberia.

We had a good discussion. I want to emphasize a couple of points that we discussed. First of all, we are committed to helping you relieve your debt. This weekend, IMF will be meeting in Washington, D.C., and it's very important for our friends in the IMF to recognize that debt relief is -- for Liberia is a part of our agenda, and I would hope that they would help you -- help you with debt relief. I think it's important. And so Secretary Paulson will be taking that message to the IMF.

Secondly, I want to thank you very much for your dedication and focus on helping the children of Liberia get a good education. You've worked extremely hard to encourage parents to send their children to school, and we want to help you, to the extent that you ask for help. The United States believes it's important that young boys and girls get a good education not only here in America, but around the world. And the President is committed to universal education in Liberia, and have made great strides since the days of your civil strife.

I also am very dedicated to helping you on malaria. Laura and I care deeply about the fact that young babies die on the continent of Africa and elsewhere needlessly. They die simply because of a mosquito bite. And so the President and I talked about our desire to put in place a malaria initiative that will save lives in Liberia. We're going to -- we'll be sending a person on the ground there pretty soon to help implement the malaria initiative, and that initiative will mean spreading nets and insecticides throughout the country so that we can see a reduction in death of young children that -- a death that we can cure.

And so, Madam President, proud to call you friend and proud to welcome you back to the Oval Office.

PRESIDENT JOHNSON SIRLEAF: Mr. President, thank you. We're so pleased to be back here.

Liberia continues to make progress, despite the many challenges we face. And this progress we owe a lot to you and to Mrs. Bush for the support we've received. The State Department, National Security Council, Treasury have all just been there for us. Whether we're -- working on debt relief, or whether we're trying to improve our educational system, or get our infrastructure fixed, we've always had a willing hand. The Ambassador has been supportive and been a real partner on the ground with us.

We were very pleased, Mr. President, that you granted the delayed enforced departure for some of our citizens who couldn't go back home because we weren't prepared to receive them with the jobs and the homes and the basic services they needed. So the 18-month reprieve you've given them gives them time to prepare themselves, and enable us to prepare to receive them at some point.

Liberia was included among three other African countries in the special education initiative, and we're very pleased about that. And we've just discussed today that you'll be behind us as we try to fight malaria. Malaria is one of the greatest killers in our country, particular among our young children. And so we'll be working to make sure that we get a program where we can have some measurable actions so we can reduce this scourge that afflicts our children.

Over all, we're just so pleased with the relationship. Liberians are very proud that you were one of the first ones that set us on this road to peace, and a road that's enabled us to get the progress we have today. We are committed to make Liberia a post-conflict success story. We want it to be part of your legacy. We want you to be able to look back and say, when I was there I helped Liberia to be a success, to come out of the ashes of war and to be a successful economy responding to the needs of its people. Thank you for being there for us.

This story has been posted in the following forums: : Headlines; COS - Liberia