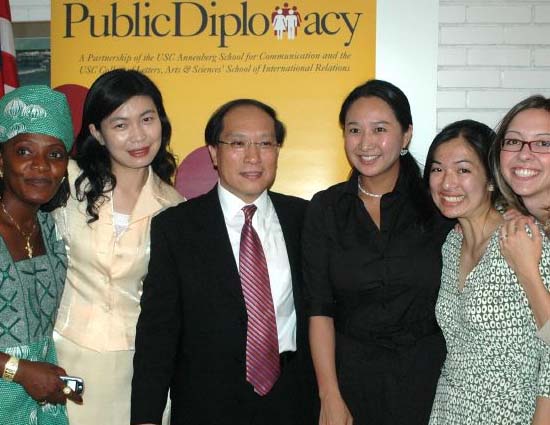 A film on the life of Elvis Presley showed him in his Army uniform, having just arrived in Germany, saying, "What we do here will reflect on America and our way of life." Clearly, Elvis grasped the concept that every American who interacts with foreigners – whether a business executive, nonprofit leader, tourist, student, athlete, or rock star – has an obligation to consider how his actions reflect on our country.

Public diplomacy begins with you
To revive America's image in the world, we all must be citizen diplomats.
By Sherry L. Mueller

Washington - President-elect Obama's intent to help "reboot" America's image in the world is most welcome But as the US retools its efforts to reach out beyond governments to foreign audiences, not all is what it seems.

In recent years, there has been an avalanche of academic studies, government reports, and think tank analyses that offer various "fixes" for US public diplomacy. In November, it made the Government Accountability Office's list of 13 urgent issues. Despite unprecedented attention, however, myths prevail:

Myth 1: The main goal of US public diplomacy is to improve America's image in the world. That, and countering anti-Americanism are certainly part of it. But the overarching goal is to build a web of human relationships that provides a context for traditional diplomacy – and outcomes commensurate with long-term US interests.

Myth 2: Everyone needs to get on the same page. A communications strategy is important. But reciprocity is at the heart of truly successful public diplomacy. We must listen as much as we transmit messages. A brass plaque reading "Telling America's Story" adorned the building housing the US Information Agency until its oft-lamented demise in 1999. Perhaps it should have read, "Telling America's Story Is Done Best by Good Listeners."

Myth 3: Public diplomacy is the government's job. Undeniably, there are appropriate and indispensable roles for government. But unless we accept the fact that each American has a role to play in putting Uncle Sam's best foot forward, we underutilize our best resource. As "The Ugly American" (a provocative and instructive novel published 50 years ago) put it, "Average Americans, in their natural state ... are the best ambassadors a country can have."

We must do more to encourage individuals to embrace their roles as citizen diplomats, to accept their part in helping to shape foreign relations "one handshake at a time."

A film on the life of Elvis Presley showed him in his Army uniform, having just arrived in Germany, saying, "What we do here will reflect on America and our way of life." Clearly, Elvis grasped the concept that every American who interacts with foreigners – whether a business executive, nonprofit leader, tourist, student, athlete, or rock star – has an obligation to consider how his actions reflect on our country.

Public diplomacy architects need to recognize the credibility private-sector partners bring to diplomacy efforts such as the State Department's International Visitor Leadership Program. Members of the National Council for International Visitors plan the professional appointments, cultural activities, and home visits for distinguished leaders chosen by US embassies to participate in short-term programs. These members of parliament, journalists, and others influencing decisions that affect US interests learn the most about who we are and what we value from their experiences in cities around the country.

Myth 4: The audiences we reach out to are exclusively overseas.

The Institute of International Education reported that during the 2007-08 academic year there were 624,000 international students enrolled in colleges and universities throughout the US, and an additional 106,000 international scholars here. Moorhead Kennedy, one of the American diplomats held hostage in Iran in 1979-80, wrote a book titled "The Ayatollah in the Cathedral" in which he made an observation that is still true:

"We have in the foreign student community in this country something that could be a terrible time bomb or a tremendous source of international understanding – both in what they come to know about us and in what American students learn from them. We are training a generation of leaders, and it is terribly important that our foreign students form a part of the community of the universities where they are studying, for their sake, but even more for our own."

We have to increase active dialogue with foreign nationals in our own country.

Myth 5: US public diplomacy is "broken."

In fact, many programs are extremely successful – but woefully underfunded. While public diplomacy depends on active engagement by citizens, not just government agencies, it is a necessary government expenditure. By increasing funding for these programs and supporting the public-private partnerships that have engaged so many Americans as volunteer citizen diplomats, we will reap tremendous benefits for generations to come.

Sherry Mueller is president of the nonprofit National Council for International Visitors.

This story has been posted in the following forums: : Headlines; Public Diplomacy